Magenta – We Are Legend (Album Review) 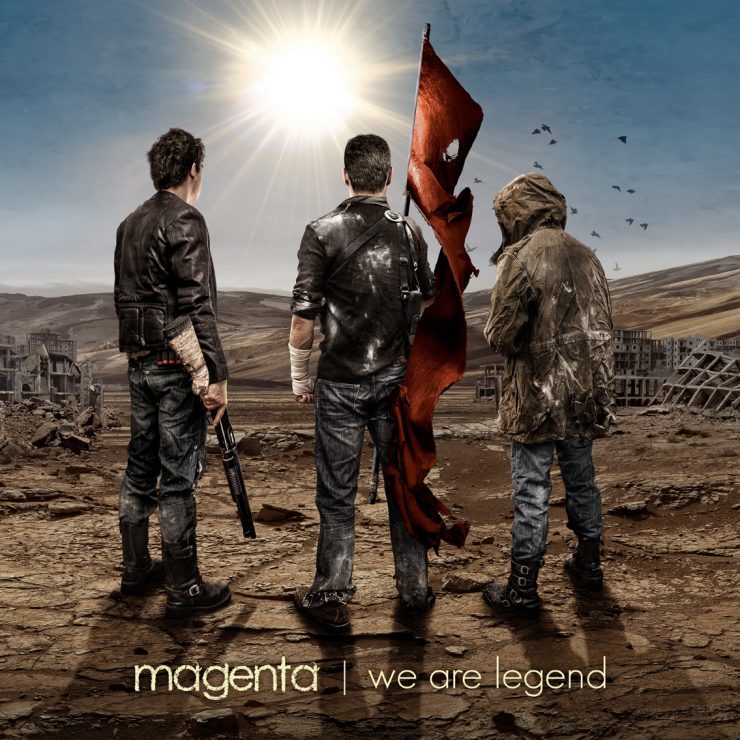 I openly admit that I am a Magenta fanatic – I have loved this leading Welsh Prog band for years. Having made that statement (but no apology for it), I am tasked with giving an objective analysis of Magenta’s long-awaited new album, “We Are Legend”.

Something that first attracted me to Magenta, particularly 2004‘s sophomore release “Seven” (one of my all-time favourite albums), was their ability to conjure Yes-like mindscapes, and make me feel the same sense of musical wonder that Yes created in the early 70’s. This was true Classic Prog, 21st Century style, with a stunning female vocalist. In Reed’s own words “Current prog bands are always scared and shy about admitting the influences of the great bands of the 70’s, and I wanted to…admit and celebrate those influences, and hopefully create something as worthwhile as those classic bands”. This he did, and we loved it.

One aspect that remained constant in Magenta’s earlier work was the extant presence of melody in every song. Melody emphasized by the unique combination of Reed’s composition and keyboard chops, Fry’s six-string excellence and Booth’s magnificent voice.

But after “Seven”, a few of the band’s releases variously displayed Reed’s penchant for wanting to “try something different”. This need, which was perfectly understandable for a musician of Reed’s stature, has, at times, resulted in varied responses, particularly when tougher or darker sounds were created (for example on 2008‘s “Metamorphosis”). There were, of course, many excellent moments on every album the band recorded, but the consistency of melody to be found on “Seven” was at times elusive. This matter was clearly and firmly addressed with Magenta’s 2013 release, “The Twenty-seven Club”. The latter was a clarion call, announcing that the classic sound of Magenta had returned. Very few people had a negative word to say about that album.

Which brings us to 2017, and guess what? When the new release was announced, Magenta’s eager fans were again informed that Reed was going to “try something different”. “Why,” I asked myself, “after the brilliance of The Twenty-Seven Club, would this great band want to change a thing?” I anticipated this release with a little trepidation, because I did not want the band that produced “Seven” and “The Twenty-Seven Club” to change. And honestly, I did not think that 2013’s masterful release could be bettered.

Well, dear Reader, you will be happy to know that my paranoia was completely unfounded. Change can indeed be good, and Mr Reed and his cohorts have just proved it. While this album is neither a repeat of “Seven” or “The Twenty Seven Club”, and it is in parts, even a departure from the Magenta of old, it is nonetheless brilliant in a different, yet still familiar way. While innovative and modern, it somehow remains faithful to the band’s classic roots, and is immensely fulfilling.

“We Are Legend” is comprised of one 27-minute epic and two shorter songs. Does this sound familiar? Well, you will be pleased to know that while Magenta have referenced their 70’s influences where necessary, they have also proceeded to innovate without compromise where they felt the need to do so, and the result is spectacular.

“Trojan” is a dystopian sci-fi story of war against machines attacking mankind from the ocean. A 27 minute journey, with several distinct parts, it starts with eerie keyboard sounds and a gentle melody that explodes into a heavy guitar passage – Magenta mean business. Early on, forceful new recruit Griffiths makes his presence felt, and while Reed and Fry call the instrumental shots, Nelson and Griffiths admirably complete an already formidable attack. We are under way, and Booth’s magnificent voice is introduced in one of the most powerful, driving verses that Magenta have created. A superb middle section, presenting the melody in gentler fashion, gives way to a stylish Fry solo at the sixth minute, after which Booth and the rest of the band play call-and-answer in a manner familiar to Magenta fans, but this time with a sci-fi twist.

There is a clear intention on this piece to give each performer a chance to shine, and this is in every manner successful. Above all, the song has every perspective you would desire in a Prog epic. Expect tenderness and anger, weight and light, dizzying mixed imagery, theatrical delivery, distinctly different parts stitched together into a common theme, and a strong pull at every one of your emotions.

The band is in top form and precision is the order of the day. Griffiths’ fills are perfectly worked out often to be exactly what Fry and Nelson are playing – it’s a considered performance, with every stroke carefully prepared, one believes, under Reed’s guidance. Fry’s guitar work, as always, is staggering. He performs jazz progressions with deceptive ease, and his interludes of acoustic picking are particularly tasteful. Of course his electric solos are, without exception, astounding. One also feels that Nelson, who despite his regular live appearances, recorded with Magenta for the first time here, has hit his stride with great precision and an immense sound. It goes without saying that Booth and Reed are magnificent performers, and deliver to the highest levels, as they always have.

With a song this length, the band is given room to breathe, and the composition goes through many peaks, valleys and everything in between. The main guitar solo is pure Floyd, and will unashamedly entice any Gilmour devotee. The gentle middle interlude gives Booth the scope to sound like an angel, with lyrics like ‘I look around in disbelief, our history is what brings me back to you.’ Her versatile voice goes from anguished wail to gentle caress, and reminds us that she more than deserves her numerous awards and accolades. Griffiths provides a roto-tom-like solo that is reminiscent of Pink Floyd’s “Time”, which leads into a section where Reed syncopates new-age keyboard effects with Griffiths’ double bass drum (possibly intended to conjure the huge robots marching forward). This in turn leads into a guitar riff that is pure Magenta and could have been on “Seven”. Finally, a gargantuan modern rock passage leads to an ending of consolation and peace. Are you getting the picture? It’s classic Magenta mixed with “something new”.

“Trojan” stands up with the best that Reed has delivered. Technical wizardry and copious instrumental dexterity are there, but they are never allowed to stand without reference to melody, which always commands the composition.

If there is a criticism to be made, it might be that sometimes Steve Reed’s lyrics can be stylistically repetitive. (For example he often to starts a line with a present participle such as ‘hoping’ or ‘thinking’, or an infinitive such as “to grow’ or ‘to live’.) This can become noticeable in its regularity, but a lyricist so prolific can be forgiven this foible.

Second song “Colours” is about Vincent van Gogh. It starts with what sounds like the music from a child’s toy or musical box, before exploding into a veritable layer cake of tortured progressive sound – as tortured as the man it describes. If the song is about the palette of a genius, the musical colours painted by the band conjure just that. Booth almost spits out the lyrics when adopting van Gogh’s persona, and she perfectly evokes his madness. The middle section once again features Fry in full Gilmour mode and Reed channeling Rick Wright. There is absolutely nothing wrong with that. The toy music returns to usher in an anguished build-up on organ, guitar and vocals, all counterpointing magically. Griffiths’ precision and tightness again display why he is the right choice for the Magenta drum throne. As van Gogh’s life reaches its tormented end, the band keep pace with the theme in a slow whirlwind of calculated musical madness, ending in quiet resignation. “Colours” is a great song that shows Magenta at their startling best.

“Legend” is a driving behemoth of a song about the last survivors on Earth, starting in 7/4 timing. Angular and pointed in its attack, melody is again not forgotten in the verses and choruses which are a perfect vehicle for Booth’s emotive range. Lots of modern sci-fi sound effects, created by studio artifice, are woven into the tapestry of the song (another “something new” for Magenta), but again, Booth’s melodious voice saves the song from the ordinary or the artificial. Fry’s solo is immense, and Booth’s refrain of “Its Over” will move you to tears. The final passage, a pastoral then triumphant slow-march to bliss, reminds us of the 70’s Yes influence that made us fall in love with Magenta to begin with. The closing of this passage ends the album on a massive tympanic climax.

The album’s excellent artwork has a dystopian sci-fi combat look that reflects the central themes in the music.

Despite challenges posed by Booth’s recent illness and some personnel changes, Magenta have never gone away. They are here to stay, and while there might be a new flavour, new members and some new sounds, the bedrock of tasteful 70’s Prog that is classic Magenta has also not gone away. It just has a new twist.

I could easily have been disappointed by this release, because “The Twenty Seven Club” created very high expectations for me. But that is not even mildly the case. Magenta have once again extended themselves beyond what any reasonable fan can expect, and have delivered something classic that will appease diehard fans, but also something new that might just conjure a new audience.

On the strength of this album, I remain a Magenta fanatic, and once again, make no apology for that.