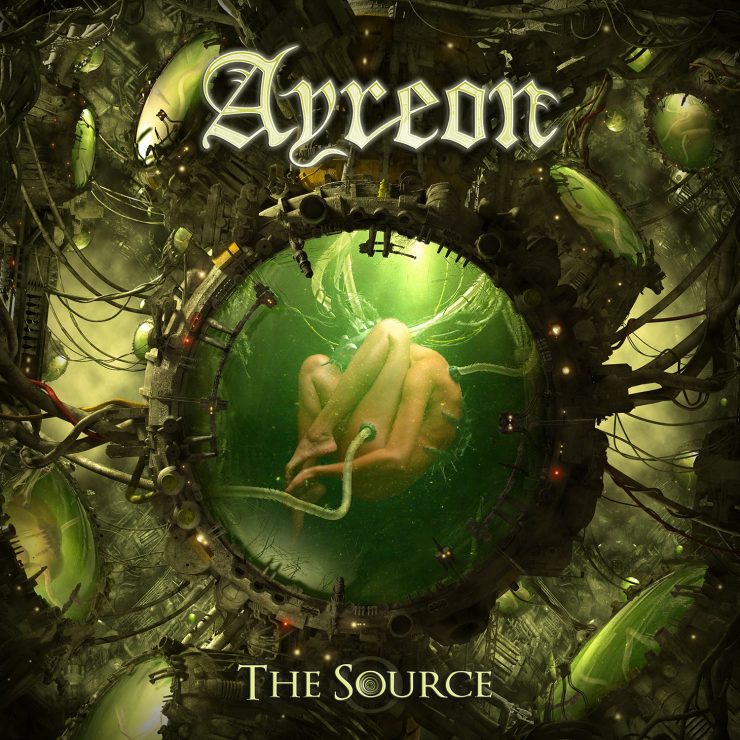 Arjen Anthony Lucassen’s Ayreon returns with ‘The Source’. For those who know and love Ayreon already, this mere statement of fact will probably suffice for a review. Indeed, everything great about past Ayreon albums is here on ‘The Source’, except that it’s bigger and more.  For you newcomers to the Ayreon universe, welcome! You’re going to enjoy your time here.

Like past Ayreon albums, ‘The Source’ is a huge musical-theatre-meets-progressive-metal production. The plot is a relatively straightforward sci-fi extravaganza that serves as prequel to ‘01011001’ and includes several connections to that album, including references to “Liquid Eternity” and the “Age Of Shadows,” as well as lyrics sung in binary code. However, the story is self-contained, recounting how a worldwide computer tasked with sustaining human life on the planet Alpha decides to extinguish human life instead, whilst a small team of people escape to the distant ocean Planet Y to propagate the species there. The team escapes the dark death of a ‘Sea Of Machines’ for a dark life as an ‘Aquatic Race’; thematically, this is a basic sci-fi take on the cyclical futility of technological progress and ‘The Human Compulsion’ to repeat our worst mistakes.

Musically, long-time Lucassen collaborator Ed Warby leads the charge with his nearly relentless powerhouse drumming across bombastic musical numbers influenced by best of mid-70’s to mid-80’s heavy metal, hard rock, prog, AOR, Andrew Lloyd Webber, and of course Lucassen’s own vast catalogue. There’s a lot going on here, but Warby is front and center in an incredibly clear mix that respects both vocal and instrumental separation. Chalk that up also to Lucassen’s superb arrangements that coordinate thirteen vocalists and a plethora of instrumental flourishes in such a way that everything sounds exactly in its place. Opening track “The Day That The World Breaks Down” encapsulates the album’s musical synthesis with its introduction of most of the featured vocalists, progressive textures of Canterbury-inspired flute and Kansas-esque violin, almost industrial riffs and synth swells, Hammond vamps, and blues grooves. Just when the epic begins to wind down, Floor Jansen’s soul-shaking vocal sounds the Reveille.

Again, the album as a whole sounds like the best of Ayreon’s past, but more guitar-oriented and with even more musical texture. “Everybody Dies” invokes Webber in its big cast vocal workout—including growls—and is such heavy fun that one might suspect Lucassen of a bit of mischief in making this description of worldwide death and destruction such an upbeat sing-along track. “All That Was” quiets down a little to allow the characters a bit of emotional reminiscing before the full-on gallop of “Run! Apocalypse! Run!” offers its glimpse of an alternate musical world in which Rick Wakeman joined Iron Maiden for ‘Powerslave’. As the small remnant of humanity escapes destruction, “Deathcry Of A Race” combines the heavier moments of Jethro Tull with Mediterranean string sounds and evocative Arabic vocals. “Into The Ocean” deftly weaves together classic Deep Purple Hammond organ and Dio-inspired vocals, while the proper closing of the story on “Journey To Forever” takes Rabin-era Yes vocals and guitars for its musical framing.

‘The Source’ is more than a sum of musical influences, of course; the album sounds less like a pastiche than it does like Lucassen had a ton of fun working little tributes into his own distinctive idiom. This sense of fun and bombast, augmented by the precision of the arrangements and virtuosity of the performances, lifts ‘The Source’ above the confines of its conventional storyline.  The number of guests that contribute outstanding performances are almost too many to count including the likes of James Labrie, Tommy Rogers, Russell Allen, Paul Gilbert, Guthrie Govan and man, many others.  There’s just so much here to satisfy a listener, and this reviewer has played the album on repeat for weeks. It’s unlikely that 2017 will see another release this expansive, energetic, varied, and fun. While many anticipated releases remain on the calendar, just see whether ‘The Source’ doesn’t spend more time in your car than any other album this year.

Check out our recent interview with Arjen Lucassen here.

Key Tracks: The Day That The World Breaks Down, Everybody Dies, Run! Apocalypse! Run!, Deathcry Of A Race, Into The Ocean, The Source Will Flow