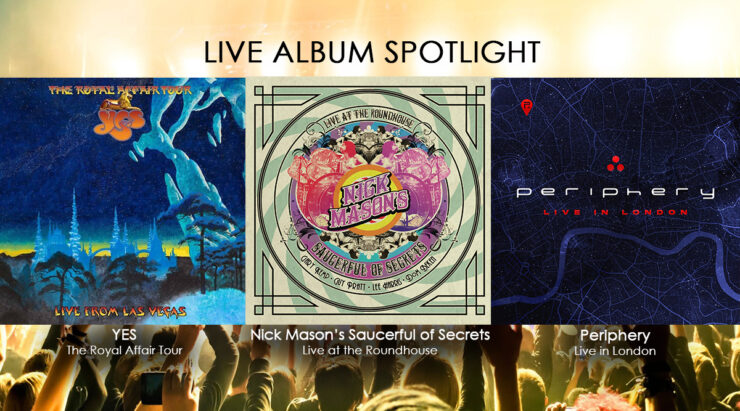 This is a Live Release roundup of new and recently released live albums.

In recent years, Yes have issued many live albums, marking the various tours they have undertaken. For fans these releases are a chance to have a pro quality souvenir of the shows and to hear how the current line up of the band celebrates the legacy. With Billy Sherwood, Jon Davison and Jay Schellen joining Steve Howe, Alan White and Geoff Downes, many of the songs here are played for the first time with this line up. A super charged version of Time and a Word’s No Opportunity Necesary… with Steve Howe nailing the Peter Banks guitar parts, gets them off the starting line at speed, with momentum maintained during Tempus Fugit and Going For The One. A highlight of the album is a beautiful version of Chris Squire’s Onward which has gained particular poignancy since his passing, while a version of John Lennon’s Imagine probably made more sense in the set list of the revue style show than it does here (granted Alan White drummed on the original!). The Roger Dean art work is probably the best of the recent live releases, and this combined with a photo book and fantastic layout mean there is a lot to look at while you listen.

Perhaps one of the biggest surprises of recent years was the return of Nick Mason as a touring artist and this live set captures, in audio and video, the experience for anyone who missed it.  The set list is made up of the material that was largely dropped when Dark Side of the Moon came along, and dates back to their debut album with Syd Barrett. The fantastic band, which features Guy Pratt and Gary Kemp, bring this rarely played material to life, with energy and an audible glint in their eyes. You get “the hits” (Arnold Layne, See Emily Play) and deep cuts like The Nile Song and excerpts from Atom Heart Mother, powered along by Mason who is playing with all the vigour of his younger self! Kemp and Lee Harris have the guitar parts and styles covered, while the Barret/Waters/Wright/Gilmour vocals are shared between Pratt and Kemp bringing a cohesion to the overall set. Every town has its own Pink Floyd tribute band, but none of them could capture the joy and fun this line up bring to this often ignored material.

Periphery have announced their first live album, releasing the 10-song Periphery: Live in London. The varied track list includes music from throughout the D.C.-born band’s discography. The band sound as powerful as ever on this set opening with the epic “Reptile” from their recent album Hail Stan, before diving into more tracks from that release. Other highlights include “Marigold” and “Blood Eagle”. Vocalist vocalist Spencer Sotelo shows off his incredible vocal range, while the drumming of Matt Halpern is powerful and up front. Additionally, the mix is impeccable. Fans of the band have long been waiting for a live release from the band and this one certainly does the band justice.