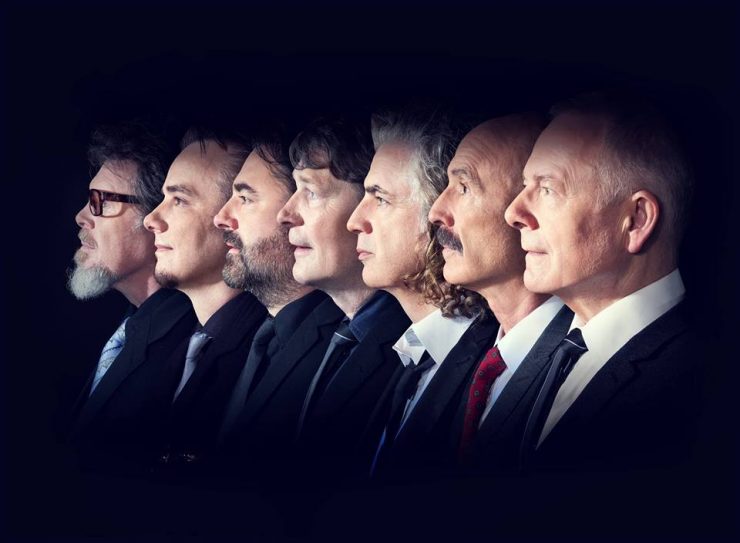 Seminal rock band King Crimson begins their 2017 North American tour with the summer leg including a 17-show run spanning June 11 to July 10. The “Radical Action Tour 2017” will begin at Seattle’s Moore Theatre on June 11. The tour will run through cities Saratoga, Oakland, San Diego, Los Angeles, Denver, and Minneapolis. King Crimson ends June with appearances at the Chicago Theatre on June 28 and Kodak Hall in Rochester on June 30.

The band begins July with a swing through Eastern Canada including an appearance at the Montreal Jazz Festival on the 3rd and at Toronto’s Massey Hall on the 5th ahead of a stop in Quebec City on the 7th. Crimson will play two shows at the Count Basie Theatre in Red Bank, New Jersey on July 9 and 10 before heading to Mexico City for shows on July 14 and 15. King Crimson also revealed, “there will be further dates in the autumn, to include New York City.”

With four drummers up front including Pat Mastelotto, Gavin Harrison and Jeremy Stacey, as well as the return of multi-instrumentalist Bill Reiflin, guitarist, and original founding member, Robert Fripp, states that this “double quartet formation” is likely to make more noise than ever before. Rounding out the eight piece line up are guitarist and vocalist Jakko Jakszyk, bassist Tony Levin, and saxophonist Mel Collins, also an early member of Crim.

As well as standard tickets, the band’s label, DGM, also has announced sale of VIP Royal Packages, limited to just 50 per show. Details can be viewed at the label’s interactive and recently redeveloped website, www.dgmlive.com.

Coinciding with the first leg of the tour, King Crimson will be releasing a CD EP featuring their version of “Heroes” recorded in Berlin during the band’s 2016 European tour. Robert Fripp, who plays the unforgettable guitar on Bowie’s original version, writes, “King Crimson performed ‘Heroes’ at the Admiralspalast in Berlin as a celebration, a remembrance and an homage. The concert was thirty-nine years and one month after the original sessions at the Hansa Tonstudio overlooking the Berlin Wall. This is released in the Fortieth Anniversary year.”

“Heroes – Live In Europe, 2016” is set for release on June 2nd 2017 and can be pre-ordered via the shops at www.dgmlive.com as well as available through traditional retail outlets. The US based Schizoid Shop has recently added a range of new shirts and other band-related merchandise, and offers weekly specials including offers to win free tour tees. www.schizoidshop.com.