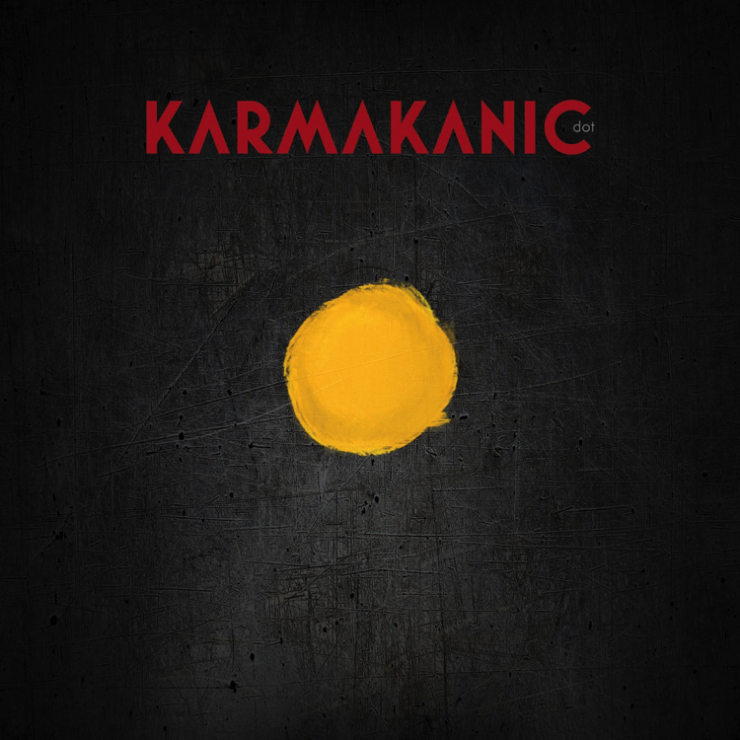 Full disclosure: I have been a massive Karmakanic fan since a friend introduced me to “Entering the Spectra” in 2002. The rest was personal musical history because I have been in love with this Swedish band ever since, and the love has grown with every release. 2003’s “Wheel of Life” stands out for me as one of the greatest Progressive Rock albums of all time. It’s no surprise, then, that I, and many others, have been looking forward to the new album “Dot” with huge anticipation. But I have tried to write this review not as the Karmakanic fan that I admittedly am, but rather with whatever objectivity and distance I can muster.

The core band is imperious bassist/producer Jonas Reingold, vocalist Göran Edmann, keyboardist Lalle Larsson and drummer Morgan Ågren. It goes without saying that they, and all their accompanying guests, are dazzling, world-class musicians. Enough about that – let’s determine how “Dot” stands up in the context of all this expectation.

First song “Dot” is a series of cosmic sound effects, introducing the album’s thematic context (that the Earth is just a tiny dot in the universe and humanity’s conflicts are insignificant in the greater scheme of things). It is a sonic prelude that builds to the opening of the magnum opus that is “God, the Universe and Everything No-one Cares About Part 1”.

When Karmakanic create a long-form composition, they don’t mess around. “God…Part 1”, at almost 24 minutes, has everything an authentic Prog epic should have, and then some. Imagine a soundtrack to the journey of a 25th century spaceship exploring the cosmos with a message for and from Planet Earth, encountering interstellar danger, beauty, mystery, conflict, wonder, mayhem and revelation.   It starts with a gentle piano riff (that begins this song and also ends the album.) Reingold’s signature fretless sound provides the foundation for the intro, and Edman’s immediately recognizable voice sets the lyrical scene. Matters become surprisingly heavy quite early after the first verse, followed by a fat vocal bridge in 14/8 timing. Then the core compositional theme is presented in Baroque guitar, flute, keyboard, fretless bass and who knows what else, until the vocal progression gives way to a gentle middle section that is breathtaking in its beauty. Literally “lost in space”, it changes key and builds with intent. References to the Milky Way, cosmic dust and the carrying of the human message “far and wide”, lead back to the refrain, only this time presented in colossal symphonic grandeur. A frantic jazzy keyboard solo in impossible timing gives way to what sounds almost like a children’s choir “at the edge of the world” (no doubt in reality backing vocalists Christine Lenk and Alex and Norah Reingold) that then combines into a syncopated instrumental Prog extravaganza, such that only Karmakanic could deliver.

It’s complex, it’s interesting, it’s provocative and it’s challenging. And it’s fantastic. Filled with melodic and rhythmic complexity, peaks and troughs, highs and lows, weight and light, stabs, rests, solos and surprises, “God…Part 1” has everything, and every passage is new and musically fulfilling. Myriad moods abound in this masterpiece, so that just when you think you have grasped it, a new surprise awaits you. The lyric “a stone is still a stone, a rose is still a rose” re-introduces Edman and the thematic context, and this glorious monster of a composition finally ends with the core lyric of the album’s theme “We are all just nothing…” Fabulous.

Third song “Higher Ground” is a brilliant piece of melodic Prog in which Nils Erikson’s lustrous voice is given centre stage. Every musician in this band is an absolute virtuoso, and that just cannot be ignored, but Erikson’s lead vocals are never to be underestimated in this context. Without his immaculate voice, the instrumental exploits of his band-mates would not bear the illusion of accessibility that Karmakanic’s complexity deceptively also offers. His voice is at once rich, smooth and melodic. It is also unique – I can’t imagine Karmakanic without him. The chorus is so utterly gorgeous as to extract tears from the listener, and the song then builds to an understated but hugely emotional crescendo. A pastoral acoustic guitar structure appears in the middle, and it is appropriate, since it is a backdrop to a lyric of exploration for a better life of freedom. Another intense keyboard solo over a thundering Reingold bass-line overwhelms the listener. Then a sweet keyboard melody gives way to an intentionally distorted guitar that morphs into smooth and spacey electric lead solo and ultimately, Erikson’s lonely climax of “here we stand in no man’s land”. It ends the song with huge, heart-wrenching resolve. This song is so pleasing and well-constructed that it could be a sonic multi-layered gourmet dessert with extra cream offered to a hungry child. Prepare to want more.

Fourth song “Steer by the Stars” is a surprising highlight of the album for me. It has a straight-ahead feel based on uplifting pop melodies with soaring harmonies and a strong hook. My head was bobbing up and down within seconds. I don’t ever dance, but if ever there were a song to get me to do so, this would be it. Melodic Prog-pop rich in harmonies and brilliant instrumentation based on a simple yet somehow not uncomplicated premise. Call it the Karmakanic paradox if you will – this is a fine example of the very best of the music that anyone can love. It is just jaw-droppingly beautiful and ends on an a capella vocal harmony counterpoint with a nod of respect for Gentle Giant. If there are those that believe Karmakanic are always grandiose and overblown but never simple or understated, this song will put them right. Brilliant, uplifting and gorgeous. Oh, and it’s in 4/4 timing.

That unmistakable fretless bass once again introduces fifth song “Travelling Minds”. The core theme reprises, only this time at the hands of the bass maestro. Before long the song explodes into a full, slow, bluesy expedition that one feels would not be out of place on a Yes album in their heyday. ”We’re dreamers, we’re seekers, we’re travelling on…We’re travelling fast on the road to desolation. But we have a choice…share some light…reject the night.” It is big, grand, symphonic and intensely moving.

Final piece “God, the Universe and Everything Else No-one Really Cares About – Part II” completes this astonishing journey of introspection with a massive symphonic and vocal re-examination of the core theme, bringing us back in glorious fashion to the original delicate piano riff that began “Part I”. It is so intensely beautiful and emotive that I was genuinely moved to tears. The song is grandiose, challenging, melodic, and rich, and is a perfect end to a consummate album. The last note, a solitary, plaintive piano chord of hope, left me pleading internally for more.

Is “Dot” as ground-breaking as 2003’s “Wheel of Life”? Probably not. Are its arrangements quite as jaw-dropping as 2008’s “Who’s The Boss In the Factory”? No. But that doesn’t mean it disappoints – not in the slightest. On the contrary, this release is a clear contender for Album of the Year.

Karmakanic, as musicians, were moved by new questions and emotions when they created this album, and you can hear it.

Thus, in addition to the now familiar stellar musicianship of each band-member, “Dot” also offers something new that is just as valuable as Karmakanic’s famous virtuosity – a beautiful, philosophical melancholy that Karmakanic have never fully exposed before; an existentialist examination of life, the world, and a musical reflection on how small our problems and conflicts really are in the greater scheme of things. (Who knew that Jonas Reingold was such a philosopher? Isn’t it enough to be the best bassist in the world?) “Dot” reveals a something more contemplative, but just as pleasing, as Karmakanic’s previous offerings, while never detracting from the melodies, remarkable time-signatures and jazzy Prog arrangements that the band is known for.

Quite predictably, I adore every second of this album. Again, I am myself, and that self is a huge Karmakanic fan. But honestly, it will not make any difference that you are not me. If you love Prog, if you love beauty, if you appreciate stellar musicianship, if you are remotely interested in music that will move you deeply, you cannot fail to love Karmakanic and “Dot”.