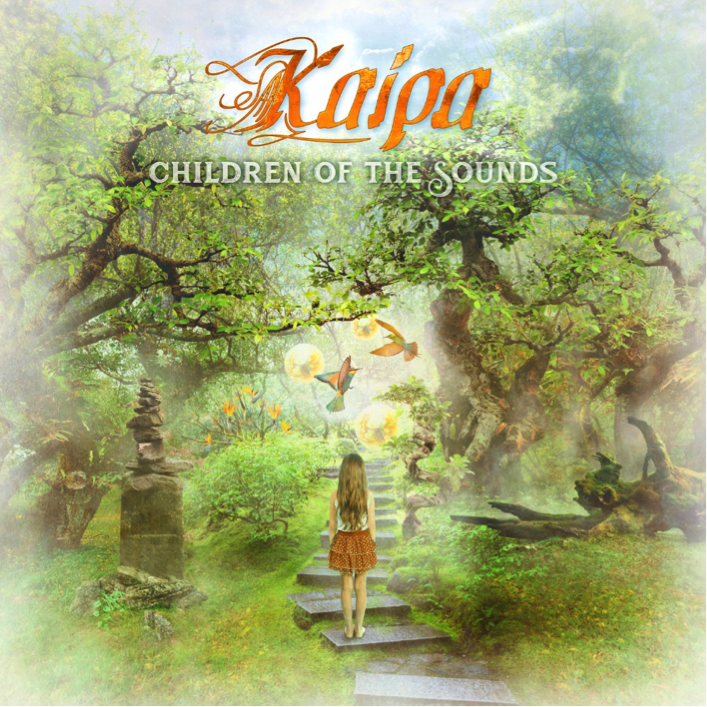 Review of the album Children of the Sounds out on September 22nd, 2017

Formed in 1973—and then reformed in 2001—Swedish sextet Kaipa is one of the most immediately enjoyable bands in the genre. Indeed, their modern blend of melodic cheerfulness, earthly textures, and invigorating, downright fun complexity makes their music remarkably luminous, catchy, and heartfelt (even when compared to the organic brightness of national siblings like Rikard Sjöblom, The Flower Kings, Karmakanic, Änglagård, and Moon Safari). Naturally, the group’s 13th studio LP, Children of the Sounds, upholds such excellence without fail. Arguably even more touching, unforgettable, and fluid than its wonderful predecessor, 2014’s Sattyg, the record is yet another radiant sequence as only Kaipa could provide.

Once again joined by guitarist Per Nilsson, bassist Jonas Reingold, drummer Morgan Ågren, and vocalists Patrik Lundström and Aleena Gibson, founding keyboardist/singer Hans Lundin notes (in the official press release) that what “really made [him] push the start button” on writing Children of the Sounds was seeing a Mats & Morgan Band show in November 2014. He explains: “I woke up the morning after the concert and still felt that enormous groove filling every part of my consciousness. I realized that I had to canalize all this energy somewhere, so I decided to start to write some new music.” In addition, the prior summer saw him taking lengthy bike rides around Uppsala that made it feel like “the notes were rising up from the billowing fields . . . and the words were falling like raindrops from the clear sky.” Combined, those experiences acted like “the key to open up all these ideas that had been slumbering at the back of [his] mind for a while.” The result is five virtually impeccable tracks—varying in length from seven minutes to seventeen—that pack plenty of joyful accessibility and somber density.

The title track kicks things off with a mournful mixture of strings and woodwinds. Soon after, Gibson’s lone angelic rasp cascades over the backing for a bit before being complemented by Lundström as more instruments come in. As usual, they make for a lovely duo, issuing typically inspiration lyrics like “Out of the aged / We’re building something new / We are messengers of sounds from our hearts / We are universal soldiers of art” while Reingold and Nilsson build momentum with alternating dominance. Of course, Ågren provides interesting and fitting syncopation throughout, especially as the arrangement becomes extremely fanciful and elaborate. Just about everyone shines during the track’s extended instrumental voyage, which is refreshingly dynamic, unpredictable, and hypnotic as they play around the central melodies with vigor and creativity. It’s a testament to how progressive rock can be simultaneously infectious and intricate, and it leads back to the Gibson and Lundstrom’s harmonies beautifully as it ends, bringing the piece full circle.

The subsequent two songs follow suit very well. Specifically, “On the Edge of New Horizons” makes exquisite use of its over quarter-hour duration with lots of colorful keyboard and guitar wizardry, while “Like a Serpentine” focuses more on songwriting and singing, recalling Gabriel-era Genesis in its fusion of quirky narration and majestic musicianship. In particular, guest violinist Elin Rubinsztein soars in conjunction with regal acoustic guitar strums and whimsical rhythms about halfway through.

Likewise, the penultimate “The Shadowy Sunlight” finds Rubinsztein evoking downright Shakespearian elegance at the start as a catalyst for the epic tension to come (with Ågren keeping the drama grounded as ominous vocal layers declare prophetic observations alongside fiery guitar and bass licks). Closer “What’s Behind the Fields” provides some of the most hypnotic and pleasant passages on Children of the Sounds, with an overarching lightness that makes its occasional bursts of intensity even more impactful. Once again, acoustic chords meld with violin, tempered percussion, and robust, characteristic odes that can’t help but encourage and delight.

Like its precursors, Children of the Sounds is a perfect prog rock channeling of Gaia. Sure, each player excels as both an individual master and a crucial cog in a cumulative wheel, but that could also be said for countless other acts. What truly makes Kaipa stand out here, as always, is the ways in which they create celebratory sonic worlds filled with a childlike sense of wonder, hope, and possibility. Rather than aim for soulless virtuosity (as a fair amount of their peers do), they make each technical moment serve the central goal of enveloping the listener in an aural fairytale of colorful, life-affirming compositions. Children of the Sounds is as fine an example of that as any other Kaipa record—or any other modern genre LP, for that matter—and it should be cherished as such by as many people as possible.

Released on September 22nd on InsideOut Music
Key Tracks: Children of the Sounds, On the Edge of New Horizons