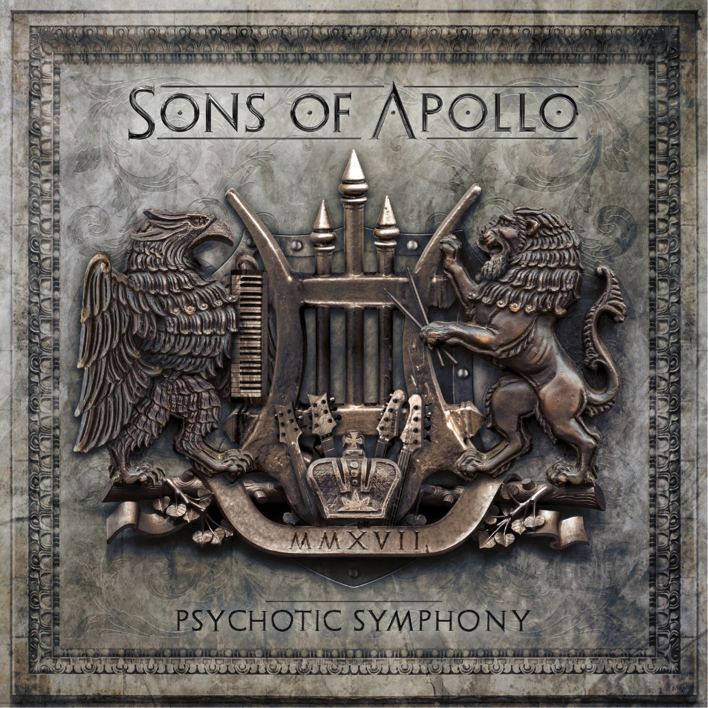 Review of the new Sons of Apollo album – ‘Psychotic Symphony’, out on October 20th, 2017

This review could easily have begun with a statement about a particular drummer’s ubiquity and work ethic. But it should not do so, because this is about the debut album of a genuine band of equal musicians. It happens to be a band with some very famous names, some of whom have previously worked together in noted projects, but let us leave the history at that. Like an army, a band needs leadership and direction, but it also needs common ambitions and a common identity. Due to each member’s history and experience, Sons of Apollo offers exactly that, with loads of aggression to boot.

Due to its line-up of super-heroes, Sons of Apollo’s debut has been anticipated with nothing short of frenzy in rock circles. Teaser releases have been met with hysteria, and the album itself has been the subject of extensive fan speculation. Will it be Prog? Will it be Rock? Will it be Metal? What surprises lie in store? What can this band do that has not been done before?

The line-up itself, of course, provided some clues: drummer Mike Portnoy needs no introduction, and he happens, in this band, to be in the trenches with his former cohort in Dream Theater, keyboardist Derek Sherinian (also of Black Country Communion).  Joining the duo are Portnoy’s partner in The Winery Dogs, Billy Sheehan, on bass (Mr Big, David Lee Roth), guitarist Ron ‘Bumblefoot’ Thal (Guns ‘n Roses), and vocalist Jeff Scott Soto (Trans-Siberian Orchestra, Yngwie Malmstein). Right there, an impressive army has been formed. I hesitate to use the overworked term ‘supergroup’, but could there be a more enticing mixture of Classic Rock and Prog legends? Hardly. This embryonic cohort of musical snipers performed a gig as early as 1 August 2017 at David Z’s memorial jam in Los Angeles (during which Deep Purple’s ‘Burn’ and Van Halen’s ‘When the Cradle Will Rock’ were covered.) At the gig, Soto stated: ‘You are watching history tonight’. Later on, Sherinian made several fairly bellicose comments such as ‘no more whiny, breathy vocals’, ‘a lethal combination’, ‘Apollo was the God of music and we are his mighty offspring’, and ‘this is the band that will generate the most heat’. Battle lines drawn.

The core of Sons of Apollo was initially formed in 2012 when Portnoy, Sherinian, Sheehan along with guitarist Tony McAlpine toured as an instrumental four-piece (PSMS) after Portnoy’s departure from Dream Theater. Sheehan and Portnoy later formed The Winery Dogs with Richie Kotzen. With that group on hiatus, the timing was right for this new project. Now the Sons of Apollo album, entitled ‘Psychotic Symphony’ has arrived, produced by Portnoy and Sherinian (also affectionately known as “The Del Fuvio Brothers”.) It is time to discard the hype and analyze the musical product of this exciting line-up of virtuosos.

An eleven-minute Prog-metal epic named “God of the Sun” opens the album. It starts with a middle-eastern theme, then moves immediately into a Prog-metal movement that surrenders to Soto’s classic vocal style, and proceeds to make a clear Prog proclamation that you’d better be ready for anything. It is portentous. The two songs teased on the internet were, intentionally it seems, more straightforward, but this one declares that you should have known better than to think that the rest of the album would be similar linear rock. It is replete with impossible time changes, it swings wildly between structural themes, warlike and peaceful, and it declares that this band is Prog, only different. While complex, fresh and contemporary, “God of the Sun’ at the same time often harkens back, in the best possible way, to Deep Purple’s Coverdale era. Soto’s voice has that very desirable effect. There is an extremely complex, stabbing instrumental passage nestled in the heart of the song that fires a warning shot about this band’s intentions, like an intercontinental ballistic missile. After this, the middle-eastern riff and Soto return to complete the mission with a flourish. Gods of music indeed – this song is simply gargantuan.

Sherinian opens the second track ‘Coming Home’ with a driving keyboard riff, and the band keeps the missile on track with a solid metal groove. The song again exposes the already familiar, yet brand-new bass sound created by Billy Sheehan for this band. Portnoy has also changed up his sound for this project, with a completely un-dampened drum sound, especially on the snare, and he is incendiary throughout. This is a straight-ahead rock song with a familiar chorus, and song-writing reminiscent of a myriad 20th Century rock bands including Van Halen and (of course) Deep Purple. But that fact soon becomes irrelevant – it works well when delivered by these musicians because of the synchronicity with Soto’s voice. His scream is ubiquitous, Thal’s guitar acrobatics are as good as Eddie Van Halen’s, the band are in a no-nonsense mood, and the song rocks – plain and simple.

Supremo bassist Billy Sheehan’s astounding new bass sound opens third song “Signs of the Times” which has been available for some time on the Internet,. Sheehan has made a point of not re-hashing the immense sound that he is already known for – he has created something genuinely new and special for this band. It is more of a pounding, electronic growl than a standard bass sound, and it works magnificently. The song is by now well-known, and except for Sheehan’s bone-rattling riff, is mostly standard rock fare, though it hints in places of the complexity to come. Thal’s shredding solo requires special mention: several words, including ‘sublime’ and ‘spectacular’ come to mind, but none will really do, so let’s just leave it at that. This man will kick your behind like no other guitarist, and with Sheehan and Portnoy laying an impenetrable foundation beneath him, the result is nothing short of guitar heaven. Sherinian’s ‘lead-guitar keyboard solo technique’ is well-known and is also exploited to the maximum on this song, and elsewhere on the album. The song ends as it begins, with Sheehan’s monster riff.

Sherinian’s synths dominate the aptly-named “Labyrinth” with Thal. Though introduced by a pleasant keyboard riff, it soon builds to a weighty metal verse, then a Prog bridge, and suddenly the riffs in the middle section are as complex and precise as those of any math-metal band, but somehow more accessible. This band is very clearly not afraid to Prog out with the best of them. The ghost of Dream Theater lurks, Jon Lord is again conjured in the keyboard solo, and musical mania pervades. The harmony arrangement makes full use of all five members, and Sherinian proclaims his right to be regarded as highly as any keyboardist in Prog-metal. This song is indeed eight minutes of sonic labyrinthine madness that finally ends with a Sherinian arpeggio lost in a whisper. Whether you’re a progger or a Metal Head, you will love it.

“Alive” is as close to a ballad as the album comes. A song about conquering demons and redemption, it is dark and heavy, with Soto providing suitable nuance and inflection to every tortured syllable. Even in this song, Sheehan’s bass growl is featured in places, and yet again it works beautifully. Thal shows his gentler side in the jazzy solo. The lyrics are a tense accompaniment to the slow, staccato, robotic march: “Jaded, I’m jaded, kill the monkey in my veins, Sink or swim…I’m fading, I’m fading.’ Enough said.

Speed mania returns with “Lost in Oblivion”, which starts aptly enough with an air-raid siren. The missile is in full flight now, and you’d better strap in, because these boys are angry. With the musical gloves now well and truly off. Portnoy is let loose on the machine guns that are his twin bass drums, and Thal is right behind him, providing cover fire. It really is an oddity that this guitarist is not more recognized as the Prog virtuoso that he seems to be. The arrival of Sons of Apollo will no doubt address that oversight. Soto’s vocal technique is not unique by any means, but on this song in particular, he shows the credentials that undoubtedly led to his inclusion in this band. Portnoy and Thal embrace closely in a middle section that is arranged and played with precision and exactitude. The sirens return, mad metal oblivion prevails, and the song ends on a huge instrumental eruption.

“Figaro’s Whore” is a short showcase for Sherinian’s ‘lead guitar’ keyboard solo technique, and leads into “Divine Addiction”, an all-in, mid-tempo rocker in which Deep Purple meets Dream Theater meets every classic rock band you’ve ever loved. The lyrics are a little predictable at times (‘beggin’ you to stay…comin’ your way…’), but not enough to dampen the success of the song, which ends (a little unnecessarily) on a fade. Jon Lord and David Coverdale would be reasonably proud of the legacy they have left, but ‘Divine Addiction’, while far from displeasing, is not the high point of the album. One almost feels that the band wanted to get this one done so that they could move into more challenging territory. And that they do.

The closing song is called “Opus Maximus” for an obvious and good reason. Imagine a Prog-metal missile, pointed with mathematical accuracy, nearing the end of its journey to hit target, because that is precisely what happens – a musical explosion of atomic proportions. After the intro, there is an ominous melodic bridge, whereafter the band lets loose with full abandon to the most extreme proclivities of any top-tier Prog-metal outfit. Any who claim that this band is not Prog will be silenced at this point. That snarling Sheehan drone is back, mind-boggling technical chops are everywhere, and the band lets loose with vengeance. And I do mean vengeance. It’s almost as if every conflict that these fine musicians may have had with their previous bands is answered in the best possible way – with startlingly fine musicianship, performance technique second to none, and a literal finger in the face to any who might claim to be pretenders to the Prog-metal throne. The compositional complexity is as extreme as any you have ever heard, the arrangement is intentionally over the top, and the performance is pretty much super-human. It is so complex that you should expect it to take a good few listens before you find the reward, but when you do, it will stay with you for a very long time. In a statement of reconciliation, almost like the end of a war, the epic ends in a huge slow climax that terminates with a single keyboard note left drifting into the distance.

Don’t be fooled by the unbridled, belligerent power of ‘Psychotic Symphony’. With very few exceptions, this album is highly cerebral music, and it is not for the musically faint-hearted. It is a statement – a declaration that these five stellar musicians intend to take over the planet, and it will not be a fair fight. It is heavy, packed with power, innovative, progressive (in all senses of that word), and yet not at all inattentive to the members’ childhood influences. Several of the members seem to have gone to great lengths to create new sounds for this band, while not disrespecting their classic rock roots. Each of them, of course, has an excess of the talent and chops required, but it is the passion and aggression with which they have tackled this project that stands out.

Expect no quarter, because none will be given – the Sons of Apollo have launched their missile, and it is headed right at you.