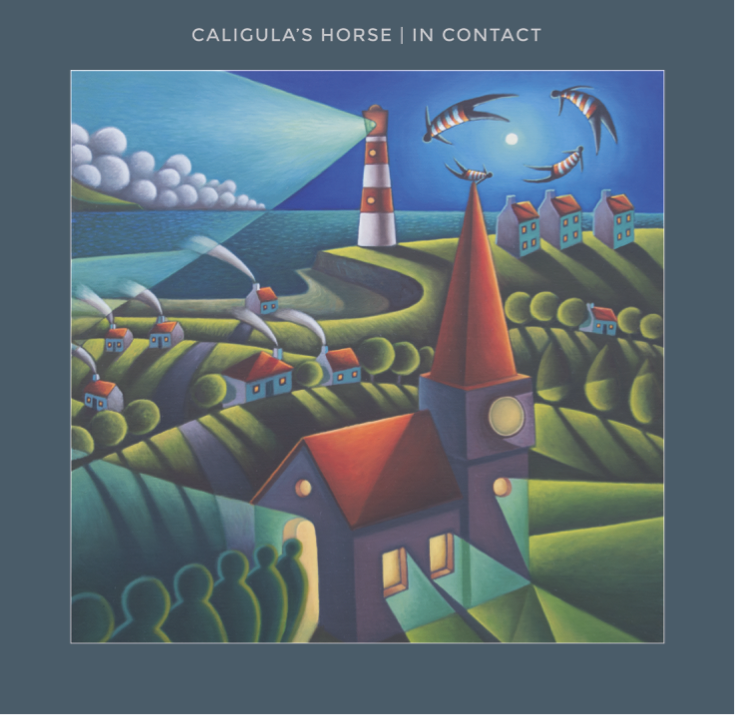 Early single “Will’s Song (Let the Colours Run)” flexes the band’s metal muscle with galloping drums and rumbling bass from an ace rhythm section; here as elsewhere Josh Griffin and Dave Couper prove themselves equally comfortable with quick technical changes as with anthemic grooves. Adrian Goleby’s pounding riffs play a dual role, in places adding heaviness as a third member of the rhythm section, at other times providing distinct midrange textures. In Contact is far from a one-trick pony, however, and the band insert two shorter, more genteel pieces amidst the rock. “Love Conquers All” opens with some lovely acoustic picking but rather generic programmed percussion behind Jim Grey’s delicate, plaintive melodies, while “Capulet” opens much the same but distinguishes itself by dropping the programming and adding some quiet organ swells and angular guitar leads.

Between these ballads rises the album’s centerpiece. “Songs for No One” showcases this band’s aptitude for varied intensities, soaring vocals, chunky riffing, and incredible guitar leads. Sam Vallen stars here, alternating between atmospheric complements to the vocals and piercing solos that blend classic NWOBHM lyricism with a refreshing angularity. The song is well-placed, serving as an early musical climax that also pushes forward the album’s emotional themes—a song of determination to be played out in the album’s second half. “Fill My Heart” strikes a similar balance of musical and emotional intensities with insistent lead guitar, various accents (including some very nice programming), and acoustic guitar and lead vocals that could well provide the soundtrack to a very intense late-night prayer before a blazing, ornate fireplace.

Spoken word track “Inertia and the Weapon of the Wall” is the prog-metal equivalent of a poetry slam, and Grey is to be commended for his deft handling of both the poetry and the slam. Unaccompanied except for occasional vocal effects, he nimbly steps from angry rant to sagacious whisper before nearly spitting the final words. “We are the very fingertips of life’s outstretched hand…the one thing that unites us/Is reach/We reach/Forward…And the writing on the wall you love was hand-penned by the Censor/So spit in the cannon’s mouth/And tell ‘em Ink sent ya!” Resounding, martial drums and bass kick in as an incredible segue from these words to the next track, “The Cannon’s Mouth.” The transition is invigorating, and the band builds from there to one of the album’s heaviest, most satisfying moments of catharsis. After a brief interlude, Caligula’s Horse launch a proper progressive epic with closing track “Graves”. Featuring several guitar solos, sax sounds for colour, and a lovely clean mix with a wide frequency range that neatly separates the instruments, “Graves” is wonderful encapsulation of everything that has worked so well on the album.

Though ‘In Contact’ is divided into four narrative chapters, the plot details might be considered an added bonus for those who want to dig in, while even casual listeners can enjoy the more transparent lyrical and musical themes that the band deliver with great emotional force. Caligula’s Horse offer several all-too-rare-these-days components of a great emotional rock/technical metal album: chiefly, a bevy of honest-to-goodness guitar solos and well-formed songs that ground the musical performances. As such, In Contact is an instantly accessible experience that will continue to delight with repeated listens.

Released on September 15, 2017 on InsideOut Music

Key Tracks: Will’s Song (Let The Colours Runs), Songs for No One, Fill My Heart, Graves