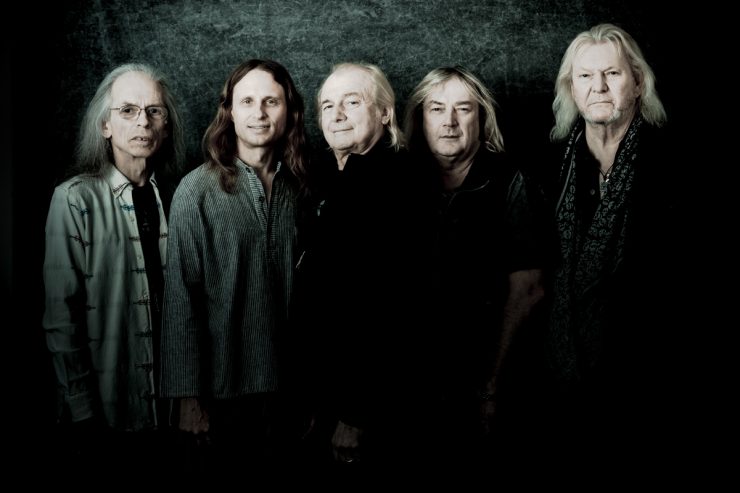 Jon Davison, YES vocalist, talks about the upcoming YES Summer Tour, recording the new album Heaven and Earth all over the world, and how he got the job without an audition.

Check out Jon and YES on tour and on the new album “Heaven and Earth” out this summer.  Jon can also be heard on the new Glass Hammer cd “Ode to Echo“.

Here is an excerpt of the interview.  For the full audio interview check out the video link below or download the podcast on iTunes.

So right now are you preparing for the upcoming YES tour?

We’re actually on tour.  We’re in Canada.   Let’s see, we have about 4 more shows in Canada, we’ve got Atlantic City, NJ, Bethlehem, PA and then on April 7th, we disembark  or actually we’re off on the cruise.   That should be fun, Honduras, Mexico all of that.

The announcement came out just this week about  the new album and the summer tour dates.  What can you tell us about that and the choices to do Fragile and Close to the Edge from beginning to end?  What was the plan for this upcoming summer tour?

We just felt like it was important to now try the Fragile album in its entirety, just because doing the other albums went off so well and that’s another key album that we wanted to touch on.  And we’ll also be doing sort of a mixture of various songs including a couple of new songs as well.

How is the new album coming?

Well we finished recording just in time.  We had to leave.  We finished in the studio, in fact, we were doubling up in the studio meaning that Chris and I were there working on background vocals, Steve was finishing guitars, Geoff was in Wales, Alan was in Seattle and they were both sending tracks still.  Alan had some percussion to do so we were just kind of throwing everything in at the last minute.  And then we only had 2 or 3 days max before we had to start this tour.   So we finished just in time.  The tracks still have to be mixed and Roy Thomas Baker will start that in a couple of days and what he’s gonna do is send us mix examples and we all kind of sign off on them or make comments about changes we feel are needed.  Yeah, that’s the way its gonna have to go.  We just ran out of time and had to get on the road.

You had a say in the writing process and recording this time with the band your first time with them.  Tell me about that.  Was there a lot of pressure?

I thought it might be but it turned out not to be at all.   I got to know them really well and they composing styles and patterns and pace.  And I was really quite comfortable with it especially because we started one on one.  I started in Phoenix with Chris, we solidified a few ideas together, then I went up to Seattle and worked with Alan, and then flew to the UK and went out to the countryside with Steve and that was great.  I was there for about a week.  We got a lot done as well.  Then I went to Wales and worked with Geoff one on one.  It was really very comfortable and very exciting too.

How many tracks are on the album?

8, and there will be a bonus track for the Japanese release.