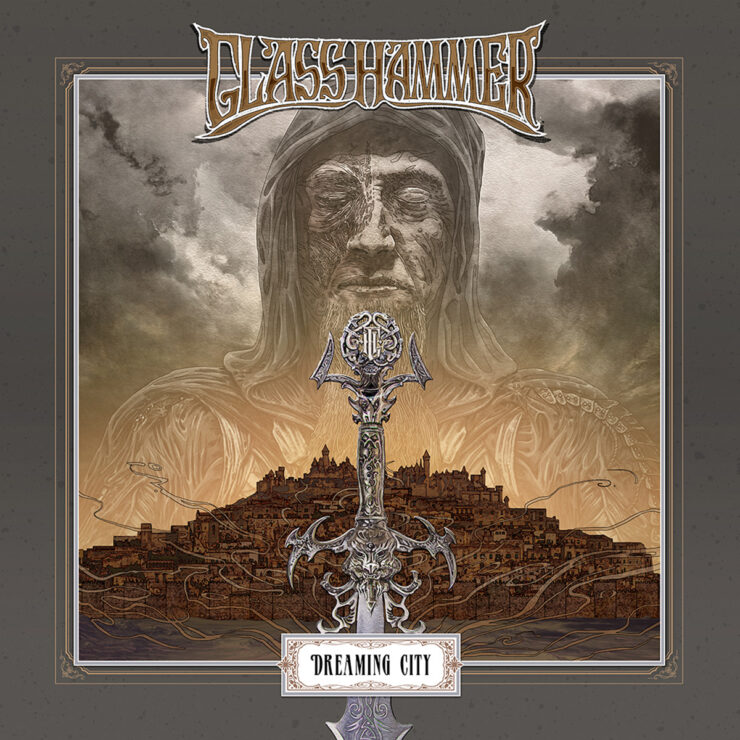 Approaching their 30th year of existence, this new release from Glass Hammer, the band masterminded by Steve Babb and Fred Schendel, sees them return to the world of their 2005 album The Inconsolable Secret, and Steve Babb’s book, The Lay of Lirazel. Those who follow the band will know that Babb and Fred Schendel are the originators and constant members, as well as the main writers. These multi-instrumentalists cast each album like a movie, bringing in the player and vocalists to match their visions, and this one is no exception with some new and some familiar faces appearing.

Pre-publicity for the album titled ‘Dreaming City’ suggests that this is one which may shift your perception of Glass Hammer and, in spite of being a fan of the band for many years, I can see what they are getting at. There is definitely a heavier, though no less melodic, edge to some of the music, but one that is appropriate to the theme. It is a concept album, telling the story of a desperate man and his quest from a doom-ladened city, tackling a series of horrors to attempt to rescue his lover… and he only has 3 days in which to do it! The man is accompanied by Terminus, his trusted sword and weapon, which serves as a talisman to guide his journey.

Opening track “The Dreaming City” captures the dark place where the journey begins, and the riffing, accompanied by vocals from Steve Babb get things off to an energetic start. Reese Boyd contributes some great guitar, and this is followed by a breakdown with Schendel adding some classic prog organ. The raw edge continues into the opening of “Cold Star,” but the mood shifts to a more acoustic tone, with some Gentle Giant style vocals, as the music sets up the narrative of the quest. What I would suggest the most rewarding way to experience this album is from start to finish- song breaks etc are necessary for playability but actually many of the breaks are really just convenient stop off points in the flowing musical work. Vocals here come from Boyd, who is relatively new to the Glass Hammer camp (having played a guitar solo on Chronomonaut) but definitely makes his presence felt here.

“Terminus” is an interesting step introducing some electronica elements to the music, as well as heralding another new contributor, John Beagley, an English vocalist and musician. This track has a Toto/Circa/Billy Sherwood feel to it. The instrumental “The Lurker Beneath” is a lead in to the battle in the next track with the sea creature “Pagarna,” and this track concludes with a musical representation of the defeat of this monster! Its final stroke sends our hero into a dream state, through the track “This Lonely World” – this one has a fantastic mid section with keyboards and bass pedals, conjuring the images represented by the narrative.

Long time Glass Hammer member, Susie Bogdanowicz returns for “October Ballad,” which sets out the plight of our hero’s lover. “The Tower” is another instrumental which pictures the location of the lover, who the hero must rescue- again some interesting electronic elements, along with some standout atmospheric guitars. I’m not going to mention much more about the narrative because… well that would spoil things! However the last 20 minutes of the album, incorporating the tracks “The Key” and “The Watchman on the Wall,” are a brilliant conclusion. Watchman is a fantastic almost 12 minute epic which twists and turns through a variety of musical styles. Credit here goes to long term GT drummer Aaron Raulston, as well as Reese Boyd featuring on guitar and vocals, bringing the album to a close with a tremendous wah-wah guitar solo, which certainly has several nods to the styles of another famous prog band.

I mentioned at the start that Glass Hammer have been an active band for quite some time. As a long term fan, this album has a spark and a new lease of life which I think will make this one of the stand out albums of their career – it’s got all that GH do best, and a whole lot more. If you enjoy sinking your teeth into a concept album with a narrative strain, then get the physical release and use the sleeve notes as your guide to this story. For anyone who has encountered the band previously, but perhaps not lingered, this is an album that is really worth listening to.