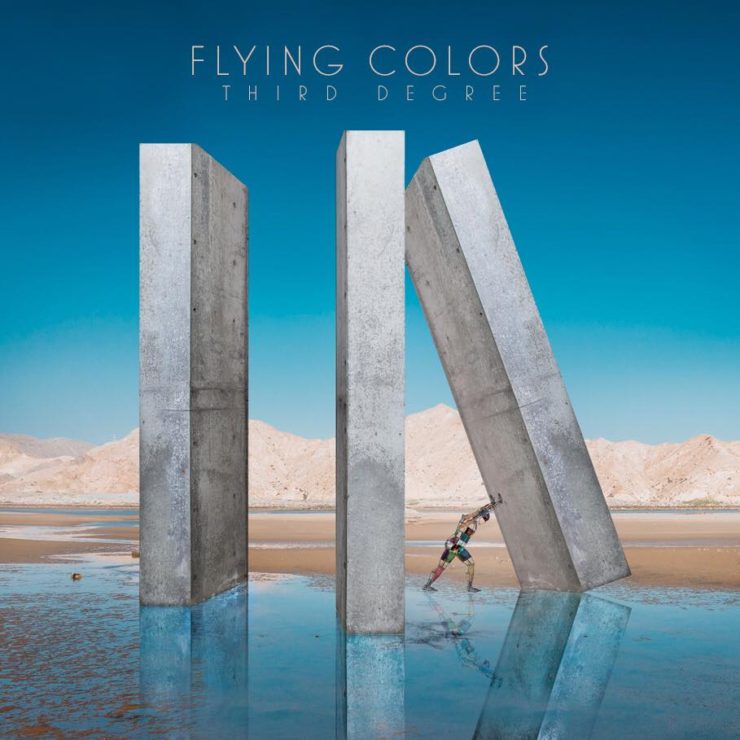 The world of modern day prog rock moves fast. It seems like it was not that long ago since Flying Colors, the prog rock supergroup of Neal Morse, Mike Portnoy, Casey McPherson, Steve Morse, and Dave Larue, released their self-titled debut album in 2012. The follow-up Second Nature came following a fairly quick turnaround of 2 years in 2014. Since that time, the band members have all been fairly busy with their other bands and tour obligations. And now almost 5 years to the day, comes the group’s momentous 3rd album, aptly titled Third Degree.

The band was formed initially with a focus on bringing some of the world’s best musicians to create a more commercial sounding pop-rock album. They succeeded with tracks like “Kayla”, “The Storm” and “Everything Changes”. Meanwhile, with no producer to man the soundboard, the band introduced more of their prog backgrounds on Second Nature with epic tracks like “Open Up Your Eyes” and “Cosmic Symphony”. So which direction would the band go with this latest venture? The result is a combination of the prior albums with a group of songs that might rank this album as their best.

The album begins with a bang as the full band kicks in on the rocker “The Loss Inside”. The track has a few deceptive turns with the verse slowing to a funky rock groove, while the chorus is as bombastic as this band can get. McPherson hits his brilliant falsetto right out of the gate, making his presence known. It is a proper start to this album, but in no way announces what is yet to come. The second track is the album’s first single “More”, a sinister sounding rock track with vocals similar to what you might hear on a Muse album. But mid-way through the track, the band make it clear, this IS a Flying Colors song. Steve and Neal Morse lead the charge with an orchestral arrangement played on their respective guitar and keyboards in a way only these standouts are known to do.

Song 3 and 4 are dramatically different than the two aggressive rockers that precede them. “Cascade” is pure Steve Morse, with a guitar opening played in his unique harmonic style. This track follows in the vein of a song like “Kayla” but with a more elaborate proggy approach. “Guardian” is one of the unexpected tracks in the collection, highlighted by Dave Larue’s outstanding bass playing, which is brilliant and up front through most of the album. The middle breakdown is so counter to the main sections of the song, it is a wonder how they made the different sections work, but they do, in glorious manner. There is also a signature Steve Morse shred moment that is breathtaking. There is not another band that can produce a song like this. With all that said, we haven’t hit the best parts of the album yet.

Where is the prog you ask? Look no further than “Last Train Home”, the centerpiece epic that covers all bases – the grand opening, the soaring chorus, the drum breakdown from Portnoy layered with Steve and Dave soloing, the Neal Morse keyboard solo section…exhausted yet? We didn’t get to the acoustic breakdown and the epic ending. Well, you get the idea.

To keep things unpredictable, the band venture slightly into jazz territory with the Toto/Steely Dan-esque “Geronimo”. It is a wonderful change of pace track with an unexpected rock chorus. This leads into the album’s lone ballad, the beautiful “You Are Not Alone” which McPherson wrote about Hurricane Harvey that hit his town of Austin a few years ago.

The most surprising song to jump out of the speakers on this collection is the 60s-influenced “Love Letter”, a song that is so full of hooks, you can’t escape it for days. Casey, Neal and Mike all take turns singing lead on this track, one that is destined to be one of the band’s classic songs and fan favorites. The Steve Morse solo section is just perfection in every way. Of course, as the 2 other albums did, Third Degree closes with another brilliant prog epic titled “Crawl”. While it has a lot of piano throughout, it has a heavier and darker feel than the rest of the album. It is also emblematic of just the kind of range this band possesses.

Flying Colors’ Third Degree is the result of great songwriting, brilliant musicianship, amazing harmonies, and undeniable melodies. While most of the members are used to leading their own thing, here they each take a step back and let the music lead. Still, within each song you can hear each member’s imprint at appropriate times, making it all sound like Flying Colors. The only shame is that this is a side project and not a band that can record and tour more. Let’s hope they don’t take another 5 years for the album number 4.