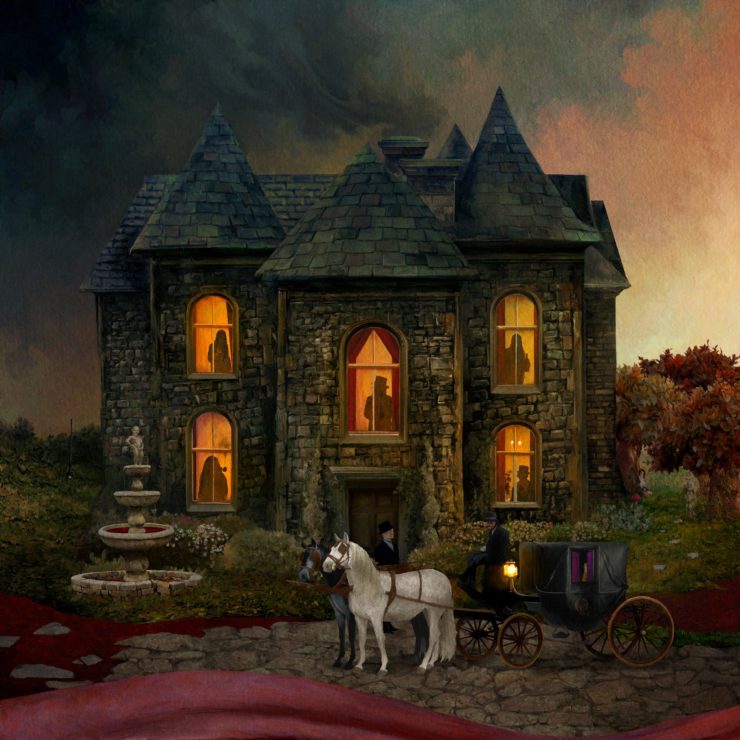 In Cauda Venenum will be released on September 27th

The term “progressive rock” was born when the original prog bands took the concept of rock n’ roll music and added unique twists to it; adding elements from other genres of music or using unconventional instruments, thus “progressing” the style. Nowadays, many modern prog bands are content to sound just like their predecessors. Opeth, however, is not one of those bands – they indeed keep progressing.

The Swedish group started off with albums that would fit in the death metal genre, but they never sounded anything like the other bands. Even in their most fast paced and growly songs, there was usually a clean vocal section with melancholic acoustic guitar to switch things up. They never had an album too similar to the one before, while still maintaining their iconic sound and feel. Opeth’s special sound is still here in their new album, In Cauda Venenum, and we’ll break down what makes it so distinctive. In Cauda Venenum was originally written in Swedish during Mikael Åkerfeldt’s “sabbatical” year. They are releasing both the original version and a localized one in English. For the purposes of this review, we’ll be looking at the English version.

If you’re one of Opeth’s old school fans and were hoping for the return of the death metal vocals, I’m sorry but they’re keeping the trend established since 2011’s Heritage. This doesn’t make the album any less heavy or powerful though, as the lyrical content coupled with the overall tone more than makes up for any growl.

The beginning of the album is a good indication of its general tone. “Garden of Earthly Delights” is an intro filled with ominous sounds that segues directly into ”Dignity”; a brilliant way to start the album – great riffs, instrumentation and an incredible guitar solo even before the vocals kick in. This is one of those songs that fluctuates between the heavier and lighter sections that compliment each other masterfully. You can already hear examples of the new things that Opeth is trying out here – Mikael is singing a bit above his usual range. It adds a sense of desperation that goes hand in hand with the lyrics and makes the track feel even more alive.

Then onto “Heart in Hand”, the first single. This one sounds familiar with a classic Opeth guitar riff but still refreshing. Verses use a very catchy melody that coupled with the drum fills, it’s impossible not to headbang along. Fredrik’s guitar solo is also played on top of this section and it’s just insane. This was a perfect choice for a single.

“Next of Kin” is one of the darker and heavier points of In Cauda Venenum. After lots of diminished chords and frightening choirs, we have a middle section with only Mikael’s beautiful acoustic guitar and vocals. I’m sure this track was very carefully built, there’s not one single note that seems out of place and the productions brings it to life even more.

The album then moves on to “Lovelorn Crime”, the ballad of the album. Beautifully orchestrated, this song starts starts with gentle piano chords that build into the rest of the song. As the drums, bass and the eventual amazing guitar solo come in, the track resembles moments from great albums like Damnation or Pale Communion, but with a touch of In Cauda Venenum in its tone.

A calm before the storm – as “Charlatan” begins in impressive fashion, with a fast paced and very proggy intro. With a wider focus on synths, heavier riffs and more shredding sections, this track brings something refreshing to the table.
By this point in the record, I wouldn’t say there’s a weak moment or song. But from this point onwards is when we reach the cream of the crop. “Universal Truth” is an absolute masterpiece – heavy, fast, melodic, emotional – it has all the ingredients that make Opeth such an interesting band. The chorus in particular being so good it gives goosebumps. It’s one of those tracks that you have to listen to truly *get it*.

“What if Dave Brubeck’s evil twin wrote a song?” must be what Mikael was asking himself when he wrote “The Garroter”. The results are really interesting and a dark jazz ballad is something I never expected from Opeth, but we know they like to innovate.

What was said about “Universal Truth” can also be applied to “Continuum”, my favorite track in the album. It starts easy, evolves and gets progressively heavier until it dials back to the beautiful verse melody again. The middle section that has Fredrik’s guitar solo is incredible, it’s a full showcase of the entire band’s synergy in musicianship and songwriting. The lyrics are moving and as it ends, perfectly flowing into the last song in the album.

“All Things Will Pass” had the challenging position of maintaining the bar set from the rest of the album, which was consistently high. The opening riff was supported by Axenroth’s excellent drumming to really bring it to life. As an album closer, it’s done an amazing job of keeping true to the overall tone of the rest of the album while bringing something of its own. The song’s structure, bridges and especially the ending section show how Opeth’s concept have matured and are reaching new heights in execution.

Opeth has been around for almost three decades and they have managed to keep their catalogue interesting and varied. Mikael’s main philosophy in doing so is to write music that please himself first and if the fans like it as well, that’s a plus. However, the essence of the band is present in every one of their albums, and In Cauda Venenum is no exception.
As an Opeth fan of all eras, this record pleases me in every way and I’m very happy to see the direction they are taking it. It’s a phenomenal achievement to be able to make new material in your 13th studio album that still sounds refreshing, interesting, well produced and all the other positive adjectives I spread across this review. All in all – Opeth has done it again, In Cauda Venenum is the kind of album you need to have in your collection.

Released on September 27th, 2019 on Moderbolaget and Nuclear Blast.