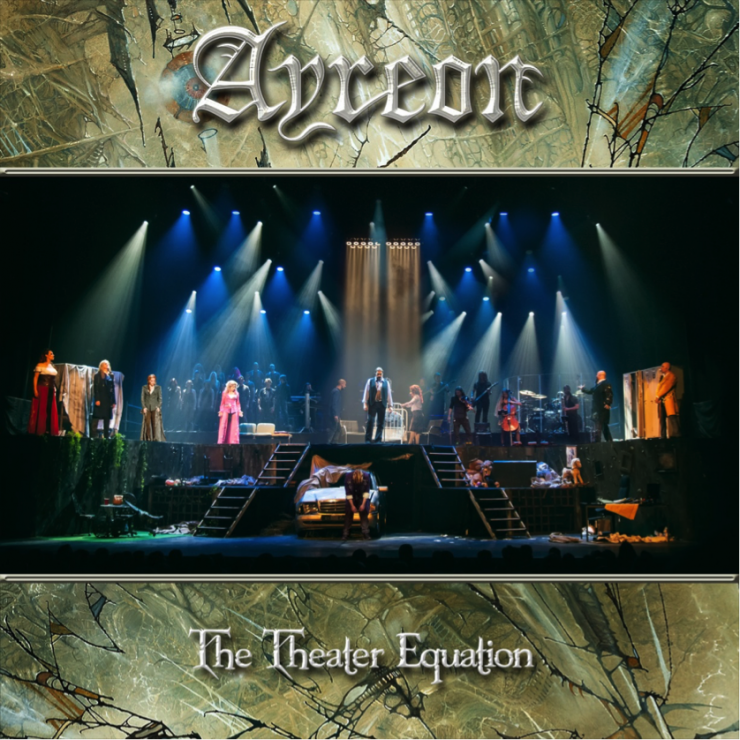 Review of the Ayreon Live set – The Theater Equation

If you think you’re fully familiar with the term “Rock Opera”, don’t be too sure – at least not until you’ve settled in with several large glasses of your favorite beverage and spent a good few hours listening to Ayreon’s latest release “The Theater Equation” which comes as both an audio version and DVD for the full visual spectacle.

I consider myself a hard-core Progger, and am intimidated by very little that could be described as “excessive” in the genre of music that I love. But the scope and breadth of this release surprised even me. “The Theater Equation” is a double-album recording of Ayreon’s 2004 album “The Human Equation”, that was performed live in Rotterdam over four nights in late 2015. What has been released is a recording of the final show of that season.

We all know that Arjen Lucassen is the undisputed king of Prog Opera, and that his ambition in this realm is boundless, but the word “elaborate” does not quite describe this production. Featuring Dream Theater’s James Labrie in the lead role, together with Ayreon stalwarts Ed Warby, Jeroen Goossens, Ben Mathot, Joost van den Boek, Anneke Van Giersbergen, several other vocalists and instrumentalists, a full choir and what seems like a cast of thousands (actually it is dozens), the mind boggles at the amount of work that must have gone into creating this full-scale production of Ayreon’s 2004 album.

With twenty-eight separate songs, it would be redundant to list the compositions here and critique them all separately. The studio version is in any case the stuff of legend. Suffice it to say that this production of the album is given no short shrift whatsoever. It is arranged and performed with full gusto, it is precise, it is heavy going, it is exacting and it is BIG. From the Baroque choral musings in Day Four (Mystery) to the fiddle jig in Day Sixteen (Loser), from the heavy metallic crunch of Day Fourteen (Pride) to the sweeping vocal/keyboard counterpoints of Day Twenty (Confrontation), the flute in several songs to the Zeppelin-esque acoustic guitar and vocal acrobatics in Day Five (Voices), no detail is ignored. Just about every instrument, mood, method, technique and sub-genre of Prog is covered by the compositions and arrangements, with Lucassen’s distinctive operatic undertones consistently underpinning it all, in this rendition.

Just for the record, “Day Six: Childhood)” and “Day Seventeen: Accident” are for me the standout tracks. The former melds a simple keyboard structure with Kate Bush vocals to build into a heart-rending and authentic analysis of childhood effects on one’s psychology. With the music dominating the story, there are no dramatics here – just a fabulous Prog song. The latter is the perfect mixture of opera and Prog and bears the torch for the production. On the other hand, “Day sixteen: Loser” is an example of the type of track that arguably over-exploits the theatrical aspects of Rock Opera, making it a difficult listen, when taken out of the context of the story-line.

The core narrative of “The Theater Equation” is the story of a psychological change undergone by a man placed into a twenty-day coma (caused after an accident described in “Day Seventeen: Accident”) during which his wife and best friend hold vigil at his bedside. His mind and emotions toy with him and lead him into fear, suspicion, rage, agony and suspicion. Each day or emotion has a song dedicated to it. Thus the story and is well and truly told, sung and played to the extreme. This is truly a live rock opera in the real sense.

All in all, this production, with it’s huge gravitas and painstaking performance, is a genuine and authentic dramatic realization of the original concept of “The Human Equation”, done on a very large scale.

Don’t expect instant gratification. Day Three (Pain) and Day Four (Mystery) are two of the very few songs on the album that are instantly accessible (perhaps because they could stand alone outside the story line), but overall accessibility is indeed eventually achieved by the whole production as a result of the application of a few central threads, including a clever guitar line that comprises a recurring theme throughout the production.

To stage this production must have been a massive undertaking, and on listening, I find myself wishing I had been there to witness the event. Parts of the performance are spine-chillingly emotive, while other parts just rock. At all times, however, the story-line is attended to with painstaking and faithful detail.

The operatic aspects may be a bit heavily-dosed for some. But one is left understanding Lucassen’s need to throw the proverbial kitchen sink at bringing his creation to llife. Is it excellent? Of course. Is it ambitious? Definitely. Is it over the top? Undoubtedly. But it IS an Ayreon Rock Opera after all, and one would expect nothing less from Lucassen and his cohorts. You can almost smell the grease-paint it is so authentic.

If you are an Ayreonaut, this will be easy listening. If not, take your time – the operatic and dramatic flavor takes some acquiring.

Arjen Lucassen does not do things by half measures – that much is clear. The Theater Equation is heavy listening (not heavy as in crunching guitar – heavy as in demanding to listen to), but it is an opera, after all, and it makes no apologies. Dilettantes should avoid this release, which is really for Prog aficionados. But if you are a hard-core, fearless Prog fan that is not deterred by a challenging listen, nor by the operatic or the highly theatrical, this production is worth investing in.