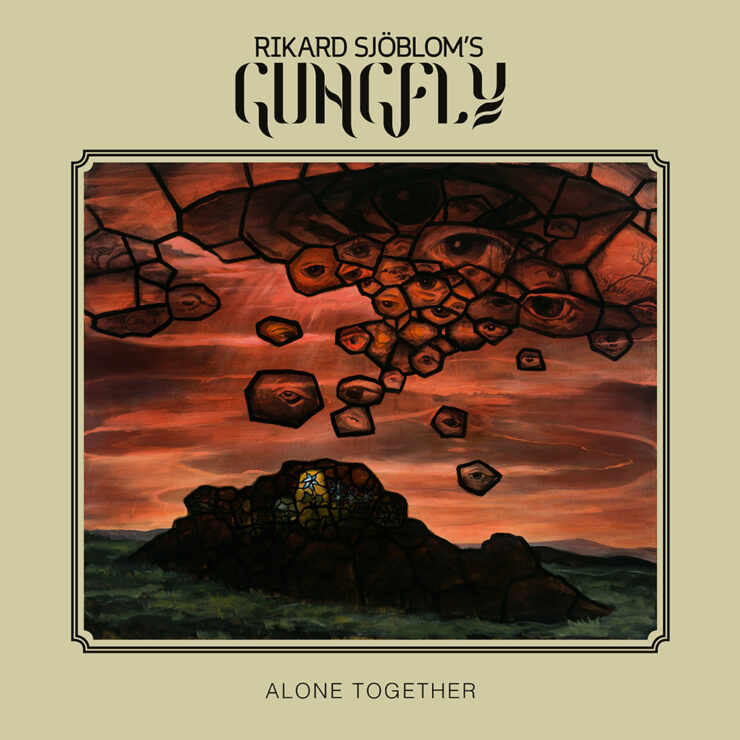 Rikard Sjöblom is currently one of prog’s busiest musicians. The man who was behind the legendary Swedish group Beardfish, now’s the guitar player for Big Big Train and has been releasing solo albums regularly under the Gungfly banner. His new record Alone Together comes out September 4th 2020 and goes deep into the dynamic of relationships. Back in his band are the brothers Petter and Rasmus Diamant, on bass and drums respectively.

The album starts with an epic 13min song “Traveler”. This track wastes no time in introducing Rikard’s trademark compositional elements – the quirky sounds and reoccurring motifs that will sometimes reappear over the album. Unlike his previous album Friendship, “Traveler” favors a more raw, rock sound with lesser focus on layers of instrumentations. Although there are still plenty of brilliant instrumental moments, the emphasis seems to be on delivering more straightforward hard rock beats. This first song is a good indication of the vibe the album is going with and is definitely on par with the quality of his Gungfly’s usual work – the guitar solo in the middle is one of the highlights of Alone Together.

“Happy Somewhere in Between” brings the humorous side of Rikard’s writing along with melodies that are totally out of the ordinary. This song has a very cool feel with high energy and is one of the shorter songs in the album, still with that ‘straight to the point’ feeling. My favorite section is the ending with the organ solo – brilliant. It’s followed by “Clean as a Whistle”, which starts with acoustic guitars only and introduces other instruments along the way. Although it starts a bit ballad-like, it picks up halfway through and we have the cool hard rock fills meet with some beautiful proggy melodies.

Moving on to the title track “Alone Together”, which immediately evokes 70s prog vibes in its intro with very prominent organs and an awesome bass riff. Then, straight to the verse where there’s even a bit of screaming by Rikard (which he hasn’t done in a while). The track goes all over the place in its tone but it is clear how the lyric and musical sides communicate with each other. This has always been one of the strengths in every Gungfly album and it is ever present here too.

“From Afar”, a short song with vocals, acoustic guitars and piano only, brings in a country music and is a very refreshing track with interesting instrumentation. A great breather song in between the title track and the epic final track.

To finish the album, “On the Shoulder of Giants” is the track to listen to if you have to only choose one. The rock n’ roll elements are all there while bringing some amazing riffs and motifs. The vocals remain the leading instrument throughout the track, including the middle section when they are accompanied by the piano. This part of the song is definitely my favorite of the album and shows incredible range by Rikard as well as his capability to explore a lot of territory in only one song. The finale is also perfect – bringing the main theme back into leading guitars. The trio is super tight and finishes off the record in a high note.

Alone Together is another successful addition to Rikard’s excellent catalogue. Gungfly is a project which leaves much room to explore and he takes good advantage of that. The different influences are clear between each record and he recruited other very talented musicians to join him on. In a year with an already impressive list of new progressive rock releases, Alone Together should not be slept on, as it’s sure to please both existing and new fans.

Released on Sept. 4th, 2020 on InsideOutMusic
Key Tracks: “On the Shoulder of Giants”; “Traveler”.

Tracklisting
1.Traveler
2.Happy Somewhere In Between
3.Clean as a Whistle
4.Alone Together
5.From Afar
6.On The Shoulders Of Giants
7.Grove Thoughts (Bonus Track)
8.Shoulder Variations (Bonus Track)