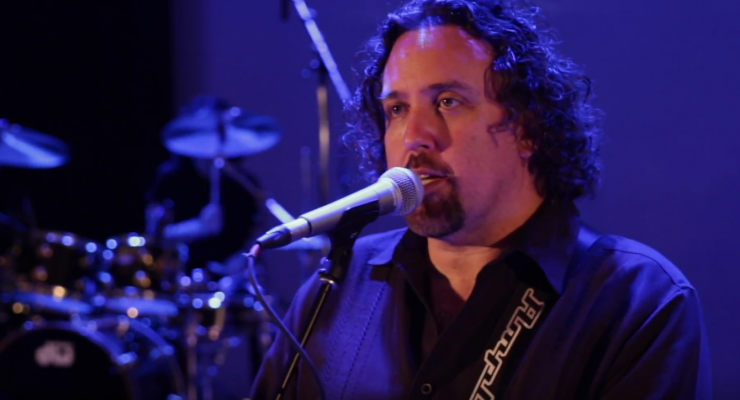 Progressive rock singer/songwriter/producer and co-founder of the progressive rock group Sound of Contact, Dave Kerzner, is releasing the second single from his sophomore album ‘Static’, which is out now.  The track “Chain Reaction” is an uptempo rocker and first full video to be released from the new album which is the follow up to his highly acclaimed debut album “New World.” Joining him are special guests Steve Hackett (Genesis), Durga McBroom (Pink Floyd), Nick D’Virgilio (Big Big Train), Colin Edwin (Porcupine Tree) and more in addition to his core group consisting of guitarists Fernando Perdomo and Randy McStine, fellow SOC band mate Matt Dorsey and drummer Derek Cintron.

Kerzner had this to say about the song. “Chain Reaction is about how conflict can build between people starting with just a few provoking words and escalating into a war”

You can see the exclusive premiere of “Chain Reaction” here:

Dave Kerzner is nominated in multiple categories in the 2017 Prog Report Fan Poll.

“Static” is a “progressive rock opera” about the clutter and chaos in modern everyday life. It boldly navigates through subjects ranging from noise in our heads of ego, jealousy, technological distractions, substance abuse and narcissism to profiling the hypocritical and corrupt characters in politics, media and society today.

With a bit of dark humor, sarcasm and a retro-future dystopian view, with rich imaginative artwork created by Ed Unitsky, “Static” merges elements of a twisted Broadway musical with familiar vintage rock flavors like that of King Crimson’s “Red” or Genesis’ “The Lamb Lies Down on Broadway.” Other strong detectible influences include The Beatles, Queen, Radiohead and Kerzner’s late band mate from “Thud,” Kevin Gilbert.

“I aim to bring forward some of my favorite qualities of classic rock and prog albums and blend it with something new that feels right today. “ Says Kerzner “I like creating memorable songs that tell a story in a melodic musical way. This is what I love about the timeless rock albums in my collection and my goal is to contribute to other people’s collections in the same way.”

About working with Steve Hackett: “Having Steve Hackett guest on guitar again is a dream for me because I grew up listening to Genesis and wanting to play with a guitarist as innovative and melodic as Steve. I also love these sort of cross-generation collaborations where we meet in the middle of modern and retro,” says Kerzner.

Dave Kerzner and his band embarked on a US tour starting with headlining the ProgStock festival on October 14th in New Jersey where they performed all of the album “Static” live and then headed over to Chicago for the Progtoberfest at Reggie’s on October 20th. From there the Dave Kerzner Band and fellow American proggers District 97 continue on their “Static-Vaults Tour” playing in other cities around the East Coast. In February 2018, the Dave Kerzner Band will be performing on Yes’s Cruise To The Edge for the third time with plans to do a short tour of Europe in the Spring.