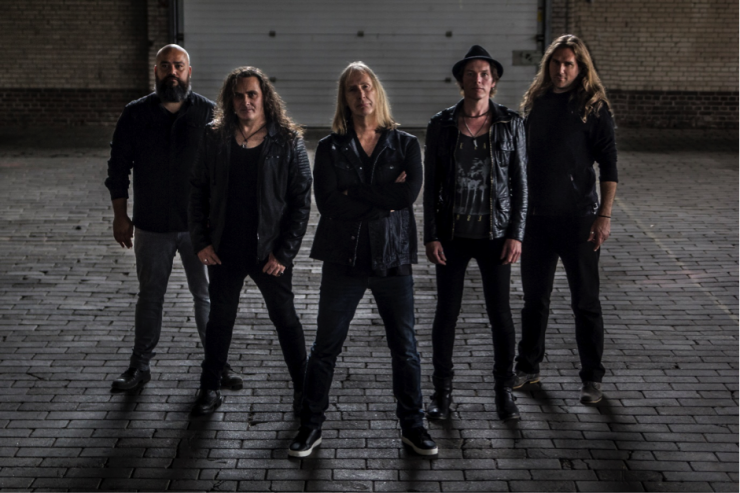 KAYAK will release their seventeenth studio album entitled “Seventeen” on the January 12th, 2018.

Legendary Dutch progressive rock band KAYAK will release their seventeenth studio album entitled “Seventeen” on the January 12th, 2018. Today they have launched the track ‘Feathers & Tar’, the first single from the album, listen to it here:

Ton Scherpenzeel comments: “While being a straight-up, very rousing track musically, ‘Feathers and Tar’ is a hard one to explain lyrically. The lyrics are basically part of a larger story that is not quite finished yet, but can stand on its own as well, metaphorically. I put it into a kind of ‘Game of Thrones’ like context, to point out the seemingly inevitable cycle of wars, because of greed and general human misconduct – history repeating as it were. Not a very happy tale yet a really powerful song!”

They also recently released a teaser featuring snippets of three tracks, and you can watch that here:

Founding member Ton Scherpenzeel has this to say about the upcoming new record:
“Who would have thought that the quirky Dutch prog band that began its journey in 1973 (the year “See See The Sun” came out) would still have a future some 45 years later. Yes, we have had our share of ups and downs. Often it seemed the band would either break up for good or fade into oblivion. But we didn’t. So here we are, a new line up, but as dedicated to the music as we were in the beginning. If there is a secret to KAYAK’s longevity, it must be that. Writing this, I realize that the album title does not only mark the number of studio albumsKAYAK has made up until now. It also represents that exciting feeling of being 17 all overagain, embarking on a musical journey, full of expectations. And just like in 1973, I don’t knowwhere it will lead us, but we’re on our way. Here’s to new horizons.”

An exclusive, strictly limited blue Gatefold 2LP+CD (200 copies only) as well as the 2CD Digipak are available at the band’s own official store:
https://kayak.merchandise-entertainment.com

The band will play some headline dates in the Netherlands in January, and support will come from Rikard Sjöblom’s Gungfly:

Furthermore, the band’s creative core – Ton Scherpenzeel, Marcel Singor, and Bart Schwertmann – are confirmed to appear at several in-stores in the Netherlands, too:

KAYAK was founded in 1972 by keyboardist/composer Ton Scherpenzeel and drummer/composer Pim Koopman, along with lead singer Max Werner, guitarist Johan Slager and bass player Cees van Leeuwen. Often compared to contemporaries like Yes and Focus, the band quickly developed their own style of symphonic rock that was rather concentrating on songs than elaborate solos and long instrumental passages while KAYAK never shied away from including epic, longer tracks and captivating, dramatic arrangements. Throughout the years, KAYAK has seen many line-up changes with Ton Scherpenzeel now being the only original member and leader of the band.

KAYAK achieved tremendous success from the late 70’s onwards, cracking the US top 50 charts with the single ‘Want You To Be Mine’ in 1978, holding number #1 in the Dutch charts for several weeks with the Platin awarded “Phantom Of The Night” album released in 1979 with its single ‘Ruthless Queen’ reaching #5 on the Dutch single charts. This first era of KAYAK ended after eight albums in 1981. All members went their own way, Ton Scherpenzeel for instance played and recorded with groups like Earth & Fire and Camel, whereas former singer/drummer Max Werner scored a number #2 hit in Germany with ‘Rain In May’ from his second solo record “Seasons” already in 1981.

But the story of KAYAK was not over.

Fast forward to 1999: after an 18 year absence, Ton Scherpenzeel and Pim Koopman restarted KAYAK, with Max Werner again taking over lead vocals. This second era was marked by an explosive, new creativity making the band’s output exceed the early days. In 2009, disaster struck when Koopman died of heart failure in the middle of the “Letters from Utopia” tour. In 2011, the band had overcome this big loss and returned to the stage and with a new album. A couple of years later KAYAK completed their rock opera trilogy “Merlin”, “Nostradamus” and “Cleopatra” but when lead singers Cindy Oudshoorn and Edward Reekers left the band shortly after, Scherpenzeel realized he had to completely renew the line up in order to maintain his creativity as well as keep the band going.

Now, with singer Bart Schwertmann and guitarist Marcel Singor joining Ton Scherpenzeel as the band’s creative core and additional members Kristoffer Gildenlöw (bass / ex Pain Of Salvation) and Collin Leijenaar (drums / Affector, Neal Morse, Dave Bainbridge), a reborn KAYAK once again proves that the band’s name – though chosen randomly back in 1972 – is as appropriate as ever. Just when everyone expects the boat to sink, it miraculously resurfaces and sails on.