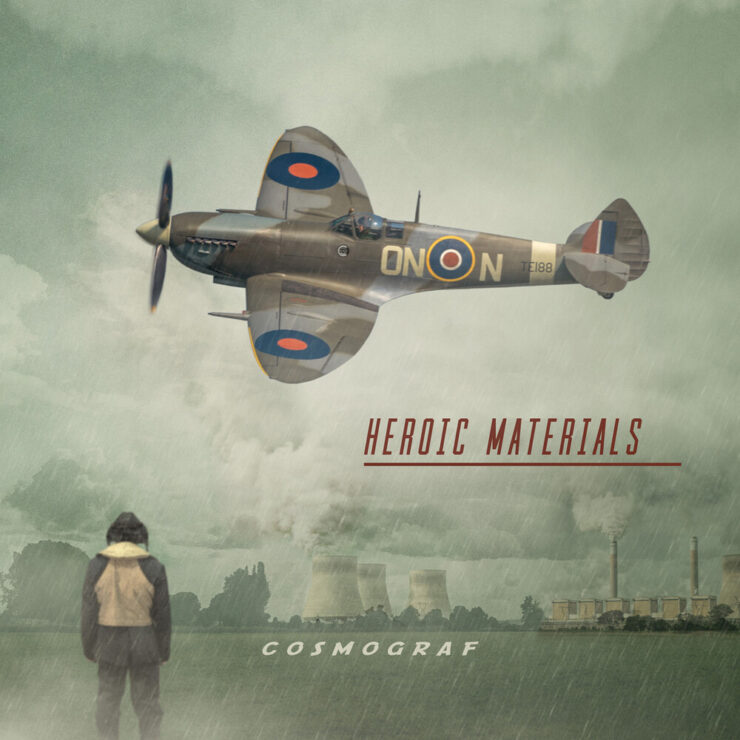 Review of the new album from Cosmograf – Heroic Materials

As the fragile, almost childlike vocal and piano opens this album, you could be fooled into thinking that Robin Armstrong (for he is Cosmograf) has opted for a simpler, more stripped back approach for this, his ninth album under this name – and, if you did you’d be wrong!

Heroic Materials is a thematic concept album, whose underlying themes bring a unity to the album without weighing it down with a heavy narrative. The songs are written from the perspective of 99 year old former World War II Spitfire pilot, Billy May, and they are his reflections on an age gone by which he laments and misses. It also blends in the underlying realisation that in order to remain, our lives on this planet, changes need to be made.

After the scene setting opener “I Recall,” the album jumps straight into the epic 13 minute title track. Almost everything you hear on this album comes from Robin’s hands and voice, except for the drums, played by Cosmograf’s regular sticks-man, Kyle Fenton and, on this track, some tasteful piano is added by former BBT keyboardist Danny Manners. Dealing with May’s ambitions and activities as a pilot, the song tells his story through the lyrics and music, with Armstrong playing some beautifully lyrical guitar, soloing with a superb Gilmour-like tone and touch.

Musically the album is anchored by Robin’s voice, as Billy, and his underlying piano playing. If you’ve never heard Cosmograf before, while a comparison is always imperfect, this album has some Floyd-like similarities, both musically and in its use of sound effects and dialogue snippets, combined with a narrative approach that bands like Big Big Train use to great effect. The touching “Mary,” a song directed to May’s first love who sadly passed away, has overtones of Roger Waters in its styling, while the subsequent vocal sound on “If Things Don’t Change” brings to mind Steven Wilson.

“If Things Don’t Change”, coming 2/3 of the way through, is a gear shift in the album, as May’s reflections conclude that while many of those who he knows and loves are now gone, the fossil fuel powered world he knew and loved, with aeroplanes and British Made sports cars, also needs to be left behind for mankind to survive. This track has many great musical moments – I love how a majestic church organ peaks through the arrangement at various points, and there is yet more brilliant guitar playing. I can very much see this track being in my Best of 2022 list!

The musical dynamics of the album are also very clever, combining shorter, almost interlude-like tracks between the longer more thematic pieces. Melodic refrains appear throughout the album, providing the musical glue within it, which all lead to the powerful closing combination of “Regretful Refrain” and “A Better World” – the final 20 minute run of tracks is really exceptional! I’d also give further kudos to this release because, at 45 minutes in length, it is a comfortable start to finish listen, without slipping into the indulgence that the longer CD format can lead to – increasingly I find many of my favourite albums in recent years are ones that would fit in to one side of a C90 (Google it if you’ve no idea what I mean!)

I’ve been a fan of Cosmograf for many years but I have to say that with repeated listening, this album is, to me, Robin Armstrong’s stand out work to date. The musical, lyrical and conceptual elements are cleverly combined into an album that draws you into its story and takes you on a real journey. Most of all, you’ll experience the emotions of joy and fulfilment, plus loss and regret that the album’s character feels, but be reminded of the bigger issues and challenges we face in this modern world.

Post Script: Before I even got the chance to write album reviews, I was an avid review reader, searching for something that piqued my interest and curiosity enough to make me want to explore. While I hope for someone this review does that, I’d encourage anyone who thinks this album might interest them to visit https://www.gravitydream.co.uk/product-category/cosmograf/ and support the artist by picking up a copy of this great album.