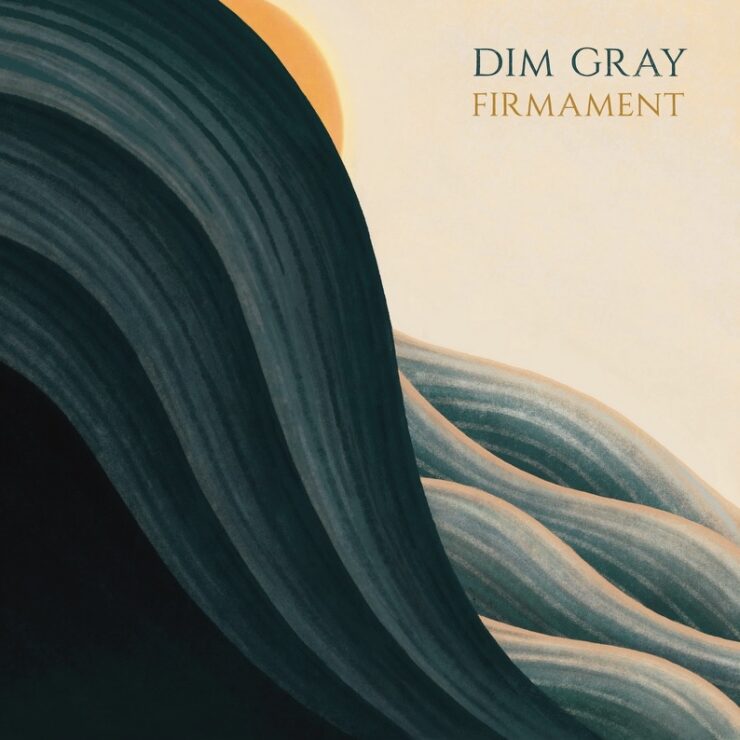 I’m sure many of the people who read this website will often have had moments where they are listening to the sort of music we like and end up asking themselves – how come more people don’t know about this band? Well … I’m going to cut to the chase: Dim Gray is one of those. It’s music that is melodic, has inventive sonic qualities and great vocals – and each of those elements make Firmament an album you’re going to be recommending to people, or buying 4 or 5 copies so you can give it away to friends. At least… that’s my reaction! A bold claim to begin a review with – but let me explain more.

Dim Gray is made up of Oskar Holldorff (vocals, keyboards), Håkon Høiberg (guitars, vocals) and Tom Ian Klungland (drums, vocals), but each musician makes multiple other contributions to the music on the album. The band come from an intriguing range of musical backgrounds (from black metal, 1960s guitar instrumental, some modern prog, electronic and movie music – listen carefully and you hear all of those elements to a degree in this album). They self released their first album, but this one has been picked up as the first release by English Electric Recordings, the label connected to Big Big Train.

Diving into Firmament and you immediately get drawn into its soundscape – it’s definitely an album to listen to on a great sound system or headphones. Very shortly into Mare you get to hear the very distinctive and appealing voice of Oskar Holldorff, which is one of the consistent factors as the songs shift between styles. When he hits the highest parts of his register, the sound is truly majestic and on many songs, this being one such, his voice lifts an already epic chorus to another place.

Another great thing about this album is the variety of sounds and atmospheres throughout it. Ashes, which comes next, has an introduction and verse which sound quite unusual, but perfectly fit the song. As a track, it shifts and moves as the narrative progresses, but all underpinned by a melodic song. In places, and also in the next track Undertow, I was reminded of Trevor Horn’s 1980s ZTT productions where no sound is off limits if it fits the picture. This one also features some epic Jeff Buckley-like vocals, Oscar again scaling the heights of his vocal range.

Avalon | The Tide and Abalus | In Time are both songs with anthemic choruses and incredible production, while Long Ago and My Barren Road are more traditional type songs, each of which has an element of something different when Håkon’s metallic-sounding guitar chimes in. Other stand out tracks for me are the cinematic Iron Henry, the incredible vocal performance of the title track, Firmament, and the tour de force that is the closing track Meridian – the final dynamics of this song are incredibly powerful.

Many times when reviewing albums, it can be easy to say “its sounds like …” and point towards another similar band. In the case of Dim Gray, Firmament captures truly something that is their own sound. They manage to avoid predictable song structures and sonics, yet have come up with an album full of memorable hooks, and one I have found I keep coming back to, to explore further.

I sincerely hope that this album is a springboard for Dim Gray to bigger things, and if you want to get on that train early, grab a copy of the album (and one to give to a friend) because I’ve no doubt there is more great music to come.