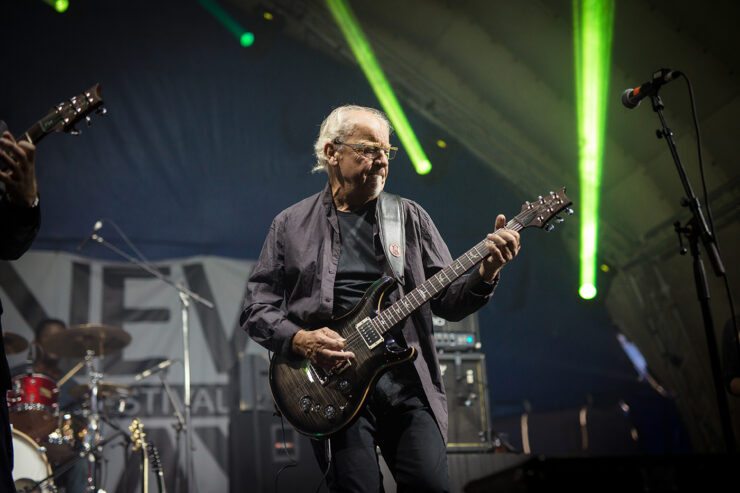 Review of the Martin Barre concert on Jan 16th, 2022 in Boca Raton, FL

Jethro Tull has always had a bit of a split personality. From the get-go, Tull embraced both the light and the dark, balancing quieter acoustic pieces against the heavier progressive, metal, and blues rockers that earned the band its stripes on classic-rock radio.

Take Tull’s best-selling 1971 breakout album, Aqualung, for a start. The record’s decibel-shattering title track and amped-up anthems like “Locomotive Breath” and “My God” received all the FM airplay. But the 7-million-selling album also had a rich acoustic side, with nearly half of the album taken up with Elizabethan-folk tracks, such as “Mother Goose” and “Wond’ring Aloud” that featured tricky folk-guitar figures and intimate vocals.

Both sides of Tull were on full display during a South Florida stop of ex-guitarist Martin Barre’s new U.S. tour with his own band, including a live performance of Aqualung in its entirety. Nearly a decade after parting ways with Ian Anderson – Tull’s founder, singer-songwriter and front man – Barre is staking his own claim to the band’s rich legacy on his new tour.

And why shouldn’t he?

As Anderson’s trusty sidekick for 43 years, Barre played on every Tull album but the band’s debut, This Was, and the new Anderson-penned record, The Zealot Gene – the first to carry the Jethro Tull moniker in nearly two decades. His distinctive fretwork helped defined Tull’s classic sound, with Rolling Stone ranking his iconic guitar solo on “Aqualung” among the 25th best in rock music history. And he shares co-writing credits on several Tull songs, including 1975’s well-known “Minstrel in the Gallery” and 1999’s less well-known “Hot Mango Flush.”

In two hour-long sets January 16 at the Funky Biscuit in Boca Raton, Florida, Barre led his band — Dan Crisp on backing guitar and vocals, bassist Alan Thomson and drummer Darby Todd — through 21 classic Tull tracks, plus three of his own solo pieces. From the get-go, the band delivered rock-solid performances that managed to have the ring of familiarity yet still sound fresh and new.

Barre kicked off the first set by leading the band through a blistering retread of “Hunting Girl” – the BDSM-themed prog-metal rocker from 1977’s Songs From the Wood. From there, the band covered a dozen more tracks from the first decade of Tull, dating back to its 1968 debut, This Was. But this was no nostalgia trip. Virtually every song was given a new spin – including some barely recognizable arrangements. Highlights included:

• Scorching heavy-metal retreads of the jazzy blues-rockers “Fat Man,” “A New Day Yesterday” and “For a Thousand Mothers,” from 1969’s Stand Up — Barre’s debut with Tull.
• A vastly reworked version of the title track from 1978’s Heavy Horses album delivered guitar-trio style — with Barre, Crisp and Thomson supplanting the piano-flute-acoustic-guitar motifs of the original song and Todd bringing the thunder sticks during the chorus.
• Three Barre solo tracks — “Back to Steel,” from his 2015 album of the same name, “Lone Wolf” from 2018’s Roads Less Traveled and the rarity “After You, After Me” – all of which fit neatly alongside the more well-known songs from the Tull catalogue.

After taking a short break, Barre and company returned to the stage for the second set and the centerpiece of the show: Aqualung performed live, in sequence, with a boatload or surprises and new arrangements. The band opened the set with an amped-up mashup of “Nothing is Easy” and “Song for Jeffrey” that led straight into the six-note opening theme of “Aqualung,” drawing the first of seven standing ovations. Crisp seemed to channel Anderson’s wild-eyed stage persona throughout, singing through his teeth and hopping around the stage like a man possessed. Next up: “Cross-Eyed Mary,” with Thomson delivering solo lines on his five-string bass in place of Anderson’s original flute melodies with surprisingly satisfying – if surprising – results.

Then, Barre, Crisp and Thomson presented an extended acoustic set showcasing “Cheap Day Return,” “Mother Goose,” Wond’ring Aloud,” “Slipstream” and “Up to Me.” Pulling off an unplugged set in the middle of rock show isn’t easy, especially in a raucous bar. But the trio managed to make the acoustic interlude an emotional highlight of the show, with Crisp playing descant recorder in places, standing in for Anderson’s flute lines.

The band closed out the show with the heavier second half of Aqualung – with “My God,” “Hymn 43,” “Wind Up” and the album closer, “Locomotive Breath.” In every case, the band took dramatic liberties with the originals, bringing novel approaches and arrangements that managed to sound both familiar and entirely new. For instance:

• Barre launched into “My God” with an electric guitar blast that replaced Anderson’s original acoustic guitar intro and spliced an entirely new instrumental passage into the middle section that had initially featured a lengthy flute solo.
• “Wind Up” and “Hymn 43” were transformed into heavy-metal rave-ups that had some in the crowd dancing and singing along on the choruses.
• For “Locomotive Breath,” Thomson replicated the track’s haunting opening piano lines on his bass, playing the instrument like a lead guitar.

The ended the show with a bang, performing “Teacher,” from 1970’s Benefit album, as an encore, bringing the crowd to its feet one final time for a sustained standing ovation.

From start to finish, the show made clear that, at 75, Barre shows no signs of slowing down. He is not simply reprising the music of long-passed glory days. With every tour, he seems to have more energy and an endless supply of inventive ideas that give even the oldest tracks in the Tull canon a fresh new spin. At the same time, Barre’s band – playing together now for nearly seven years — has also grown tighter and more confident on stage. Crisp shares the center spotlight with Barre in ways Anderson never did. And Thomson and Todd move in lockstep, creating a ferocious rhythm section and foundation.

More than five decades after joining Tull, Barre has clearly found a new way forward that may be rooted in the past, but has more in common with that old train that won’t stop going forward…no way to slow down. Barre’s tour continues throughout the U.S. and Canada until June, before making its way back to the U.K. for a series of shows there.