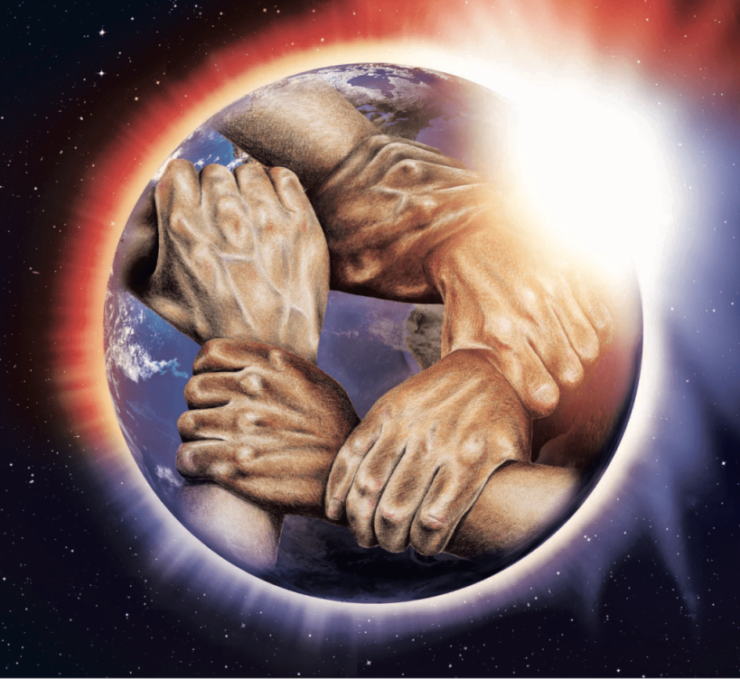 Review of the Big Big Train album ‘Welcome To The Planet’

For their large and growing fan base, the imminent arrival of a new album, particularly one that wasn’t actually expected is something joyfully anticipated but… and let’s say it… our hearts are broken because of the unexpected and tragic passing of David Longdon. Web and print media has seen a torrent of grief, expressed in many ways, telling many stories of this amazing man who was taken from us all too soon. Much has been said, and no doubt will be said… but I feel the best tribute I can give is to write about this album, titled Welcome To The Planet, which is the last one David was involved with, as the vibrant and vital piece of work that it is, rather than dwell on it as his epitaph.

And indeed, as an album, it is an absolute celebration of life! The story is simple. The Grand Tour marked the end of an era for BBT, but the band bounced back, complete with new members with the fantastic Common Ground album. The membership changes brought a number of new writers into the fold and so there was an abundance of extra material which was completely up to the high BBT standards… a plot was hatched. So what we have is 47 minutes of new music, fashioned into a coherent whole.

From the cheerful count in by NDV, the album bursts out of the starting blocks with the tremendous “Made From Sunshine”. The tag line was taken from a phrase new guitarist Dave Foster’s mother used to describe him, and inspired David L L to write those lyrics over Dave F’s musical track. What’s also fantastic about this is that the album launches with the whole gang on board, Clare Lindley and Carly Bryant contribute vocals and we have the amazing tones of the BBT Brass band led by Dave Desmond. With track 2, we shift back to a four-piece line up, on Nick D’ Virgilio’s “The Connection Plan”. The build up of this track is a real highlight as David’s voice joins violin, before the bass kicks in, followed by NDV’s drums and vocals. There’s all sort of musical merriment going on with Mellotron, synths, organs and vibraphones causing this song to bounce along, including a wonderful guitar solo from Rikard. BBT often tackle serious and somber subject matter but this song of connection is filled with joy!

“Lanterna” – well, which prog band would be writing a song about an Italian lighthouse? But of course the inspiration is taken to another place as the theme of safe harbour is explored in Greg’s lyrics, with a nice, harmony filled nod to the phrase “Common Ground”. This is a track where Rob Aubrey’s mix deserves its own round of applause… with so many musical elements going on, the track doesn’t feel cluttered, and the focus is on just the right place – from Carly’s oceanic piano run as the song lifts off, to the proggier interplay, right down to how the male and female backing vocals are featured in different combinations to accent the lead vocal. All of this builds to an amazing ending – I’ve already mentioned it but once again Rikard’s guitar playing, which perhaps didn’t feature quite so much in the previous line up, gets a real chance to shine. If you’re a reader of this website, you’ll know how much we love the physical product and so the Welcome To The Planet experience is greatly enhanced by the artwork of Sarah Ewing, with beautiful images to accompany each track!

From the fury of the raging seas, we are set back on dry land… Rome to be precise, into the presence of the “Capitoline Venus”. Inspired by that statue, Greg’s love song to his wife is just Greg and David L, with a 12 string guitar, and some mellotron and piano. It’s one of BBT’s most poignant and beautiful tracks, simple as that. In fact I’d go so far as to say it’s an injustice if such a beautiful song ended up “hidden” with what people might perceive as an album of “that weird prog music”.

The album has 2 instrumentals, “A Room With No Ceiling” by Rikard and “Bats In the Belfry” by Nick. Rikard’s track is a showcase for his guitar and keyboard skills, backed by Greg and Nick’s rhythm section. It’s certainly the proggiest moment on the album and… okay it has to be said… it’s got accordions (the Accordion Prog trend starts here). Like many of the tracks, it’s a joyful one with musical moments that bring a smile to the face with their inventiveness and playfulness. Nick’s instrumental is perhaps more what we might expect, with a killer drum groove, joined by the BBT brass, extending what those who’ve seen the band live will have experienced in the “Drum n Brass” solos.

Lodged between the two, we have sort of a BBT Christmas single, “Proper Jack Froster”, which, if you’re a fan, you’ll already be familiar with. It’s an upbeat seasonal romp, with all sort of sonic elements popping in – violin, electric piano, Hammond organ, 12 string guitar licks, the brass band and wonderful bridge vocal by Carly Bryant, that leads to some great guitar / bass / violin interplay before a festive ending! BBT are the masters of the sound picture, you don’t even need the animated video to “see” the story here – the musical elements tell the whole story!

While this album doesn’t have a lengthy BBT epic, “Oak and Stone” comes close, cramming much into its 7+ minutes running time. And just when you think it has come to a suitably epic chorus and ending, an intriguing vocal end section finishes the song off – another fresh approach that can be felt throughout this album.

All of that leads very nicely into the album’s surprising closer and title track, the first BBT composition from Carly Bryant. Most of the ensemble is now back on stage for the grand finale and this track is like nothing else in the BBT catalogue, in the very best way. Lyrically it’s a million miles from the epic story telling, and instead is an incredible atmospheric, almost soundscape-like piece. After a vocal opening, we are led into a more free-form mid-section, where Bryant’s keys and synth interact with Longdon’s flute, before some “The Great Gig In The Sky”-style vocal improvs get swept away by a vaudeville jazz band! An ethereal choir returns us to some sort of normality as Carly closes off the song. It’s a track that is best appreciated, in my opinion, through your “big speakers” (ditch the air pods people!), with the volume cranked, and just let this one take you away. Magnificent!

If you haven’t picked it up already, I’ve been blown away by Welcome To The Planet! Far from being a bonus album, this one stands proudly in the BBT catalogue, showcasing what the band does best, and bringing lots of new and interesting elements into the mix, continuing the journey that we passengers have enjoyed over the years. Like any train ride, people will board and leave the train – even real trains have a change of driver sometimes! But let it be said, the engine driver we have been missing in recent months, gave us one heck of a final trip!

Part One
1. Made from Sunshine
2. The Connection Plan
3. Lanterna
4. Capitoline Venus
5. A Room with No Ceiling
Part Two
6. Proper Jack Froster
7. Bats in the Belfry
8. Oak and Stone
9. Welcome to the Planet