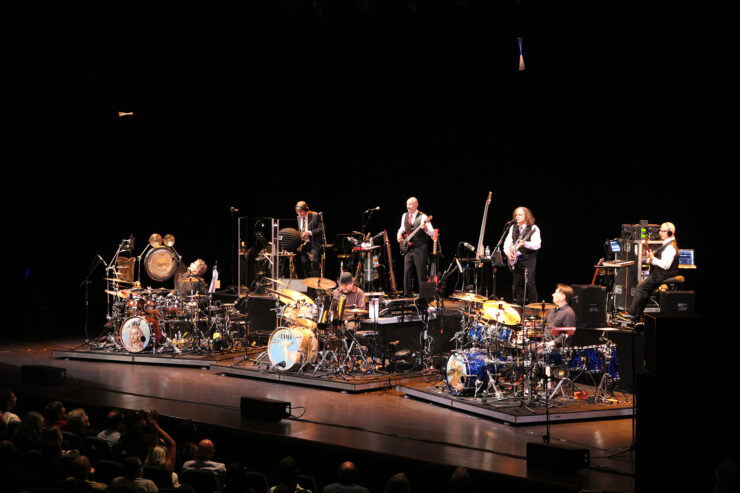 If Yes and Genesis were the most popular kids in prog-rock school, it’s been said, then Robert Fripp’s King Crimson was more like the weird savant in the back of the classroom who didn’t even try to fit in with the others. Crim’s reputation for nonconformity and unconventional brilliance was on full display during the second stop on its new “Music is Our Friend” North American tour at the Old School Square Pavilion Friday night in Delray Beach, Florida.

The two-hour concert – the second of 28 the newly reformed band will deliver this summer and fall – broke the mold and set a new bar for live rock shows, even by progressive rock standards:
• There was not a word of between-song patter; no distracting over-the-top light show or annoying multimedia presentations;
• The sound production was letter-perfect, with every lyric and note delivered with diamond-cut precision and crystal clarity;
• And the seven-man lineup featured three drummers seated at the front of the stage, with Fripp and the other players on a raised platform behind them — a first in the annals of concert performances.

These breaks with rock-show tradition emphasized the sole focus of the evening: The challenging, experimental music that has been the band’s calling card since its seminal 1969 debut, In the Court of the Crimson King (arguably the first proper progressive rock album). The show opened with perhaps the most audacious surprise of the evening — a jaw-dropping rendition of “Drumzilla,” a triple-drum solo featuring all three stick men — Pat Mastelotto, Gavin Harrison and Jeremy Stacey. It was a dazzling selection from the Fripp toolbox that gamely answered the question: Why would Crim choose to tour with three drummers (and open the show with four solid minutes of percussive madness)?

The sophisticated arrangements and wild spontaneity of the propulsive opener combined Mastelotto’s wild electro-acoustic mastery with Harrison’s monstrous virtuosity and Stacey’s grounded letter-perfect timing. It was a delightful triple threat that demonstrated how six hands, six feet and three remarkable like-minded musos can produce a powerful and stirring noise. As the trio traded percussive accents and melodic licks, some in the crowd rose to their feet – in the first of many standing ovations of the evening.

From here, Fripp led the band through more than a dozen Crim favorites and rarities, showcasing tracks from eight of the band’s 13 studio albums. The wide-ranging setlist spanned five decades of music, spotlighting each distinctive era of this legendary prog-rock collective. Fripp and friends paid tribute to King Crimson Mach I – the most melodic and symphonic era of the band – with three tracks from the debut album: “Epitaph,” “21st Century Schizoid Man” and “In the Court of the Crimson King.”

King Crimson Mach II – the band’s frighteningly experimental 1970s period — was amply showcased by “Pictures of a City” from 1970’s In the Wake of Poseidon, the title track from 1971’s Islands and two standouts from 1974’s Red, the title track and “Starless.”

The evening also featured a sampling of highpoints from the past four decades – including the knotty “Indiscipline” from 1981’s Discipline LP, “Neurotica” from 1982’s Beat, “Larks Tongues in Aspic Part 5 (Level 5)” from 2003’s The Power to Believe and the rarity “Radical Action to Unseat the Hold of Monkey Mind” from 2016. Most performances were loyal to the originals but allowed room for solos and variations that gave the older compositions in particular a new freshness and vigor.

Through it all, Fripp was a stoic ringmaster, standing stiffly stage left – almost in the wings. Looking more like a lawyer than a rock star — in crisp white shirt, black tie and vest – he never spoke a word and rarely cracked a smile. But, as ever, he let his guitar do the talking – his sustain-on-steroids solos cutting through the complex turbulence of that signature King Crimson sound – heartbreakingly beautiful and breathtakingly executed.

The result was a delightful retrospective that managed to have both the ring of familiarity and also feature Crim’s characteristic knack for delivering musical results that are consistently unexpected.

Worth noting: Four songs into the outdoor concert, the skies opened up, delivering a torrential downpour – sending many in the audience to run for cover. Minutes later, as if on cue, Jakszyk delivered the signature line from “Islands” — “Field and glade wait only for rain” – provoking some laughter from the drenched fans up front.

But here’s the kicker: Despite the heavy rainstorm, very few concertgoers left the venue for drier surroundings. This revealed, as much as anything, how captivating and enchanting the music of King Crimson remains after all these years.

Near the end of the second set, Jakszyk once again seemed to channel the spirit of the crowd, voicing the lyrics from “Indiscipline,” which pretty much explain the staying power of these pioneering prog rockers:
“The fact is…
No matter how closely I study it
No matter how I take it apart
No matter how I’ll break it down
It remains consistent
I wish you were here to see it!”