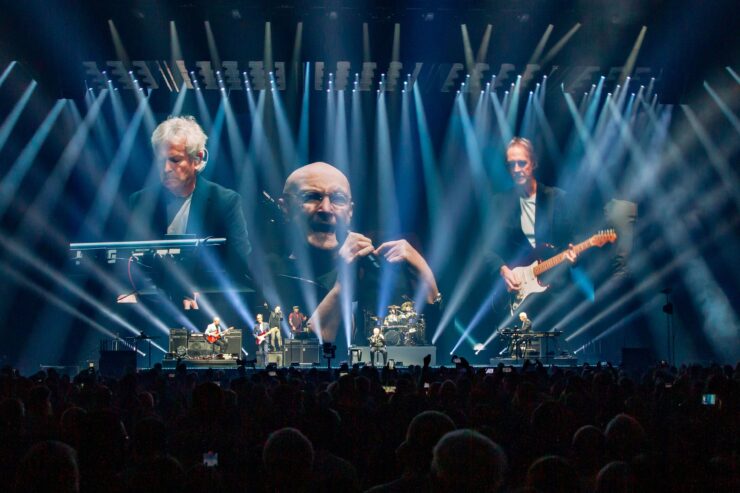 There was so much anticipation for this concert. More than I can recall in many years. Not only because it was the first concert I would be attending in 20 months, but this was perhaps the last time the legendary Genesis would be touring, and the last time I would see a band that had helped shape prog and pop rock for decades. Much has been said about Phil Collins’ health and at times recently on TV, it has looked both worrisome and sad. But in watching videos of previous shows online, it looked like he was up to the task and reviews had been favorable. So how did the iconic frontman and the band fare in Charlotte, North Carolina?

The partially masked audience filtered in nearly an hour before the show even began, while the lines at the merch stands wrapped around the concessions. The fan base, albeit slightly on the older side, had come out in full force. No doubt, for many others, this was their return to a concert setting as well.

The band took the stage approximately at 8:15pm with no opening act and immediately kicked in to the perfect opening refrains of “Behind The Lines” which led into “Turn It On Again.” As the drums joined in, the enormous screens behind the band presented the trio of Mike Rutherford, Tony Banks, and Phil. Yes, Phil was sitting, and looked older, but as soon as the voice kicked, there was a feeling of comfort that this was going to go ok. The earlier part of the show ran through some hits like ‘Mama” and “Land of Confusion”, as well fan favorites “Home by the Sea” and the combined trio of “Fading Lights/The Cinema Show/Afterglow”, which was the highlight of the show to that point. While Collins struggled with parts that required extra power like in “Mama”, he was that much more sincere and brilliant with songs like “Fading Lights” and “Afterglow.”

Throughout the show, Collins talked to the crowd, entertaining with jokes and stories leading into songs. You could tell the crowd was rooting for him and willing to give him the benefit of the doubt. And he was as engaging and charming as he had always been, just from a chair.

The band then all came forward to the front of the stage for three stripped down tracks: “That’s All”, “The Lamb Lies Down on Broadway”, and “Follow You, Follow Me.” The three songs worked great with those new arrangements and provided a great opportunity for fans to join in and sing along.

The UK shows had the band performing the Duke album deep-track “Duchess,” however, in the first few US shows the band had swapped that track out for the more well-known “Misunderstanding.” But on this night the band would bring back “Duchess,” which was easily one of the highlights of the evening. Collins sounded brilliant, and the visuals were extraordinary. From there, they continued with a mix of hits and favorites including “No Son of Mine”, “Firth of Fifth”, “I Know What I Like” and the epic “Domino.” This segment of the show seemed to be where Collins really hit his stride, his voice gaining in power and confidence. The last few songs of the main set were the band’s biggest hits: “Throwing It All Away”, “Tonight, Tonight Tonight” and of course, “Invisible Touch.”

Mike Rutherford and Tony Banks were as solid as ever, playing each note as you remember it, and long time touring member Daryl Stuermer showed why he continues to be the band’s go to member after all these years. Perhaps the underrated star of the show was Phil’s son Nic Collins on drums. He was absolutely captivating, playing all of his father’s parts with precision, power and feel.  Additionally, the sound and visuals were outstanding and helped elevate the performances of the each song.

The encore consisted of the 90’s era hit “I Can’t Dance” and “Carpet Crawlers” which was preceded with the opening a capella portion of “Dancing With the Moonlit Knight.” Those two songs perhaps perfectly epitomize the uniqueness of this band that has one of the most diverse catalogs in music. They have just as many fans of the early prog period now as they do fans of the 80s and 90s hits when the band was at their peak. Yet somehow they are able to find the special balance to make an evening that can make both happy. This is the band’s greatest legacy and why they mean so much to so many people.

This was a special evening. It maybe wasn’t the band in their prime, but it didn’t matter. Our heroes will not be around forever, so it is special to enjoy these moments for what they are, a trip down nostalgia road, and a celebration of one of the greatest bands to ever exist. Maybe if we’re lucky they will still find one more time to come around. But if not, thank you to Phil, Mike, and Tony, for the decades of incredible music and for letting us revel in their genius one last time.

Here are some highlights from the show: