The Dear Hunter – Act V: Hymns With The Devil In Confessional (Album Review) 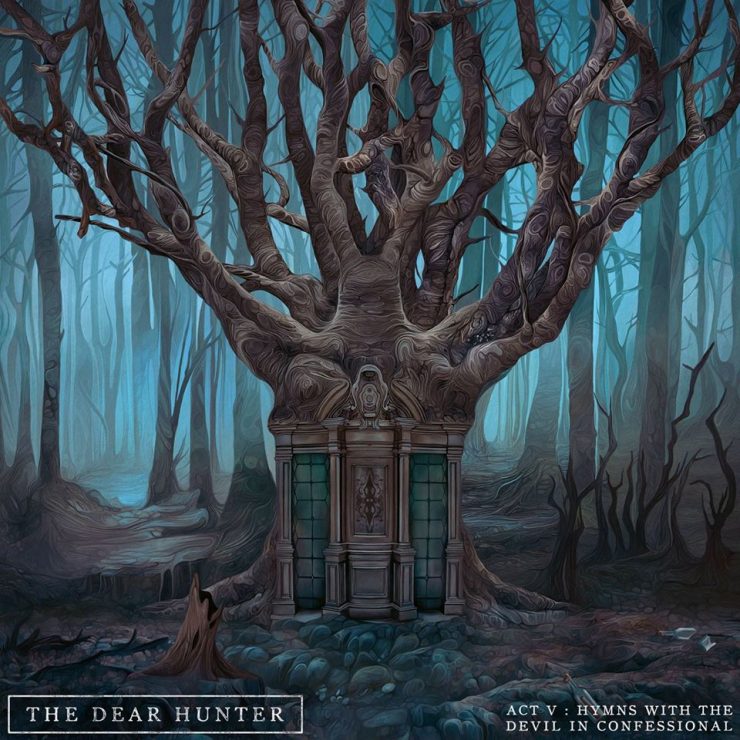 Review of The Dear Hunter – Act V:Hymns With The Devil In Confessional

In 2015, Casey Crescenzo and his band The Dear Hunter returned to the “Act” series that began with Act 1 on 2006. After taking a few years away from the series after Act III, and releasing a couple of albums that were not conceptual, Act IV saw a return to what fans have come to love from this eclectic group. Now, only a year later, comes Act V, continuing the story and complex musical tapestry that has made this group so unique. There is no band like The Dear Hunter and it is safe to say, there is not another album like this that has come out this year. At first listen, so many aspects catch your attention, that it is hard to describe exactly what this album is. Is it Prog, is it indie, is it pop, is it alternative? Yes, yes, yes and yes.

Crescenzo draws from a plethora of influences from The Beatles to ELO to Radiohead. It’s possible that calling this band and their sound Prog is a bit of a disservice. They are decidedly more modern sounding and less of a technical beast than the prototypical Prog group. At times, they sound more like an elaborate version of Death Cab for Cutie if they attempted a Prog Rock opera. Regardless, it all makes for something entirely different and spectacular.

The album opens with a 2 minute orchestral intro with strings and harps layered behind the chorus of Crescenzo and background singers. From there, each song presents its own unique direction and arrangement. No 2 songs sound alike. The second track “The Moon/Awake” starts off as an alternative rocker with monstrous orchestration and multiple acoustic guitars. Female background singers add to the huge sound. The following track “Cascade” is a psychedelic jaunt where the title of the album “Hymns with the Devil in Confessional” stems from. The instrumentation is more like something you might find on a Carpenters album, but it has a rawness about it as well, that gives it the modern take on a classic sound. Crescenzo is a masterful arranger and this song is a perfect example. Small things like the trumpets added at the end of the middle 8 are something only heard the 8th time you listen to the song but then you hear it and you think, wow genius!

As a listener you begin to get the idea that around each turn there will be another surprise. Songs 5-10 are where the real revelations begin, making it hard to pick a point to stop. It all starts with the band’s second single, the Pulp Fiction-esque “The Revival” which if Tarantino ever hears, might end up in his next film. This song sounds like a mix between the Stray Cats and the 60s Batman TV Show theme. This is the kind of stuff that you find only on album from this band. From there comes the gorgeous “Melpomene” a lullaby ballad created with majestic string arrangements and a single piano. Not to let things get stale, from there we have the Rat Pack stylings of “Mr. Usher” where Crescenzo musters up his best Tony Bennet impression along with a full big band and even with a throwback to the Andrew Sisters (for those who don’t know, look it up).

Next up is the “The Haves Have Naught” which is pure musical-fare, but is also the lead-in to the magnificent acoustic ballad, “Light”, which could and should be a hit on radio today if the world was fair. The story of a father apologizing to his son for his flaws is simplistic but brilliant. Then comes the album’s first single “Gloria”, the hard rocking track that explores the band’s penchant for writing a great rock song. Here Crescenzo sounds like he could be lead singer for Fall Out Boy, just another one of the surprises thrown into the mix. There is plenty more to go from this point on in the record but to go through each of the tracks is a bit of an injustice so the rest will be left for you the listener to explore.

With so much of new Prog either sounding retro or metal, The Dear Hunter offer an alternative to anyone searching for something complex, yet accessible, something thought-provoking, yet entertaining. While coming off more like a soundtrack than just a standard album, the result here is one of the most refreshing and enjoyable albums of the year. Everything here is top-notch from each member’s performances to the pristine production. It is an album that demands multiple listens and offers such immense diversity that increased listens offers a chance to discover something new and exhilarating about the album every time. This 5th installment of their 6 Act suite only makes the anticipation for Act 6, in whatever form it ends up being, all that much greater