Album Spotlights: The Fierce and The Dead; Adam Holzman; The Aaron Clift Experiment 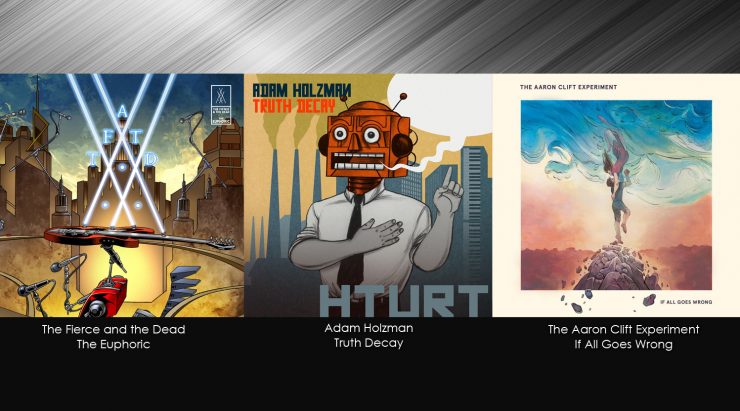 A look at some albums you might have missed this year.

With so many albums released each week it can happen that we might have missed providing a review on some very good albums you need to be aware of.  This is the our new feature Album Spotlights, highlighting some albums you might have missed. These are all albums that are already out.

This London based instrumental group released their latest album The Euphoric just last month and the album has earned the group a ton of praise and accolades, most notably being nominated for 2 Prog Music Awards for Band of the Year and Album Cover of the Year.  The album covers a lot of musical territory while providing the type of raw combination of experimental space rock and melody that the group have long been known for.  The singles “Truck” and “1991” are perfect examples of the high quality of songwriting.  Guitarist Matt Stevens was recently a guest on the Prog Report podcast and talked about the album. If you like inventive and entertaining instrumental rock, this is an album you must pick up. https://tfatd.bandcamp.com/album/the-euphoric

Adam Holzman has long been known as a great Jazz musician and most recently has been Steven Wilson’s keyboard player on his successful solo albums. The release of his latest Truth Decay came while on tour with Wilson during the To The Bone tour. A few of his Wilson bandmates make appearances here including Nick Beggs, Craig Blundell and Steven Wilson. The collection is a mix of Prog, Jazz, Fusion, and Rock, with a few vocal appearances by Nick Beggs and Randy McStine who takes the reins on a blistering remake of “A House Is Not A Motel,” from Love’s classic album Forever Changes. Fans of Wilson will certainly need to check out this album for an enjoyable mix of styles by one of prog’s unheralded keyboard masters. https://www.amazon.com/Truth-Decay-Adam-Holzman/dp/B07926TFTG

The third studio album by this American based prog band finds the band branching out from their more traditional prog sound of their last album Outer Light, Inner Darkness. A good example is the opening track and first single “Faith” which is a pure rocker where singer Clift ventures into hard rock vocal territory. Other tracks like “Absent Lovers” recalls a bit of Jethro Tull, while the brilliant “Better off Before” enters Queen pop territory, a place where this band shines brightest. “Dream Within a Dream” is a highlight of pure prog bombast.
The Aaron Clift Experiment is a band that is unafraid of risks and taking on different styles, some better than others, but nevertheless a worthy album to check out this year. https://theaaroncliftexperiment.bandcamp.com/album/if-all-goes-wrong