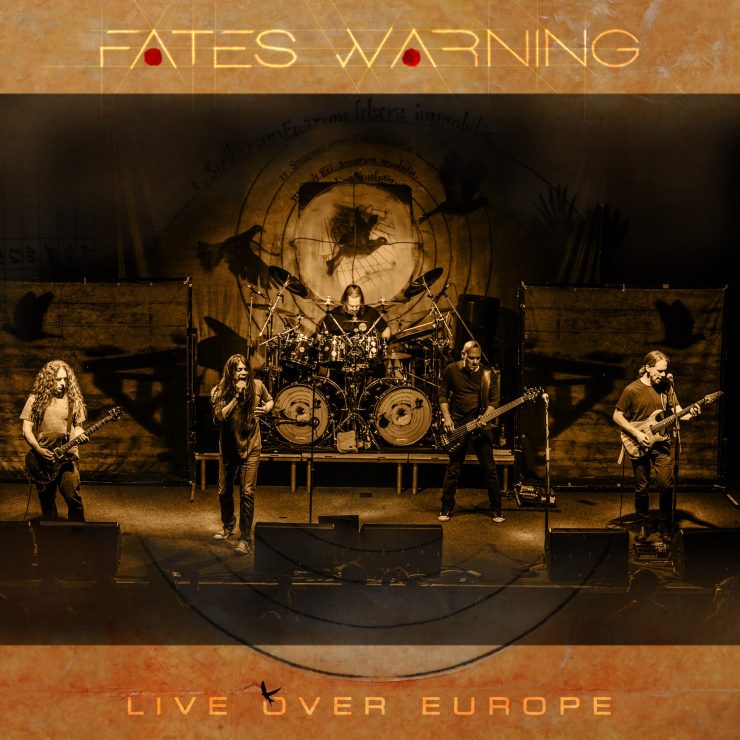 Review of Live Over Europe from Fates Warning, out June 29th, 2018

For those of us into progressive metal, singer Ray Alder was recently quoted as saying “you’re playing something in 7 but the vocals are actually doing something in 4, which is pretty confusing to most people”. Of course he’s speaking of a stylistic hallmark, and what many of us are drawn to in prog music, odd time signatures. On the subject of melody over odd timing, I can think of no better, no more consistent band over the last 3 decades than Fates Warning.

Live Over Europe is their latest offering documenting their Theories of Flight European tour. I’ll start by saying I am not a fan of most live albums, particularly those that are recorded at different venues in different cities. Most times they seem uninspired, disjointed and worthy of only an initial listen or two. This album is the POLAR opposite of that view and I’ve listened to hardly anything else for several weeks now!

If you’re a fan of this band, you’ll know (and lament) that they don’t tour often or very extensively. That said, when they do tour, they seem a well-oiled machine firing on all cylinders. And that is definitely the case with this incredible double live album, their first since 1998’s “Still Life”.

Every Alder-era album is represented here, and it serves as a live, 23 track “greatest hits” of sorts. The songs span decades, but they have that unmistakable Jim Matheos stamp on them. And they are flawlessly executed by this 5-headed musical beast. The not-of-this-earth drumming by Bobby Jarzombek locks in with the heavy, technical groove of Joey Vera to put some stank on the tight and complex rhythms of these songs. Touring guitarist Mike Abdow adds a great element here and more than competently does justice to Frank Aresti’s guitar & vocal parts.

I was fortunate enough to see Fates perform twice on this most recent tour and the band was in fine form. Matheos, for his part, was as stoic as I’ve ever seen him. And yet one corner of his mouth would occasionally curve upward, revealing his enjoyment in playing this music for a live audience once again. And Ray Alders’ voice sounds simply fantastic on this release! Powerful, melodic, rich and in control. He’s a man who has “found his voice” in a post-stratospheric metal scream era. Prog metal vocals many times waffle between super high pitched and/or cold and mechanical. Ray has the ability to inject heart, soul and emotion into every syllable.

Overall, the production sounds amazing, particularly for a live album from different locations. It sounds and feels like one continuous and fully immersive live show. The classics are here…”Point of View,” “Monument,” “Eye to Eye,” even”Silent Cries” from Alders debut. Some of the quieter moments really stand out, such as Falling and Wish. But the songs that truly shine are the newer tracks from their most recent albums.”Firefly,” the one-two punch of “Seven Stars” and “SOS” and most notably “The Light and Shade of Things,” a song every bit as good as anything this band has EVER created.

I’d be remiss if I didn’t mention the disappointment of many with Alder exiting his other progressive metal home for the last decade & a half, Redemption. He made some absolutely stunning music with them (check them out!) but ultimately couldn’t sustain both bands. After a nearly decade long hiatus, Fates Warning seems to be reactivated and reinvigorated once again. That’s good news for FW fans and progressive music enthusiasts in general, as this band has been hugely influential on countless other bands that have come up after them. We can only hope they keep up the pace of releasing new music and touring.

Even if live recordings aren’t usually your cup of tea, Live Over Europe is without doubt, well worth your time and money. The production is fantastic and really draws you in to the live atmosphere. I would even dare say this would be a strong introduction to the Fates Warning uninitiated, since it covers all eras of the band. Until we get another studio album, this will serve as a great live souvenir of a band who 36 years into their existence is inexplicably reaching new levels of melodic, progressive creativity.