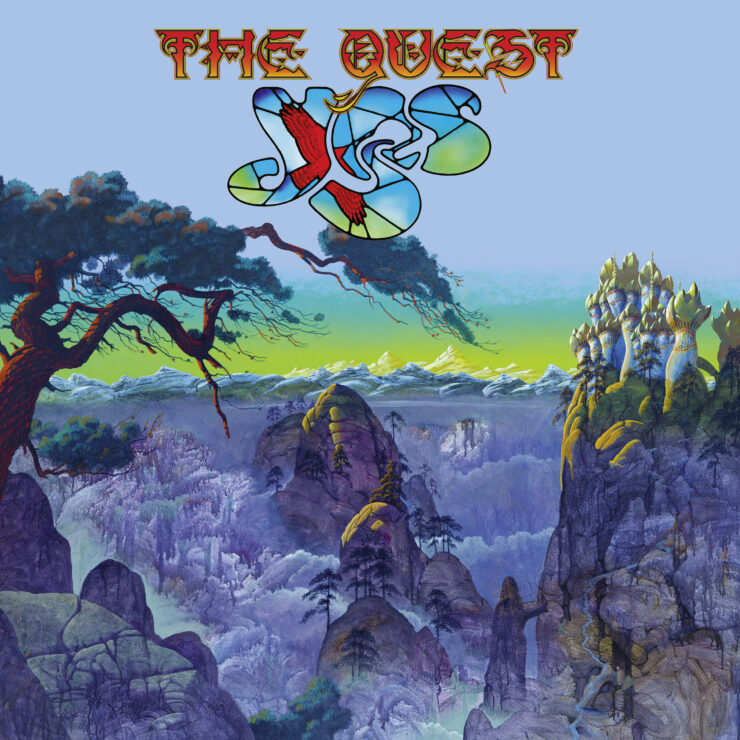 Review of the new Yes album – ‘The Quest’

I imagine that for the last 7 years virtually every interview with current members of Yes featured the question: When are you going to release a new album? Well, we now know that recording began in 2019, and in October 2021, the 22nd studio album from the band, The Quest, will be released.

Let’s be honest, when Heaven & Earth landed, following 2001’s Magnification and 2011’s Fly From Here, the fan base didn’t really take it to their hearts. The band did play some of the tracks live (Believe Again, The Game, To Ascend) but really it has disappeared without trace since then. Also since then, the band experienced the sad passing of founding member Chris Squire, replaced by his designated successor, Billy Sherwood, in what is now the longest line-up of the band without having had a change of member! So… the scene is set… 2019’s musical ideas began to be recorded by the globally distanced band members, with Howe, Downes, and a U.K. based Davison working together while the US-based rhythm section of White and Sherwood made their contributions across the Atlantic.

With all of that history, plus with possibly one of the most polarised fan bases of any group, how does The Quest fair?

I’ve three main things to say about the album:

(1) It’s a different sounding Yes, which is as it should be!

As a long-time fan, The Quest sounds like the work of a new lineup, with a new approach. A lot of the album occupies a lighter, less intense, and more reflective space than you might be expecting. Lead track “The Ice Bridge,” with its heavier sound and guitar/keyboard duel on the outro is a great opener – but it’s also the most “rock” track on the album. There is much more acoustic guitar than you might expect on this album, played of course by Howe but also by Davison on “Future Memories,” a track solely written by him. It’s one of the album’s highlights with Jon’s acoustic, Steve’s steel and Billy’s fretless bass, plus some light and organ backing from Downes and no drums, supporting the Davison/Sherwood vocals.

Howe’s 3 tracks on the album, similarly, don’t present Steve Howe electric shredder but include a lighter touch and beautifully rich guitar textures, similar to moments on his recent Love Is album. It’s clear that in his role as producer, Howe hasn’t sought so much as to make a facsimile of Yes-music Past, but instead has worked hard to produce an album of strong songs that sound great. Take Howe’s “Music To My Ears,” which has a great band feel, with a variety of acoustic and electric guitar tones, while Downes plays piano, synths, and a suitably prog Mellotron, on top of the White/ Sherwood rhythm section. Like all 3 Howe songs, it’s credited as a vocal duet (think “Hour of Need’ or “It Was All We Knew” on previous albums) with Davison, a combination that Howe’s own Love Is album showed us worked well together.

(2) It’s an album of diversity and unity

With tracks initiated individually by Howe, Downes, Davison,” and Sherwood, a variety of styles and approaches feature in the album. To contrast with the Howe tracks I mentioned above, “Minus The Man” and “The Western Edge,” the songs written by Sherwood/ Davison, have a different feel. If you’re familiar with Sherwood projects such as Circa and the Prog Collective, you’ll know how Billy doesn’t tend to write straight verse/ chorus and will often use less predictable meters and time signatures, which give the music a real prog edge. “The Western Edge” is one such example and is a very strong collaboration – perhaps fitting the sort of track and sound that many had expected from Arc of Life. It’s great to hear Sherwood’s vocals featuring prominently as the lead in places, as well as combining well with Jon. I also have to mention his bass style and tone – as a friend and fan of the founding Yes bassist, it must have been challenging to decide how to approach new Yes music. To my ears, Sherwood has decided to serve the song as is appropriate – that means it’s not clanging Rickenbacker-style tones throughout. Compare “Minus The Man” kicking off with a bass riff which underpins the entire track, to the second single, “Dare To Know” where the bass is firmly in its backing role with White’s drumming, but doesn’t take over in a “lead bass” style which Squire favored at times. Overall Billy brings a shed load of color and warmth to this album and should be applauded for keeping the flame alive while pushing Yes forward.

Equally diverse are the two Downes tracks, with Geoff’s songs opening and closing the album. “The Ice Bridge,” which I expect many of you will have heard, is one thing, while the closing “A Living Island” is reminiscent of some of DBA’s best moments, as this three-part track builds towards the superb “We Will Remember” finale.

However the diversity of styles is underpinned by an overall unity: Davison’s voice is strong and plays an important part in making the whole album stick, while the common lyrical themes of nature (including how we don’t treat it as well as we should) and technology recur in places bringing a thematic unity of sorts rather than a straight concept album.

Yes, I know… it’s a common reviewer comment but one I truly believe is justified in this case. Howe and Curtis Schwartz’s sonics mean the album has a consistent sound (including a surround mix which I’m excited to hear) and the sequencing means the album flows through its 45 minutes. People have questioned the inclusion of 3 tracks on a bonus disc, but a straight listen-through from “The Ice Bridge” to “A Living Island” without interruption shows how this has been crafted as an old-style 45 minute “album- length” release.

The 3 bonus disc tracks are, in my opinion, just that – bonuses that don’t really fit or didn’t make the new album. The strongest of the three “Sister Sleeping Soul” features Howe’s Portuguese 12 string guitar (from songs like “Your Move” and “Nine Voices”) and a really great blend of Howe and Davison’s vocals that work better than some of the main album’s duet combinations. The rhythm section also plays a key part in this track, with some great bass lines and emphasis on the breakdowns. “Mystery Tour,” a tribute to Liverpool’s finest, isn’t a song I expect to return to. The final track, “Damaged World” has prominent Steve Howe vocals and feels more like a solo song, and the closing section has a nice shift in style with a Downes Hammond solo – overall it’s not unpleasant, but fairly lightweight.

So in conclusion, this is a very well-produced album of really good songs that show the writing and playing skills of each of the band members. It has a unity and consistency of pace, not pushing raging, technical prog but tapping into many musical sounds and elements that mean that when you listen, you know you’re hearing Yes Now, as a debut album for the line up I really hope this begins to show the band taking their studio work seriously and pushing on towards the next one! The Quest is undoubtedly a strong release for this lineup and one Yes fans should enjoy as the band continues onward with a brand new label and hopefully more music to come!

Released on Oct. 1st, 2021 on InsideOutMusic