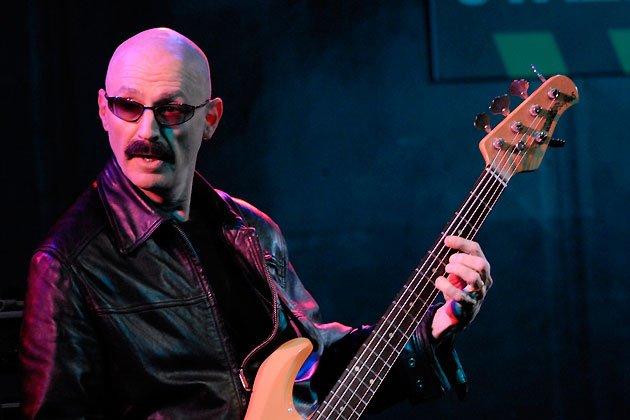 Tony Levin talks with The Prog Report about his latest project, a Jazz album with his brother Pete Levin, and other Prog projects from his amazing career.

Tony Levin is one of the most accomplished and recognized bass players in all of music, having worked with King Crimson, Peter Gabriel, Liquid Tension Experiment and having played with hundreds of other artists.  He talked with The Prog Report about his latest project, a Jazz album with his brother Pete Levin, and about some of his Prog projects from his amazing career.

How did the idea of recording a Jazz album with your brother come about?

In a very interesting way. When we were kids we listened a lot to Pete’s collection of jazz albums (he’s the older brother, who could afford to get a few records) and especially liked the ‘cool jazz’ recordings of Julius Watkins on jazz French Horn (which is the instrument Pete played then) and Oscar Pettiford on cello and bass.

Many many years later, just 4 or 5 years ago, I was practicing my new electric cello, and it hit me that Pete and I could be the two ‘voices’ in a jazz song that might be a little like those records. I asked Pete and it turned out we both remembered all those pieces quite well (that’s a sign of what good music it was) and we embarked on writing songs, short, melodic and with succinct solos, that we hope might be somewhere near as good as those classics. We wrote many, and were able to take the best of them.

Have you always wanted to do a Jazz album?

Can’t say that it was a priority to me until we flashed on that wonderful music style from the 50’s. As usual with the bands and records I’m involved with, it was music that led the way – I just happily followed behind.

I did have to practice my cello quite a lot – in much of my free time over 3 years – to be able to solo at a decent level. On bass I’m not usually the soloist – or playing the melody. (I’ve gone deep into that territory now, with a couple of songs that have bass playing the melody, and most of the rest with the cello doing it.)

Was this the first time you guys have worked together?  What was it like?   Had you ever tried before?

Pete and I have worked together a lot; on quite a few albums, on some of Pete’s solo jazz albums, he’s played on some of mine, and toured with my rock band for a bit. We also toured together in Paul Simon’s band.

But this is the first time we set out to make an album together from the outset, and it was great fun to make and very satisfying to have it coming out. I’m sure we’ll do more in the future.

Pete’s my older brother (by 3 years) and has been my mentor in all aspects of music.\

Which of your Progressive rock projects he has been in was the best / most rewarding or challenging? King Crimson, ABWH , Liquid Tension ?

I don’t really compare projects, or tours or even bands. All of those had great, rewarding moments – and probably some rough spots in all of them.  King Crimson is by far the longest music relationship of those you listed – and the one currently still going on (so I’m still learning from the players and the music in it.)

Tell me about the project the Crimson ProjeKCt?  How was that put together and is it an ongoing thing?  How was the tour?

The tour was fun and we enjoyed the many shows we’ve done this year. The band actually came about after a music Camp that Adrian, Pat and I put on, in the Catskill Mtns a few years ago. We did a public concert at the end of that, re-visiting some of the Crimson songs we’d played in the band, and the reception was so good, we decided to keep doing shows. King Crimson wasn’t in active mode at that time, and much later, when the band re-awoke, so to speak, there were a lot of tour commitments for the Crimson ProjeKCt to finish up, and they were fun. Now, with Crimson about to tour, it seemed best to put TCP into dormant mode.

Another project you recently did, was the Levin Minnemman Rudess album.  What was putting that together like?

That went really well, in that I was very happy with the musical outcome. Collaborative projects are fun, and you learn a lot, but where they suffer is that you don’t have time to come up with great compositions for them, or to throw out a few and keep the best ones. So it was a great feeling that, on the LMR record, we were able to come up with quite a few special ideas and bring them to fruition.

You’ve worked with a number of amazing drummers in you career, Bill Bruford, Mike Portnoy, Marco Minnemman and countless others.  What is working with those different styles like?  How does it change what you do?

For bassists it’s great being with a super drummer. All those players, and more that I’ve been lucky to team up with, take the music to a higher level. Hopefully, any drummer I play with has solid time – in other words, keeps the band together and the feel is right – then you both (bassist and drummer) can elaborate on that – one of the big difference between great drummers and average ones are that the basic feel and time doesn’t get messed up when more adventurous things are tried.

Do you enjoy touring or recording in the studio more?

I’m much more a fan of live playing.  I’ve made a lot of records, and that’s fun, but I get a deep satisfaction from the real concerts – and from the connection with fans of the music.

Any plans for a new Peter Gabriel album?