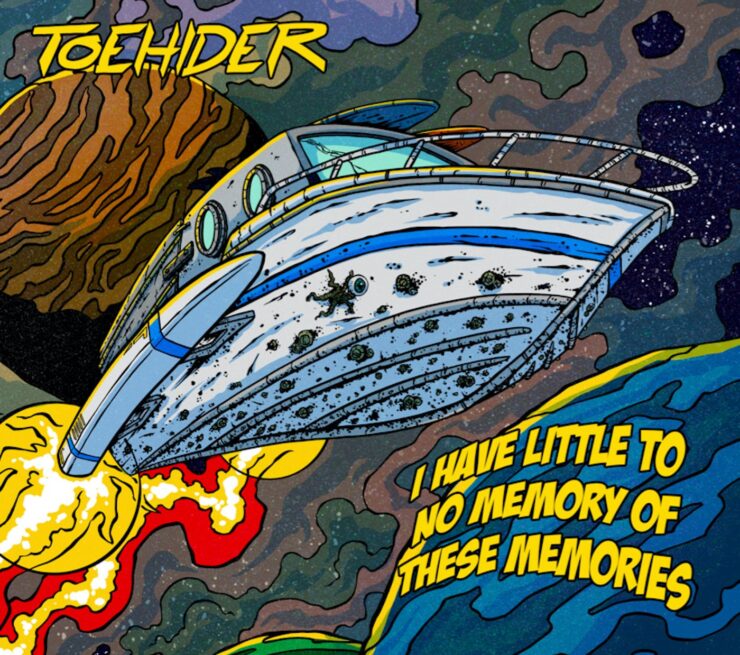 Melbourne’s TOEHIDER, the collaborative project between singer/multi-instrumentalist MIKE MILLS & graphic designer ANDREW SALTMARSH will release I HAVE LITTLE TO NO MEMORY OF THESE MEMORIES, the 5th full length studio album and 22nd overall release (after a series of 12 EPs in 12 months kickstarted the project a decade ago).

The album itself is a modern rock opera – intended to be listened to as a full 47-minute journey following the characters of ‘The Hoarder’ and ‘Bralien’ as well as a third character who declined to be featured in the story.

The first single “THE HOARDER” is a Toehider extravaganza, with a rapid-fire narrative delivered by singer Mike Mills over a funky rock groove. The video, animated by acclaimed artists Eleanor Evans & Giovanni Aguilar, brings the story to life in full colour with a combination of comic book imagery and stop-motion graphics, based on the images and characters created by Toehider’s illustrator Andrew Saltmarsh. The single & video introduce the world created for the album by Mills & Saltmarsh.

I HAVE LITTLE TO NO MEMORY OF THESE MEMORIES IS OUT THROUGH BIRD’S ROBE/MGM ON FRI SEPT 9th, 2022

Preorder now at –
https://toehider.bandcamp.com
TRACK LISTING –
1. I HAVE LITTLE TO NO MEMORY OF THESE MEMORIES

Watch the video for “The Hoarder” here:

Mike Mills says of the record:

“The 45 second song is quite prevalent now, instagram/tiktok social media microcontent and all that. I have a bug in my brain that purposely wanders toward something which is the opposite of what’s popular so I thought “Hey how about doing a 47 MINUTE long song?”

The new Toehider album is one song that lasts 47 minutes and 47 seconds.

It look me about 3 years to write and record it. It really came out great and it sounds like a sonic journey through the last 50 or so years of prog rock and metal.

Thematically it’s a comment on remembering. Where are our memories now? Do we even need to remember that much? Or are we trying to remember too much? Are we better off forgetting? Are these memories even mine? How?

The whole thing tells the story of a man, a woman, a huge bird, a dumb alien, and 2 boats that get modded to facilitate an outer-space confrontation.

There’s two different endings. One on the CD, the alternate ending on vinyl.

There’s also an amazing animated video for a portion of the song based on Salty’s characters, animated by Eleanor Evans & Giovanni Aguilar.

After releasing their debut EP back in 2008, Toehider caught the world’s attention by releasing an impressive 12 EPs in 12 months, covering everything from up-beat pop & heavy progressive metal, to children’s audiobooks & chilled out folk. Soon a live act was formed and, in 2011, the band’s first full album To Hide Her was released. The band continued to release albums over the next few years, while supporting a number of great acts on tour including Devin Townsend, Caligula’s Horse, Voyager and others.

In 2018, Toehider launched a Patreon campaign called ’49 Songs You Must Hear Before You Die’ as a home for Mike Mills and Salty’s prolific work and content. This project continued in 2019 with further livestreaming and content, as well as a series of digital re-releases marking the 10th anniversary of the 12in12 project, with additional commentary from Mike Mills on each track.

2020 saw the release of new album ‘I LIKE IT’ debuting at #2 on the AIR 100% Independent Charts and earning critical acclaim for its ambitious scope and execution. Mills and Saltmarsh also embarked on a marathon series of thrice weekly livestreams for fans during 2021 to entertain people stuck in lockdown during the worldwide pandemic.

2021 saw the announcement of the release of Toehider’s debut album ‘To Hide Her’ on vinyl for the first time, in celebration of its 10th anniversary. The record also reached #10 on the 100% Independent Chart in October 2021 and hit #11 again in June 2022.