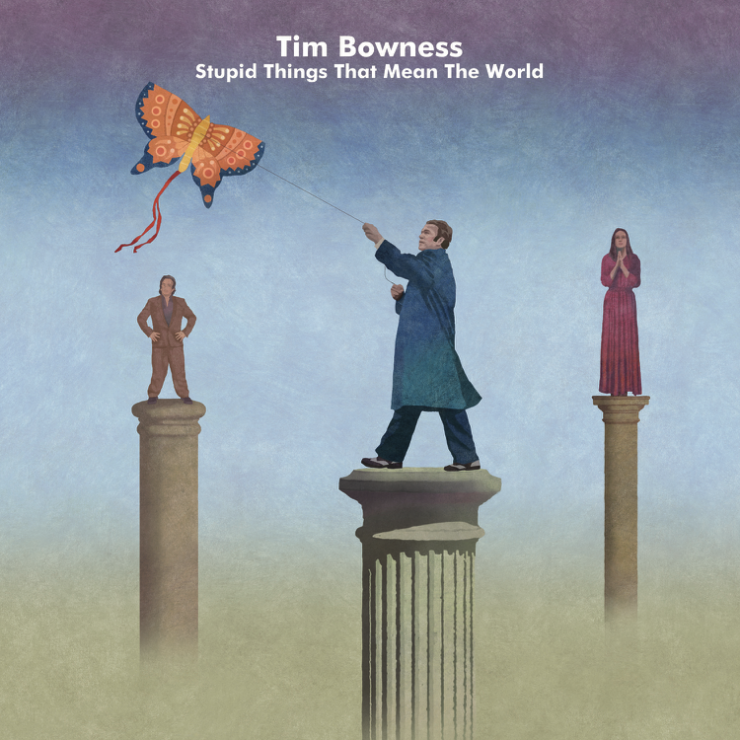 Review of the new Tim Bowness album “Stupid Things That Mean the World” due out on Inside Out Music July 24th in the US.

“The bridge over the traffic, conversations in the dark,” Tim Bowness sings on the opening lyrics to “Sing to Me”, the brilliant co-written piece with fellow No-Man cohort Steven Wilson.  Few Prog songwriters can paint as clear a picture lyrically as Bowness does on his latest effort, the aptly titled “Stupid Things that Mean the World.”  In a genre filled with excess, Bowness is skilled at stripping the unnecessary and focusing on the heart and meaning of the song.  Instrumentation is kept at a minimum unless needed for emphasis.  Following up his last solo effort, Abandoned Dancehall Dreams, Tim Bowness builds on that album by exploring the extremes of his sounds.  It is his ability to work the extremes of too little or too much, that makes this album so unique and pleasurable.

The opening track “The Great Electric Teenage Dream” targets the struggles of an artist who has been around a while and now has to figure out how to manage the new age of music.  “Your great electric teenage dream, Once a record, now an unpaid stream.”  The cavernous drum sound and minor keyboards drive most of the song, while the pressure builds with guitars and noises all the way until the end.  It is a great opener to the album but very quickly the vibe changes with the ballad “Sing To Me.”  That track was rebuilt from old No-Man demos that Steven Wilson sent to Bowness.  As the story goes, Bowness only kept the line Sing to Me and rewrote the rest.  The original demo called “Best Boy Electric” is on the bonus disc of the cd.  This is a beautiful song that somehow with its ending, still sounds like Steven Wilson produced the song and it is the highlight of the album.

The title track deals with looking back on moments in your life that once seemed so important but now seem so ‘stupid’.  These everyday references and issues that are dealt with in one’s life make this music more accessible.   Often Prog music can be more about the obscure, the imagery or spirituality, and while that is certainly fine, you sense those lyrics might have been misplaced on this record.  Oddly enough, the music behind those lyrics on this track are the most poppy on the record creating a weird dynamic.

On “Know that you were loved” Bowness pens a simple love song based on an acoustic guitar, however, the last few minutes of the song change completely from the basic melody and a new section is introduced with more sounds as if in an interlude between songs.  This precedes the track “Press Reset” that represents those extremes.  The first half is very quiet and built around mostly Bowness’ voice before kicking into the most rocking part of the album.   The album closes with the almost celtic-like “At the End of the Holiday,” another more quite moment on the album.

Tim Bowness has created an album that can work as a snapshot of life, from the more current to what was in the past.    ‘Stupid Things That Mean the World’ evokes emotions both beautiful and dark and amidst a lot of noise in life, helps fill in the quiet.  It is more accessible than his previous effort and represents a step forward in his songwriting.  And, as he seems to be prolific in his output these days, maybe we can be fortunate to get another new album next year too.

Produced by Tim Bowness and mixed by Bruce Soord