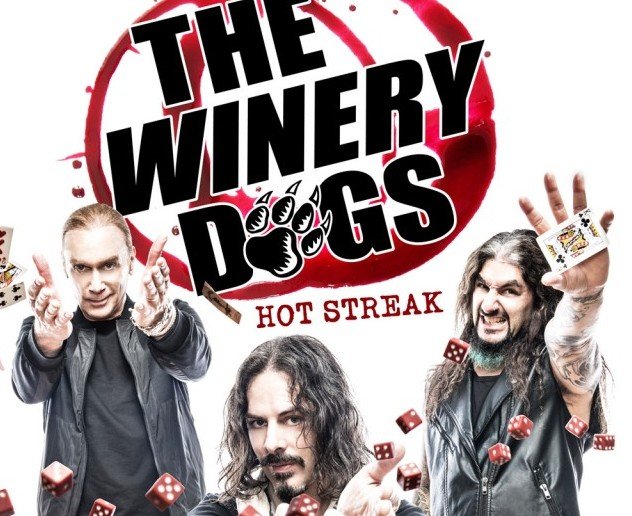 THE WINERY DOGS (Richie Kotzen-lead vocals/guitar, Mike Portnoy-drums, Billy Sheehan-bass) will release their second self-produced studio album, HOT STREAK, October 2 on Loud & Proud Records via RED (a division of Sony Music Entertainment) and in the rest of the world via earMUSIC. It will be preceded by the first single, “Oblivion,” set for release August 25 at radio.  A double vinyl edition of the new album is also in the works and is due out in early November.

After playing over 100 shows in support of their self-titled debut album, THE WINERY DOGS are eager to head back out on the road to get behind HOT STREAK. Their first round of U.S. headlining tour dates will kick off October 3 in Ridgefield, CT at the Ridgefield Playhouse. Shows around the globe are already being planned for 2016.

HOT STREAK shows the powerfully pedigreed trio’s initial burst of collective chemistry was no accident, from the strum and headbang of “Captain Love” to the propulsive uplifting vibe of “The Bridge” to the introspective acoustic harmonic convergence of “Fire.” If these three Dogs thought they captured lightning in a supper dish the first time around, HOT STREAK barks ups the aural ante into exciting new territory.

“I feel we’ve taken the band to another level,” explains Richie Kotzen. “The compositions are stronger on this album. I feel more connected lyrically and musically to what I did on this record than on the last one. We’ve widened the musical scope of the band on this record and moved it forward.”

Mike Portnoy continues, “Everything on this album was more of a collaboration than on the first album. There’s just a natural chemistry. The three of us really mesh very, very well, both musically and personally. The mission of this band is to write catchy songs, and not have the musicianship overpower that.”

“I’m glad we’re not playing it safe and just doing songs that automatically fit in the category of what we did on the first record,” Billy Sheehan concludes. “Some of them are a little different, and we definitely took chances. And you have to do that — otherwise, you don’t grow.”

Check out THE WINERY DOGS at any of the following tour stops: