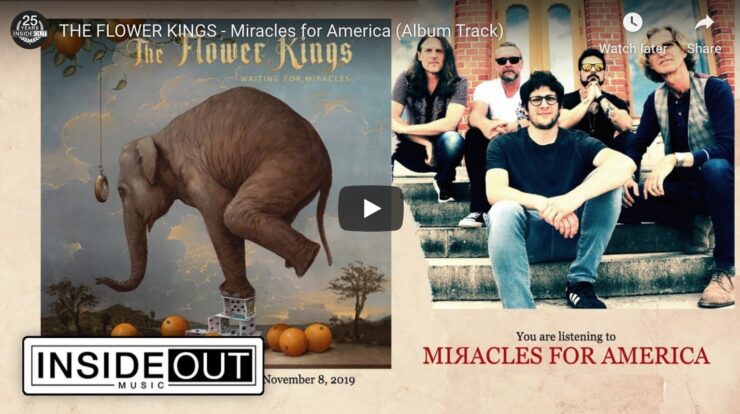 Progressive rock legends THE FLOWER KINGS are pleased to present ‘Miracles For America’, the second track from the group’s much anticipated new studio double-album ‘Waiting For Miracles’, which will be released on InsideOutMusic on November 8th, 2019. The album is comprised of 15 new tracks, recorded over the summer at RMV studio in Stockholm, Sweden – a vintage studio space owned by ABBA star Benny Andersson. Roine Stolt says about the almost 10min long track:

“‘Miracles For America’ was born out of some of my later demo sessions. When I started to work on the musical idea I felt it had some weird tonal and rhythmical connections to “West Side Story” or even “Annie Get Your Gun” – but with prog instrumentations – some of those musicals that had a true American flavor. But at the time I wrote the lyrics we’re already deep into the debate – ‘does the US have the right leadership? – What is happening there!?’

The guys in charge, the ‘big fish’ were swirling around the golden calf ’til they got dizzy. So as I sit in my studio, I cannot disconnect from the world around – the song has to be connected, wired into this NOW – in some ways. Furthermore – as I have told before – most of the lyrics on this disc were immediately recorded – made up in the spirit of the moment – like a conversation with another self.”