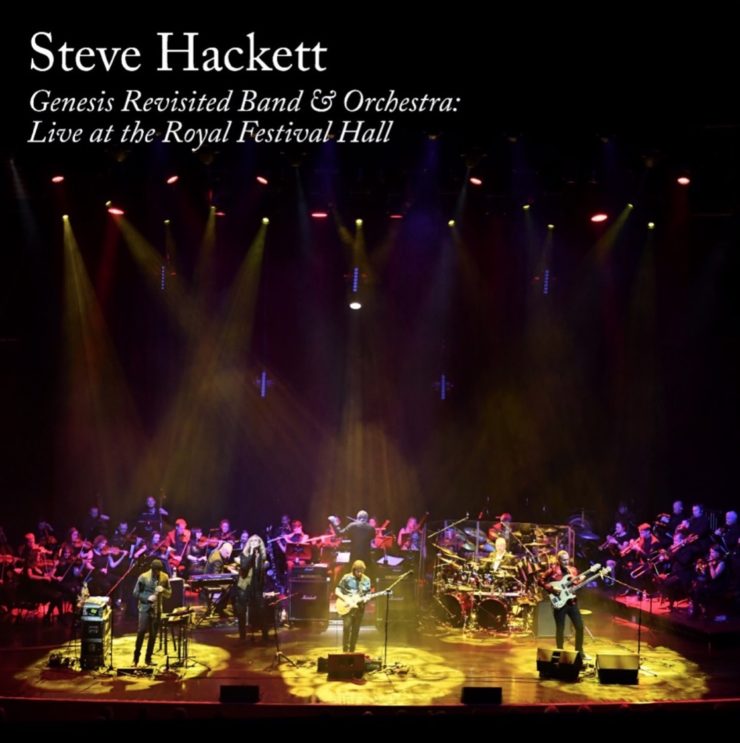 Far from taking the more relaxed approach of many of his Genesis colleagues, Steve Hackett has been the single most active (former) member during the last decade, both in terms of releasing new material, touring and keeping the Genesis legacy alive, starting properly with 2012’s “Genesis Revisited II” album. In that respect it would be easy to look at this latest live release (the 5th in as many years), glance at the track list and simply write it off as: More of the same.

Doing that would mean you would miss what, I don’t think its overstating it to say, could be the ultimate live album in his catalogue. For followers of the band, you don’t need me to tell you how Hackett along with Roger King, Gary O’Toole, Rob Townsend, Jonas Reingold and (the vocalist who can tackle anything!) Nad Sylvan, have proven themselves capable of performing outstanding versions of both the Genesis catalogue and Hackett’s solo catalogue. The jewel in this album’s crown is the combination of that band with a full orchestra. Experience may warn you off – how many times has “plus an orchestra” been simply a bland rehash of the original tracks with little colour or imagination added?

Let me assure you that is not the case here. The addition of the 41 piece Heart of England Orchestra, conducted by Bradley Thachuk and, perhaps more importantly, the incredible arrangements written for these songs, means this is music played in a way you’ve never heard it before.

The album covers classics from Hackett’s earlier solo career (The Steppes, Shadow of the Hierophant), and his more recent releases (Serpentine Song from 2003’s To Watch The Storms, Out of Body from 2015’s Wolflight, and El Niño from 2017’s The Night Siren). Add to that a Genesis set list which includes a track from every album he contributed to (skipping The Lamb) and it’s a true career overview.

Familiarity aside, following the set opener, Dance on a Volcano, with the recent Out of Body is a perfect fit with the middle oboe section of the latter sounding not unlike a Mini Moog in places. The sweeping string arrangements power this track along – you can almost hear the Wow Factor the audience would have experienced as this leads into the 1970s Hackett classic, The Steppes.

The presence of the best sister-in-law singer in rock, Amanda Lehmann means there is a full rendition of The Shadow of the Hierophant. This track, in common with many on the album, has an incredible ending. Far from just replacing a mellotron or a string/ synth, the orchestra add colour and flourish to the tracks, being their own instrument rather than just filling things out, at points taking over from the lead instruments, as happens towards the end of this track – it sounds amazing! Is there a finer song ending than Genesis’ Afterglow?…or Firth of Fifth?… or Dancing with the Moonlit Knight? – well they all sound even better here! And when mentioning all of these, it’s hard to not give credit to singer Nad Sylvan, whose vocal dexterity spans the Genesis eras so well, and who is truly owning each of these classic songs rather than just retreading the steps of the original vocalists – he is comfortable enough to give us his interpretation while not making the long term listener uncomfortable that it may not be note for note the same as what is familiar.

It would be hard for any classic prog fan to dislike the final 40 minutes of this 2 disc set. Starting with Supper’s Ready, in which the strings chirp in the intro section, while cellos swoop and dive… subtle and beautiful. The full force of the orchestra gets unleashed in a dramatic Apocalyse in 9/8 to a breathtaking extent. The closing guitar solo is magnificent, extending what was faded on the original Foxtrot album and letting Hackett unleash his talents. How do you follow that?

Answer: The Musical Box! Seconds Out was my first exposure to a lot of the Gabriel era Genesis tracks (yes I know he’s not on it!) and the closing section of The Musical Box is one of my all time favourite prog moments. It’s hard to envisage a better live version of this track being performed today. Band and vocalist are working as if their lives depended on it, as the strings and brass conjure up a storm behind them. Spectacular!

The danger might be to view this from afar and conclude “just another live album”. This is far from that and scales incredible heights in the quality of its contents. A “must have” for fans of Genesis, Hackett and classic prog.

The full track-listing is: