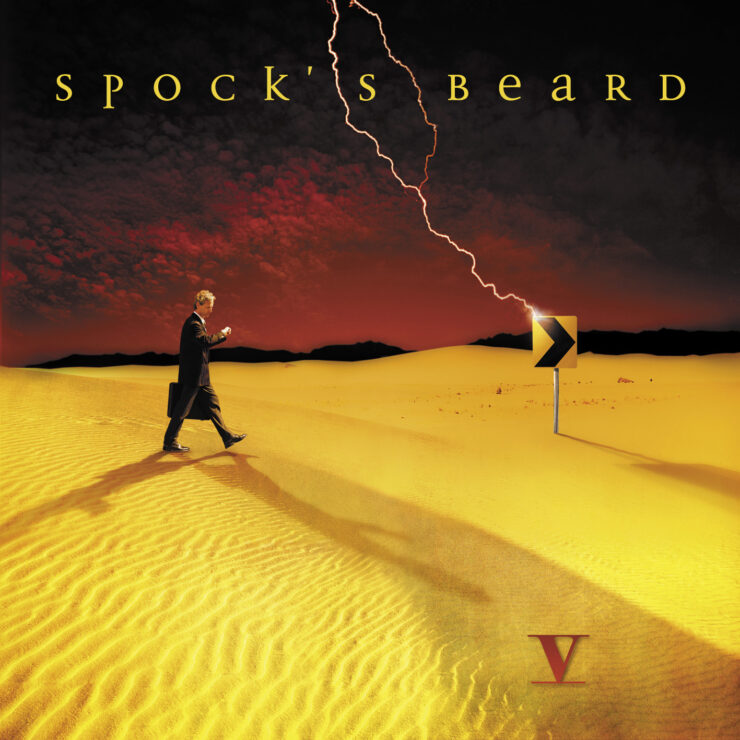 With the release of their first two albums, The Light and Beware of Darkness, Spock’s Beard earned accolades in the prog community for their classic sound and unique writing style. While their third album, The Kindness of Strangers, helped expand their audience, their fourth album, Day for Night, failed to resonate with the hardcore fans. With their fifth album, Spock’s Beard aimed to correct that. Simply titled V, the album successfully bridged the epic nature of their early work with the rock approach of the previous albums.

V is bookended by its two longest songs and two of the group’s finest offerings, the bombastic 16-minute opening track “At the End of the Day” and “The Great Nothing.” “At the End of the Day” opens with a beautifully haunting french horn before melting into a gorgeous orchestral refrain. The song kicks into high gear led by Nick D’Virgilio’s pounding drums. Dave Meros’ pulsating bass line carries the song through until the ultimate grand ending.

“The Great Nothing” travels through six sections with the closing section reprising the opening in typical Morse style. The song is autobiographical for Neal Morse, who wrote the song from the perspective of being a struggling musician, which is what led him to starting Spock’s Beard in the first place. “‘The Great Nothing’ I think I actually wrote in ‘97 and we didn’t record it until ’99, and V didn’t come out until maybe 2000. I wrote from the perspective of a depressed musician being revived by music again.”

In between are four shorter tracks, the hard rocking “Revelation,” a sequel to an older track with “Thoughts Pt.2”, the pop single “All on a Sunday” and requisite balled “Goodbye to Yesterday.” In many ways, V is a Spock’s Beard sampler showcasing the band’s best traits.

For Dave Meros, there are a number of standout tracks: “‘At the End of the Day’ is a very strong piece of music, and besides the strength of the composition itself, there is also a lot of very diverse playing by all of us. Lots of different sounds and styles. We experimented quite a bit and had a lot fun recording that one. I also really love ‘Goodbye to Yesterday,’ it’s a beautiful track.”