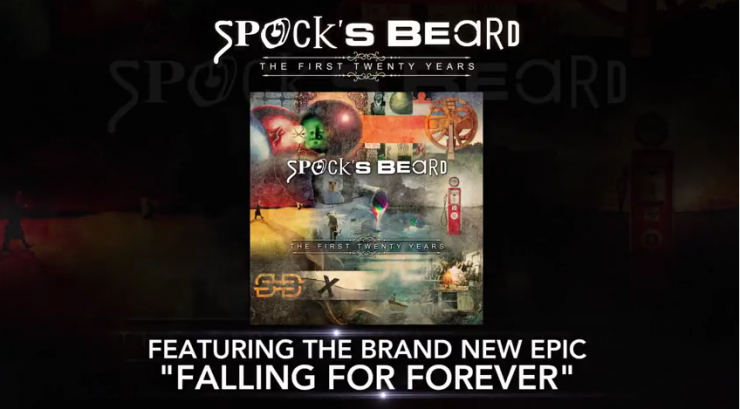 Exclusive preview of the epic new Spock’s Beard track “Falling For Forever” written by Neal Morse and performed by all members of the band.

Spock’s Beard are set to release their first Best Of collection entitled ‘The First Twenty Years.’  The spectacular 2CD/DVD compilation, available on November 20th on Radiant Records, contains some the band’s best tracks from each of their 12 studio albums, including The Light, June, Wind At My Back and much more.    Also featured in the collection is the brand new 19-minute epic track, “Falling For Forever,” written by founding member Neal Morse and performed by all members both past and present.  This incredible track combines all the elements of a classic Spock’s beard track and with vocals from Neal Morse, Nick D’Virgilio and Ted Leonard.  This is going to be one fans will be talking about for a long time.

Now you can check out an exclusive preview of the epic track on The Prog Report:

Dave Meros had this to say about the new track: “We were adamant about not wanting to just release a bunch of our earlier material in a new package, especially to loyal fans who probably own most, if not all of our albums already. With that in mind, Neal came up with the new epic “Falling For Forever” which clocks in at almost 20 minutes and was written specifically to include all current and past members of the band.  Luckily, everyone’s schedule lined up to be able to record it and even better, Rich Mouser was available to record and mix it as well as remaster all of the earlier songs.  Add to that a DVD with a lot of previously unseen video footage from the early days of the band and we think we have a package our fans will really get into.”

The collection bookends a banner year for the band, which saw the release of their 12th studio album ‘The Oblivion Particle.’   Released in August 2015 on InsideOut Music, the album was a successful follow up to the band’s 2013 release “Brief Nocturnes and Dreamless Sleep”, and charted all over the world.