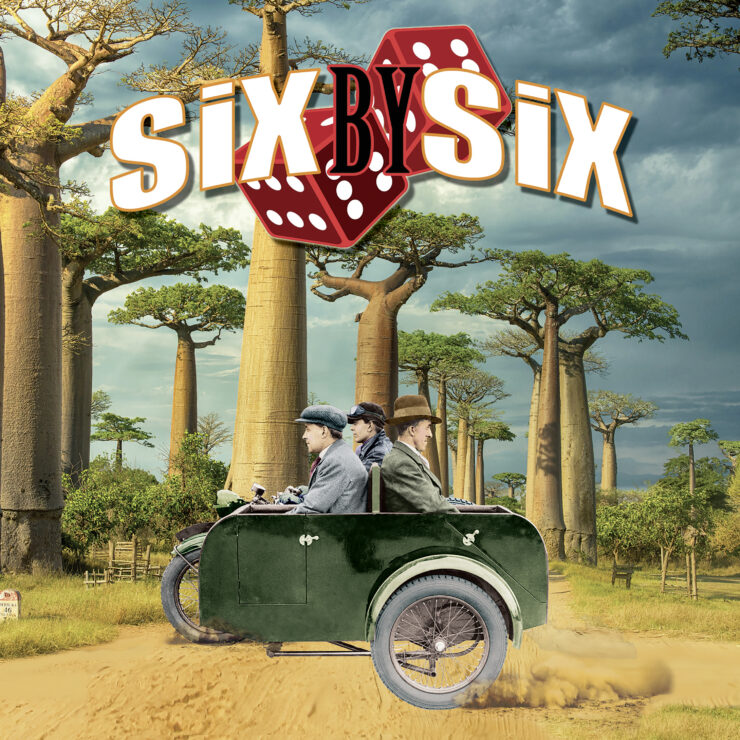 On the debut album from SiX By SiX, frontman Robert Berry reveals a key source of inspiration for the compositions that have led to the accomplished careers of the members that make up the new supergroup: “There’s a sound in the distance, I hear it each night …It’s full of what might drop out of the clouds and land at my feet, And give me answers to what this life could mean.” That reference to divine inspiration from “Battle of a Lifetime” would sound pat and pretentious coming from any number of other artists. But, here it comes across as an intimate and confessional revelation, full of humble gratitude for his and his bandmates remarkable talents, skill and good fortune. SiX By SiX’s debut is indeed an inspired album – a heady 47-minute prog-infused rock joyride, with Berry (known for his work with Keith Emerson and Carl Palmer, Ambrosia, Greg Kihn) joining forces with Saga guitarist Ian Crichton and Saxon drummer Nigel Glockler.

The album opens with “Yearning to Fly,” a funky prog rocker featuring a chunky Crichton guitar riff layered over propulsive Berry bass lines and a heavy drum groove laid down by Glockler. About a minute in, Berry’s muscular vocals kick in, with a lyrical theme that runs throughout the album: “Something inside needs to break free.” The track is both a compelling call to action – “It’s not enough to sit back and watch the world pass by” – and a rousing anthem that grabs you from the get-go and never lets go. The amped-up track sets the tone for what’s to come, perfectly marrying Crichton’s fiery fretwork and Glockler’s concussive percussion with Berry’s vocal calisthenics, melodic bass lines and keyboard fills.

Standout tracks include the explosive political protest song, “China,” the rousing hard-driving heavy metal raveup “Casino” and the power-prog rocker “The Upside of Down.” These and other tracks on the album – notably “Skyfall,” “Save the Night,” “The Upside of Down” and “The Last Words on Earth” – are wisely built around Berry’s commanding vocals and showcase his facility for crafting radio-friendly vocal melodies over the band’s turbulent and chaotic signature sound.

“Battle of a Lifetime,” the album’s centerpiece, encompasses everything this trio does so well – crackerjack songcraft, top-shelf arrangements and virtuosic performances from all three players. The mini epic opens with a lush synth and a spare electric guitar solo that gives way to an introspective 12-string-guitar-and-vocal introduction. From here, the track picks up speed and runs through a suite of head-on prog excursions and side trips. Along the way, Crichton delivers classical guitar flourishes and Berry offers up brilliant Yes-like acoustic-guitar-and-vocal interludes that play like sunlight breaking through stormy clouds.

Meanwhile, “Reason to Feel Calm Again” opens with a shrieking guitar intro that sounds like electrified bagpipes. Over the course of the next eight minutes, the trio races through a succession of instrumental and vocal breaks, with tricky time changes anchored by Glockler and Crichton’s soulful fretwork matching Berry’s theatrical, skyscraping pipes.

A single acoustic ballad, “Live Forever,” rounds out the album, featuring a poignant vocal from Berry over intricate 12-string guitar arpeggios and a sprinkling of choirboy harmonies. Clocking in at well under two minutes, it is the shortest track on the album, but is by no means a throwaway. Berry delivers the most spiritually uplifting line on the album: “In this long sweet goodnight, it isn’t the end…we’ll all meet again.”

On the whole, SiX By SiX sounds more like a band of musicians who’ve been working together for years than a new musical collective – a rare feat for any debut album. It also has a surprising live-in-the-studio feel that crackles with energy and power – suggesting these tracks were designed to be performed live.

Here’s hoping this is just the opening statement from SiX By SiX and that Berry, Crichton and Glockler head back to the studio for a second album and decide to hit the road for a series of live shows.

Also worth noting: SiX By SiX has announced the publication of “The Journey Eternal,” — a graphic novel, as a companion to the new record – due out September 30.

Released on Aug 19th, 2022 on InsideOutMusic