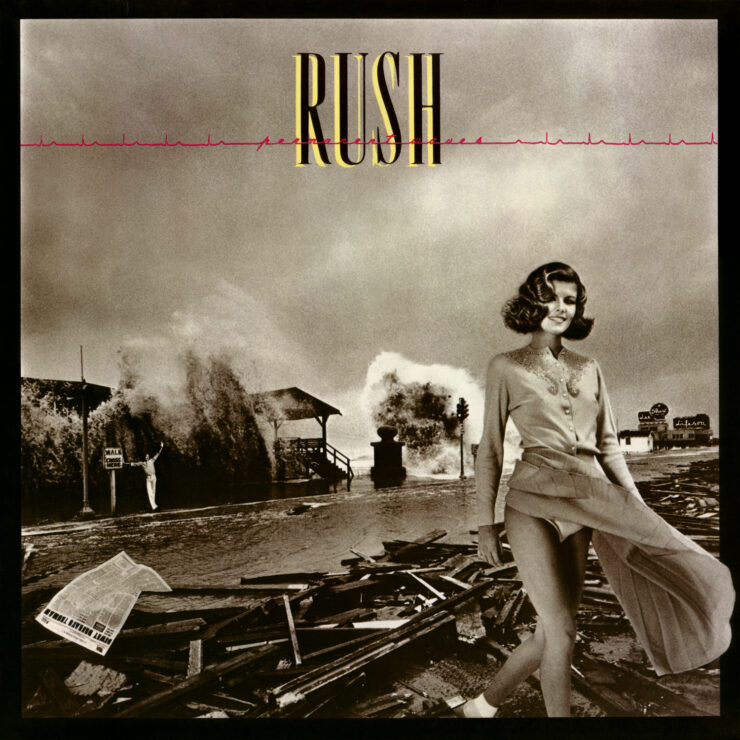 Note: This article was virtually completed before we learned of the passing of Rush drummer Neil Peart. Check out our “The Legacy of Neil Peart” podcast for our reflections on the life and music of this prog legend.

Hard as it might be for some of us to believe, this is the year when 1980s albums start to hit their 40th anniversary! The album that kicked off the 1980s for prog, in many people’s opinion, was Rush’s Permanent Waves. Released on January 14th, 1980, many regard it as their finest album.

The history of most prog bands is one of shifting line ups and the resulting reinvention of the band dynamic. For Rush, the fact that the band members remained the same from July 1974 when Neil Peart joined didn’t mean they were any less inventive and potentially it makes it easier to see their more gradual evolution over the years. In their discography, Permanent Waves is the pivot, or crossroads album between the past and the future. Rush super-fan Mike Portnoy told us: “It was the perfect middle ground between Hemispheres and Moving Pictures.”

With Hemispheres, the band was achieving very strong live attendances, and decided to take a post tour break before regrouping. Whatever affect that had, when they returned to the rehearsal room it was with the intention of a new approach that would be evident both in the music that would appear, and in the lyrics.

Lyrically it was an album that, rather than be focused on stories or concepts, was about relationships: relationships between music, technology and radio (“The Spirit of Radio”), between mankind and its environment (“Jacob’s Ladder,” “Natural Science”) and of course human relationships (“Entre Nous,” “Different Strings”). Across its 36 minutes and 6 tracks, the quality bar is set extremely high. In contemporary interviews the band say how they had gained confidence in their material and writing to the extent that they no longer felt they had to “hide behind” their musical chops, and could instead take a step towards simplicity. Of course that didn’t mean they became a 3 chord 4/4 garage rock band, because on Permanent Waves the musical content and textures were as rich as ever – but they had a focus and economy that the band took further into the 1980s and beyond. To quote producer Terry Brown, the band “had that knack of being able to use time signatures at will, but make them feel seemless”

“The Spirit of Radio,” a song about the challenges the band faced getting airplay for their music, ironically became one of their biggest radio hits and a set list staple / fan favorite. It also contains a glimpse of the future, when the band slip into a reggae closing section – in this new era, new styles and approaches were not off limits. Rather than being a “musical joke”, this was a nod and wink to the current music scene, where the “anyone can be in a band” attitudes of punk rock had shifted to a new wave of musicians whose style was sharp, punchy and ultimately melodic. Rather than being somber and self important, the band’s levity was shown in the corruption of Paul Simon’s “the words of the prophets…” lyric, which was followed by the audience cheers gag after the “concert hall” line – in the live arena this became a key audience response moment.

In the intervening years, “Freewill” has achieved a fan favorite status almost on a par with Spirit. The band tried an early version of it, and “The Spirit of Radio,” in concert several times in 1979 before recording the album. Peart’s lyrics, about freedom of choice are certainly quite philosophical, but they don’t make the song inaccessible. In terms of the musical composition it features an incredible, speeding guitar solo from Lifeson, Peart commanding a variety of time signatures but delivered in a way that serves the song and its dynamic rather than being a “showing off” exercise, and Lee reaches for the very top of his vocal range, almost bidding farewell to that style of singing which he wouldn’t return to.

Meteorology isn’t a typical prog rock subject matter, but “Jacob’s Ladder” is a musical and lyrical representation of the phenomena of sunlight breaking through storm clouds. Interestingly the lyrics were added last, with the band conjuring the musical soundscape that represented the storm: the ascending arpeggios, the battle drums symbolizing the storm etc.

“Entre Nous” is said to be about the band / audience relationship, but the words could equally be applied to any human relationship. Despite being a single, it had to wait 27 years for its live debut on the Snakes and Ladders tour. The other human relationships song, “Different Strings” is a more acoustic number, featuring cover artist Hugh Syme on piano, and it features the final Geddy Lee lyric on a Rush album – henceforth the lyrics were exclusively Neil Peart’s area!

The closing epic, “Natural Science,” came after a period of writer’s block for Peart which lasted for several days. Some of the musical sections, from a track discarded early in the writing sessions, the epic Sir Gawain and the Green Knight, were joined to fresh ideas or spontaneous moments, to form a three part epic. Having taken a further step towards using enhanced music technology, the song’s theme is about how technology can obscure our view or block our appreciation of nature – it’s a 40 year old message but one that we still need reminded of today!

Originally due to be called Waveforms, with images of the band’s electro cardiogram lines on the cover, the album title was modified into a comment on the pointlessness of genre labels. With New Wave, Old Wave and who-knows-what-else Wave, the revised title brought attention back to the fact that it’s all music! When not playing the piano, artist Hugh Syme was coming up with the cover, which, wave puns aside, wasn’t without its share of controversy. Coca-Cola asked for their logo to be removed, seemingly disliking its location on the cover, and the Chicago Tribune also wasn’t happy! The striking modern image reflects the content of the album, combining simplicity with depth of meaning. The model, with her wavy hair, walking out of tidal wave seemingly unharmed can perhaps be interpreted as the band, emerging from the tsunami of new wave, upright and proud.

“I think (Permanent Waves) is the band’s most complete statement, and the most enjoyable artistic moment in their career for my personal taste. You had songs like “Jacob’s Ladder” and “Natural Science,” which incorporated these really prog elements, but it also was a foreshadowing to the more polished sound that would come with Moving Pictures.

“It really is a perfect album from start to finish – it’s literally six perfect songs.

“I always loved that it was really the album that kicked off the 80s. It’s my favorite Rush album – you know, I love everything they put out all those years in the 70s and 80s, but Permanent Waves is the one that holds a really special place in my heart.”

We hope you enjoy revisiting the album on this significant anniversary. Please share your memories, thoughts and opinions on Permanent Waves with us.