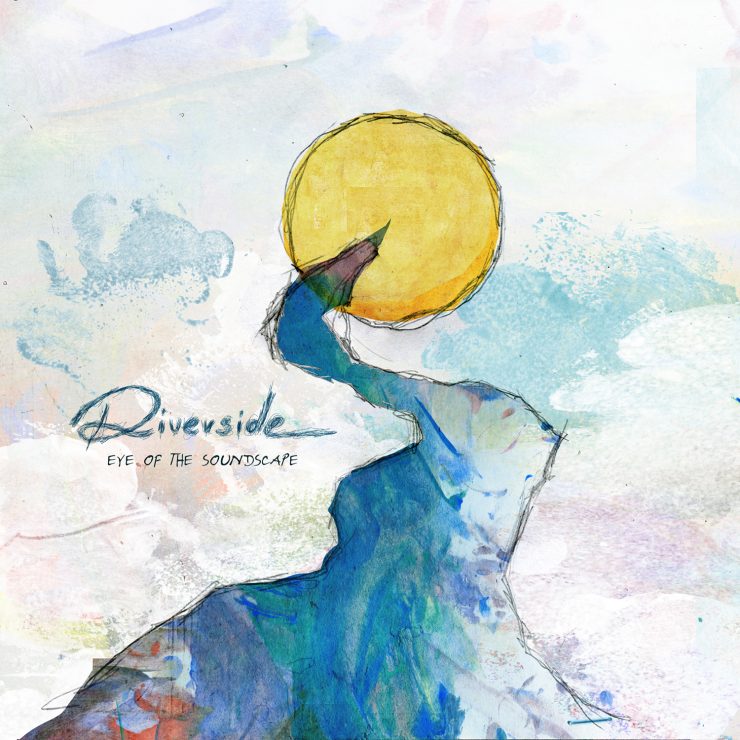 Review of the new album by Riverside – Eye of the Soundscape

‘Eye of the Soundscape’ is a unique album. It’s unique within the Riverside catalogue; while the sounds here are not completely out of left field for the band, instrumental electronic ambient music has not been Riverside’s hallmark, either. The album also occupies a unique place within music history, arriving as a transitional album that was actually planned as such.  The death of guitarist Piotr Grudziński adds weight and sadness to the album’s release, but the presentation of the music was conceived and carried through by the full band. So it’s a tribute album of sorts, albeit one that did not have to be cobbled together after the loss of a band member.

Really, though, the only context needed here is the setting of appropriate expectations: yes, this is an ambient electronic album. There are lots of guitar parts but few riffs or solos; keys galore but more atmospheric texture than proggy pomp; prominent drums and bass but largely foregoing a standard rhythm section in favor of layered percussion and cyclical grooving. If that sounds like your thing, you’ll like this album. If it doesn’t…well, this might be the album that changes your mind.

The four new songs comprise an LP’s worth of music on their own, but are worked into the track listing alongside previously released bonus material, to good effect. “Where the River Flows” is an excellent opener featuring atmospheric synths and sinister flourishes fit for a cinematic thriller. These moods give way to metallic percussion, spaghetti-western guitar, and eventually to some rounding moog-y keys and vocal loops. The progression foreshadows many of the sounds and structures to come, though not as an overture or template. Likewise, the title track ends the proceedings on a subdued, exploratory note. “Eye of the Soundscape” embodies the spirit of the whole album in its patient unfolding that in turn calls for patient attention from its listeners.

Among the previously released tracks, “Night Session- Part Two” is a standout that sounds very much like something David Gilmour and Richard Wright would have come up with during rehearsals for the On An Island album. The Dick Parry-esque saxophone featured throughout adds to this vibe. “Rainbow Trip (2016 Mix),” previously released only as a single in Poland, further diversifies the music while maintaining a unified, atmospheric mood with its album-mates. Restrained kit-work and mixed-forward grooving bass carry the music ahead while dancey synths and vocal loops play above; this all sets up one of the few ‘true’ guitar solos on the album, which is rather Gilmour-inspired in its use of tone and delay. And veering ever-so-slightly again in another direction, the band explores a kind of ambient world music vibe on “Aether” with its snare reverb, electronic percussion, and sinuous bass.

File ‘Eye of the Soundscape’ under “music for a quiet, contemplative evening.” It’s not the kind of ambient album that you put on while you sleep—there’s too much energy, noise, and a few sinister shadows for that—but neither is it loud or beat-driven enough to get much attention from the ‘house’ electronic scene. It feels like a dark, quiet, cold, wintry night—the kind where the dark and the quiet and the cold and wintriness of it all are as heavy and meaningful as the quilt around your shoulders and the book on your lap as you read by firelight deep into the early morning. It suits a particular mood and setting, but it fits that mood and setting to a T. For fans of the band Riverside, this album takes what might have been overlooked as bonus material and works it into a cohesive structure that deepens the band’s catalogue. For fans of progressive music, it diversifies the genre’s offerings and serves as a gentler alternative to the bombardment of 70’s classic rock and 90’s metal influenced sounds. Cozy up, tune in, chill out. Enjoy.