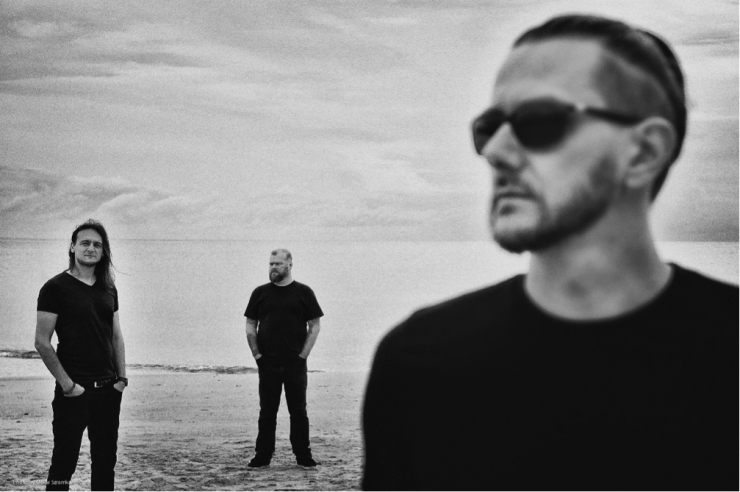 The band make their decision on the future of the band.

Polish prog masters RIVERSIDE have released a statement regarding the future of the band and you can find the full text below:

We’d like to thank you again for your friendship and support throughout this most tragic time for us and we’d like to officially announce that we have made a decision about our future.

We have decided that we are not going to do a casting for a new guitarist. Thus we have ceased to be a quartet and have become a trio. In this line-up we will prepare our new studio album. Both in the recording studio and on tour – if we get back to touring – we will be playing with session guitarists, who are our friends, whom we know and like. But the line-up of Riverside will be as shown in the picture.

Yes, we do realise that this is not going to be the same band. We know that for many of you the story of Riverside ends here, this year, and that “Eye of the Soundscape” might be the last Riverside album you’ll buy. We know that some of you can’t imagine this band without the characteristic guitar of Piotr Grudziński and for you Riverside has ceased to exist. But our story is not over yet; with a flaw, with a scar, with a wealth of new experiences, we have decided to go on.

We know stories of many bands that have survived and have been successful, in spite of all. And we want to be the living proof that giving up is not an option and that we can be an inspiration for others, too. For as long as we can, we’ll continue to do our best to create and meet with you wherever the emotions are running high. Grudzień will still be with us. We are definitely not going to forget him. He’s a part of our lives. But in order for the memory of him to survive, we have to continue. And we want to. So we’re embarking on another journey and we are thankful to everyone who will join us.

Our plans for the nearest future?
Next year we’re going to start working on a new album. Marked by the circumstances, it will probably be a return to heavier and more intense sound. But before that, in February 2017, on the anniversary of Piotr’s death, we’d like to play our first gig. A very special gig which will be an exceptional event. We’d like to play it with guests, with friends, for Piotr, for us. And for you. We’d like our music to be the hero of that day, we’d like to let it speak for itself. We’ll give you more details about it in the coming weeks.

The river will never be the same again but it doesn’t mean it has to stop flowing.

The band is also preparing to release their latest album, an instrumental compilation called , “Eye Of The Soundscape” on Oct 21st.  The release features cover artwork by Travis Smith and includes 13 experimental and highly atmospheric compositions, which showcase RIVERSIDE’s ambient electronic side.

“Eye Of The Soundscape” compiles all the special instrumental RIVERSIDE tracks previously used as bonus material for the “Shrine Of New Generation Slaves” and “Love, Fear And The Time Machine” albums, alongside rare cuts as well as 4 new songs (“Where The River Flows”, “Shine”, “Sleepwalkers” and “Eye Of The Soundscape”) into a massive playing time of +100 minutes, which will be available as 2CD-Mediabook, 3LP (With both CD’s as bonus and an etching on Side F!) or Digital Download.