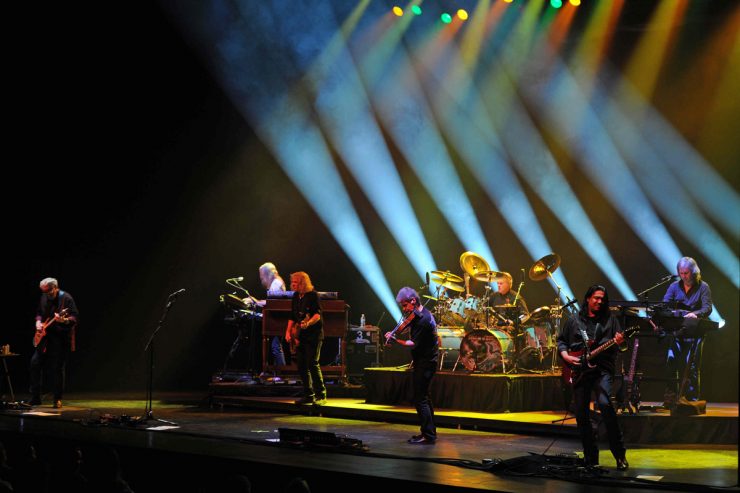 A ranking of Kansas live albums.

2020 was an awful year. There are so many reasons as to why this was, but the most relevant to today’s topic has to do with live concerts. The pandemic effectively killed the touring industry. People couldn’t go out and see shows, bands were forced to lounge around at home, and numerous event workers went without jobs and faced financial hardship because of this. Considering all of this, it would seem that any year would look great in comparison to 2020. With the rollout of the coronavirus vaccine, there’s a glimmer of hope that concerts will return this year, yet there’s still a great deal of unease and unpredictability to be had. Perhaps because of this, Kansas has decided to make up for the combined loss of last year and uncertainty of this year with the release of Point of Know Return: Live and Beyond which was recorded during the Point of Know Return 45th anniversary tour back in 2019. Set to be released on May 28, the album will be the band’s first live release with keyboardist Tom Brislin, and their seventh official live release. In honor of this occasion, we thought it’d be appropriate to take a look back at the band’s previous live albums and rank them. 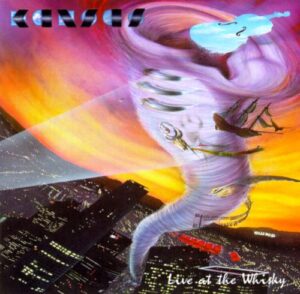 Hot take, this album isn’t as bad as people say it is. Yes, Steve Walsh’s voice is less than stellar, but the rest of the performances are great. Billy Greer’s bass work is tight, David Ragsdale is clearly playing his heart out on the violin, Phil Ehart’s drum patterns are as intricate as ever, and Rich Williams gets to shine like never before as the lone guitarist on stage. For proof of this last point, look no further than “Point of Know Return.” It differs from the studio version in that the composition features a guitar solo during the final stretch of the song, and it’s this melodic thing of beauty that feels both impromptu yet meticulously orchestrated. Essentially, what prog rock should be.

Perhaps the best thing about the album is the mix. There’s a clarity to the proceedings that allows for all the instruments to be heard. Whether this sound was doctored in the studio or was truly this good at the concert doesn’t matter too much. It’s the finished product that counts. With all that said, this is still an album mired by the great Steve Walsh at one of his lowest points, thus the reason it lands so low on this list. 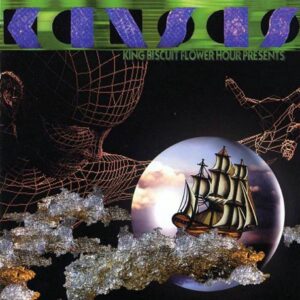 There’s nothing inherently wrong with this live release. It features solid production values, strong performances, and a decent setlist. Combine all this with the glimpse the album gives into the short lived, late 80s line up featuring guitar virtuoso Steve Morse, and you’d think this would be special. Except, it isn’t. And the reason why seems to stem from the run time. At only 65 minutes of music, this is the shortest live album from Kansas’s discography. Brevity isn’t exactly an issue in and of itself, but the effects stemming from the short run time are somewhat damning for this album. Instead of offering a full taste of what the Morse era sounded like live, we only get a small sampling of late 80s Kansas material haphazardly mixed in with tried-and-true concert staples. It results for occasional stylistic clashes, and a wish to listen to more cohesive live packages. Still, this isn’t a bad record – there’s always something worth listening to when Steve Morse is shredding it on the guitar – but it does leave you wanting more. 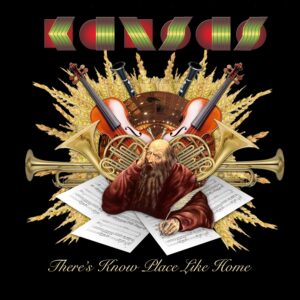 This release should have been special. Instead of a standard live show, you have Kansas performing with the Washburn University Symphony Orchestra. Not only that, but you also have guest appearances from Kerry Livgren and Steve Morse on multiple songs. They even take time to switch away from the guitar to tackle different instruments! Livgren plays the pipe organ on “The Wall” while Morse gets to mess around with the “rhythm” violin part on “Dust in the Wind.” What’s more, we get some deep cuts that aren’t present on any other live album. “Musicatto,” “Ghosts/Rainmaker,” “On the Other Side,” and “Nobody’s Home” are all unique to this release, and they’re easily the best tracks because of this.

Despite all of this, the band’s overall performance comes across as constrained. All the aforementioned elements that make the album distinct from other live albums are appreciated, but they mask the fact that for much of this album, the band are coasting through the set. The sense of vitality needed to make songs like “Belexes” work is sadly lacking, and only manifests itself fully on those tracks which feature Livgren and Morse. Still, the various elements that make this stand out from the band’s other live albums are enough to land There’s Know Place Like Home towards the middle of this list. 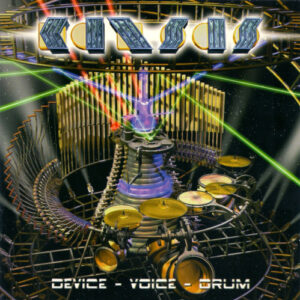 A sufficient release from the early 2000s, Device – Voice – Drum sees the band playing the hits and doing it well. Steve’s voice isn’t in the finest shape, but it’s generally better than on Live at the Whisky. As per the rest of the band, they’re playing is solid as usual, with the best performance probably coming from Robby Steinhardt. His violin work is a treasure, and it’s nice to hear his dark, husky tenor on cuts like “Sweet Child of Innocence.” The contrast between Walsh and Steinhardt is what made Kansas so special, and this album shows that even 28 years into their career, the two complement each other excellently.

If there’s anything that holds this album back, it’s the setlist. It’s not bad, but it’s the same as pretty much every other live album from the band with the only distinct choices being the aforementioned “Sweet Child of Innocence” along with the stomping “The Preacher” and elegant “Distant Vision.” Still, this is a more than worthwhile listen from a band just past the middle stage of their career. 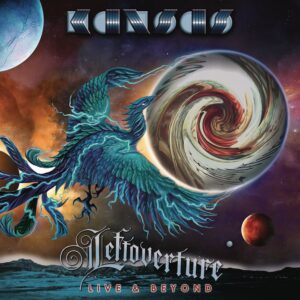 Ronnie Platt’s first live album with the band, this one offers an excellent snapshot into the third most recent iteration of Kansas. The performances are tight as ever, and Ronnie Platt’s energy is infectious. He breathes new life into songs we’re all familiar with such as “Icarus” and “Miracles Out of Nowhere.” Despite being concert staples that have been done to death at this point, the songs sound rather fresh with Platt behind the microphone. Where he shines however is on the more obscure tracks such as “What’s On Mind” or “The Voyage of Eight-Eighteen.” It’s on these songs that he’s able to play around with the vocal melody, and milk new meaning out of the lyrics. Not everything clicks, but it’s nice to hear a singer take risks rather than coast on the boring and familiar.

On the topic of Ronnie Platt’s vocal performance, I feel I should mention the way the album is mixed. It’s the one major issue with this stellar set of songs. While relatively true to the actual sound of the concerts these songs were recorded at, there are times when it’s clear that the vocals have been touched up in the studio. Now, there’s nothing inherently wrong with cleaning up live audio in the studio, bands do it all the time. No, the problem with the vocals is that they sound too touched up.  Additionally, there’s Phil Ehart’s drums which seem louder than every other instrument combined and tend to bury the rest of the performances. This is unfortunate because of how on point the band is. They’ve been around for almost 50 years, and the fact that they continue to play with such a high level of technique and professionalism is a testament to how great of a band they are. What’s more, Leftoverture: Live and Beyond is (arguably) the most invigorating live release since Two For the Show and might have even rivaled that pillar of excellence, had more care been given during the recording and mixing of this project. 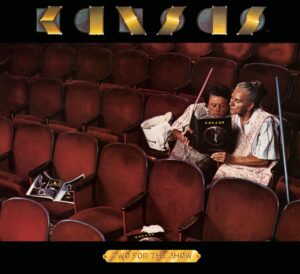 Whether it be the original double album on vinyl or the expanded CD release, this remains the best Kansas live record. We get representation from all five of the band’s studio albums up to this point, expanded song arrangements, solo spots, and the possibly the most rip-roaring cover song in rock history. No filler, no gimmicks, just two and a half hours of classic prog. If there’s one thing to nitpick, it might be the mix. For those whose ears are more attuned with today’s music, this album might sound a touch thin – especially in comparison to the rich production of Kansas’s studio albums – but there’s still a full sound to the proceedings. This is primarily thanks to bassist Dave Hope, whose thick bass tone really adds to the sonic depth of these performances. By far the most under-appreciated member of the band’s original line up.

Speaking of the original line up, let’s talk about the rest of the band. They’re phenomenal! Phil Ehart’s drum work is meticulous and dexterous, the twin guitar attack of Rich Williams and Kerry Livgren is crackling (especially during the improv musical conversation before “Child of Innocence), Robby Steinhardt’s violin playing is dynamic (just listen to the emotive lyricism towards the end of the “Lamplight Symphony” excerpt, the stately figures in “Cheyenne Anthem, and the nimble, intricate shredding on display throughout “Bringing It Back”), and Steve Walsh absolutely nails it out of the park with his vocals. There’s no strain on his angelic tenor, thus allowing him to sing his heart out on songs like “Song for America,” “Lonely Wind,” and “The Wall” while somehow still finding the energy to dance around on the Hammond organ as well as several other synth instruments and the vibraphone. Combine all these extraordinary individual performances with how in sync the band are with each other, and it’s safe to say that this is Kansas at the peak of their performing abilities.