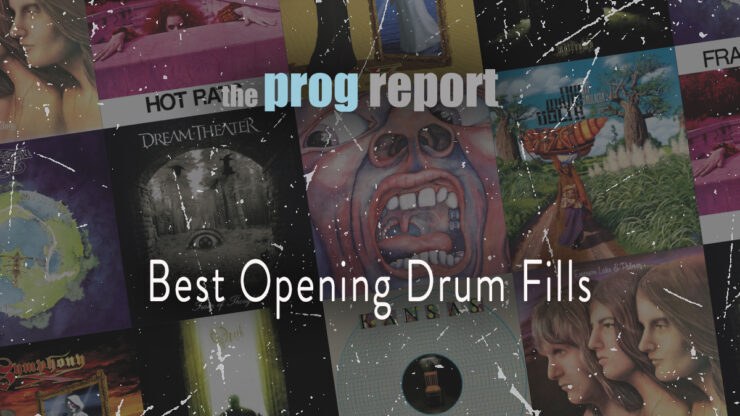 What is a drum fill? There are a multitude of definitions that one will find across the internet and on discussion forums, but at the end of the day, it all boils down to a gut feeling. You know what a drum fill is when you hear one. It’s the technical sprinkling atop an already established groove, a short spot for the drum to let out a rapid-fire burst of notes, a break from the metronomic beat. It’s everything and anything a drummer can do to shine a light on themselves, and nowhere is this better seen than in the opening fill.

Something of a rare feat, the opening drum fill can be the perfect way to grab a listener’s attention given how vastly different it is from a guitar riff, opening chord, or even a basic beat. Yet, there’s also so much more room for the opening fill to feel separate from the rest of the composition given that it can’t rely on an established rhythm. It has to come forth from out of nowhere, and this spontaneity has led many drummers to not even consider, let alone dare to start off a song with a fill. Nevertheless, some have tried, and in the world of prog – with its looser regulations on song structure – there are many drummers who have succeeded in starting a track with some flash. So, in honor of those who bravely dare to kick off a song with a spotlight on the skins, we’ve decided to highlight 10 of the best opening drum fills from the prog-rock/prog-metal genre.

10. “In the Court of the Crimson King” – King Crimson
Admittedly more of a count off than a proper fill, “In the Court of the Crimson King” nevertheless lands on this because of how effectively it introduces the listener to the composition. It’s a reserved, lyrical entrance that points to the stately character of the piece and lets you know what’s in store for the next 9 minutes (of which includes more traditional drum fills from Michael Giles).

9. “Porcelain Heart” – Opeth
Opeth are a curious case of a band in that the only member people ever really talk about is Mikael Akerfeldt. This is an understandable phenomenon given that Akerfeldt is the man steering the ship, but it often leaves people like drummer Martin Axenrot out of the spotlight. On “Porcelain Heart” however, there’s no erasing the Swedish drummer’s contributions. He might not be the flashiest player on the planet, but his tasteful introduction and the subsequent rhythm he lays down (interspersed with more snare-led drum fills) are what drive this monster of a song and give it such a thunderous presence.

8. “The Sheriff” – Emerson, Lake & Palmer
From one of prog’s finest drummers, “The Sheriff” sees Carl Palmer use his drums to recreate the scene of someone knocking at someone’s door and being let in. And then from there it’s just Carl Palmer dancing his way around the kit, before the rest of the band kicks in, but the fact that he starts his solo with an image makes this intro stand out. That, and the fact that it’s Carl Palmer.

7. “A Fool’s Paradise” – Symphony X
If we want to be super technical about this song, we’d disqualify it from the list because it starts with a half-second worth of Michael Romeo’s chromatic guitar runs, but considering these runs carry over from the previous track on V, we let it slide. *sigh* Having gotten that out of the way, let’s talk about those drums. They hit you like a machine gun, and the ferocity that Jason Rullo imbues in those first two seconds of the composition is just the right kick to the get this metallic song going.

6. “Play On” – Kansas
From the fairly pop-oriented Vinyl Confessions album, this intro sees Phil Ehart use the majority of his drum kit to propel the song into existence. Sure, you could start with the arpeggiated synth riff, but it wouldn’t have quite the same punch as Ehart’s pounding intro. It makes the song sound livelier than it actually appears to be (which says a lot considering the quick tempo). Most importantly, however, Ehart’s intro reinforces the ideal of the drum fill being both flashy and purposeful.