Prog Report Playlist – An introduction to It Bites 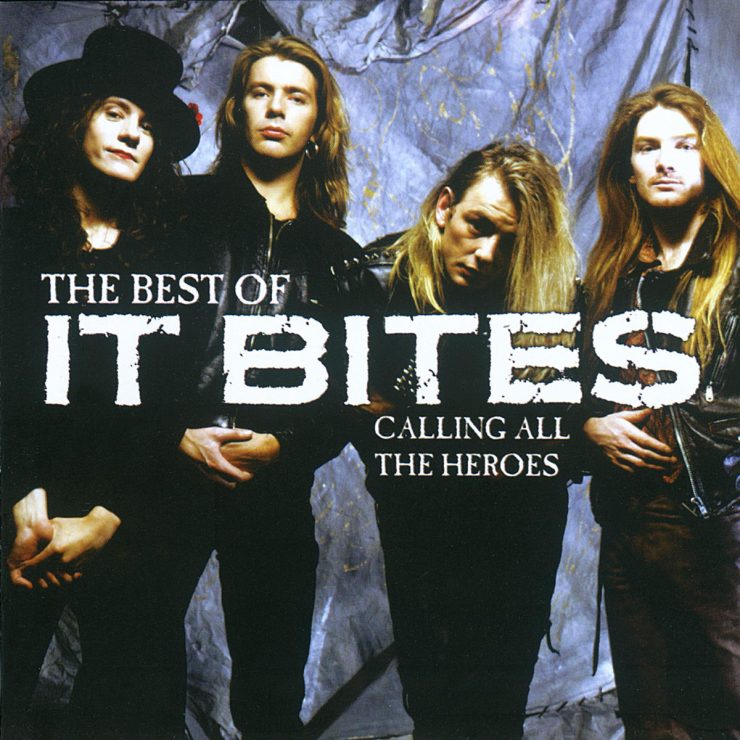 An introduction to the band It Bites with a look at some of their best songs.

With one massive chart hit in the 80’s, Cumbria’s It Bites were incorrectly considered by many to be a pop band. Although it had an intensely catchy hook, the song in question, “Calling All The Heroes” may have been poppy, but it was, like all It Bites’ music, Prog in disguise. That is because It Bites were masters at inserting dizzying time signatures and proggy twists and turns into their music in the most subtle way. Only the Prog cognoscenti realized that It Bites was in fact that most elusive thing even for virtuoso musicians to achieve: a band that played unbelievably difficult music, while hiding that very fact behind pop hooks. But Prog they were. Formed by now legendary guitarist/vocalist Francis Dunnery (of Robert Plant fame), drummer Bob Dalton and bassist Dick Nolan, they were shortly thereafter joined by keyboardist John Beck (later to play with Fish), and the chemistry was palpable. Jaw-dropping arrangements, enormous instrumental sound, fat harmonies and unprecedented compositional chops were the band’s hallmarks.

First album, 1986’s “The Big Lad In the Windmill” was rock-solid and showed early signs of the quirky Progginess that was to become the band’s trademark. The aforementioned hit song appeared on this album. Second album “Once Around the World” showed them deliver even more complex music, again very often hidden behind a straight-ahead rock sound that was nothing if not deceptive. The Proggy side of the band was more overtly exposed on the second part of this album, which contained the epic fourteen minute title track. Third studio album, “Eat Me In St Louis” (the band’s last with Dunnery, released in 1989), was a polished and varied album that showed this great band’s true Prog credentials with more emotional moments than the band had revealed in the past.

The band then took a seventeen-year hiatus before reforming in 2006 with John Mitchell (Arena and Frost*) taking Dunnery’s place. This was a fascinating development from the fans’ perspective, because Dunnery was widely regarded as being irreplaceable, yet the highly respected Mitchell cited It Bites as being his favourite band growing up. The challenge was set for Mitchell to continue It Bites’ unique combination of Prog, producer-glossed pop-rock and Allan Holdsworth-style guitar solos, while placing his own stamp on the band.

This he did, with one of the band’s very finest albums, 2008’s “The Tall Ships”. The album unfailingly delivers the sound that beleaguered and patient It Bites fans thought had been lost forever. The band’s last album, 2012’s “Map of the Past” was more Mitchell and less Dunnery, but is a great Prog album nonetheless.

It Bites still enjoy a massive following in the UK, and appear to be on hiatus again, while Mitchell is busy with other projects. In the meantime, this excellent band is well worth checking out. We at Prog report have chosen a list of It Bites’ best Prog songs, to assist readers that may be unfamiliar with the band, get acquainted:

10) “All in Red” is possibly the best song on debut album “The Big Lad In The Windmill”. Big, complex and powerful, the song is a good example of the Proggy path that the band would soon follow.

9) The title track of the second album “Once Around the World” takes some listening, at almost fifteen minutes, but is possibly It Bites’ most definitive statement of Prog intent.

8) “Yellow Christian”, also off the second album, shows off the band’s unique ability to combine impossible Prog arrangements with smooth melodies and harmonies. It is a magnificent song with an unreal arrangement – true mastery of parallel musical universes.

7) “Map of the Past” the title track off the band’s 2012 album, is a beautiful exposition of the band’s ability to hide its Prog tendencies behind what initially appears to be melodic pop. Filled with percussive stops and starts by Dalton, the punctuation belies the smooth and easy melody that sits at the surface of the song.

6) Back to the second album. “Old Man and the Angel” once again deceives with a complex 7/8 arrangement that will sound, to the uninitiated, like a simple ‘80’s pop-rock melody. It is anything but. Covered in rich harmonies, the instrumentation underlying the melody is hugely complex.

5) “Oh My God” is the opening song on “The Tall Ships”. Beginning with what seems like nothing more than a good a capella harmony, the syncopated nature of the instrumentation soon reveals that Mitchell fully intends to carry on Dunnery’s fine tradition. It’s pop. But it’s prog. And it’s great.

4) “The Wind that Shakes the Barley” is definitive It Bites. Although it was recorded in Mitchell’s era (also on “The Tall Ships”), it is as good as any Dunnery song and will truly move any Prog fan. With trademark Dalton off-beats, massive guitar progressions and tear-inducing Beck melodies, one must believe that Dunnery himself would have been proud of this track.

3) The ballad “Still Too Young to Remember” is certainly not close to being It Bites’ proggiest track, but it deserves a place on this list due to its stunning guitar work and brilliant melody. Simple but stunning.

2) “The Ice Melts Into Water” from the same album is without doubt one of the saddest and most beautiful songs you will ever hear. It tells the heartbreaking story of a father mourning his little girl whose life has been lost. If this melody and these lyrics do not genuinely move you to tears, then no music will.

1) “Underneath Your Pillow” is one of the best songs recorded in the 1980’s. Off the band’s last album with Dunnery, the song comprises one of the fattest drum beats you will ever hear, and a hook filled with glorious harmonies. To be honest it is not the band’s Proggiest moment, in fact far from it, but it is just so very fulfilling that it may as well be.

So if you have not yet heard It Bites, I encourage you to give them a listen, and I hope the above list makes it easier for you to do so. Here’s hoping the extremely busy Mr Mitchell delivers at least one more album with this great band.