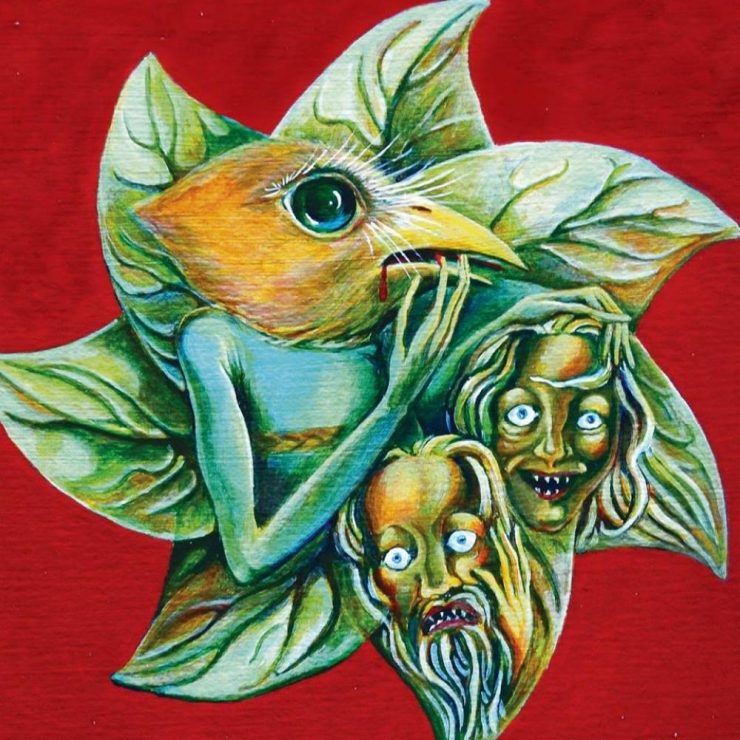 Arguably no other progressive rock creation in recent years has been shrouded in as much mystery and expectation as Infernal, the latest studio effort from Phideaux. After all, it follows what many fans (myself included) consider to be three of the best genre albums of all time: 2007’s Doomsday Afternoon, 2009’s Number Seven, and 2011’s Snowtorch. (Of course, the prior collections were great as well and paved the way for such distinction.) As such, devotees have spent the last seven years—if not eleven since Infernal concludes the Great Leap/Doomsday Afternoon set—speculating and anticipating how exceptionally it’ll tie into the trilogy, maintain the idiosyncratic brilliance of its predecessors, and rank as one of the top works of its release year.

So, was it worth the wait?

Well, that depends on what you expect. Upon initial listens, those hoping for a consistent continuation of the aforementioned trio’s robust eccentric intricacy may find it a bit wanting; sure, that side of Phideaux certainly crops up from time to time within its ninety-minute duration (especially during the second half), but Infernal is deceptively unvaried and reductive at first glance since it appears to prioritize straightforward songwriting and lush yet modest arrangements. However, a deeper analysis and appreciation reveals how resourcefully Infernal actually does two things at once: touch upon the styles and stories of its two narrative precursors while also establishing an almost brand-new approach entirely. Thus, the double LP is markedly different from—yet equivalent to—the extraordinary achievements that came before it.

Just as The Great Leap and Doomsday Afternoon were different kinds of albums, so too is Infernal (despite featuring the complete Doomsday Afternoon line-up). In fact, during our last correspondence, Phideaux confirmed my conclusion that the first and second discs are meant to channel the first and second entries in the trilogy, respectively, as it simultaneously feels more theatrical (“like a play”) than either of them. Perhaps, then, it’s best to think of Infernal as the BE (Pain of Salvation) or The Lamb Lies Down on Broadway (Genesis) of the band’s discography, as it extends out of its predecessors in the midst of existing as a singular experiment unlike anything else in their catalog.

Although the first half of the undertaking captures the more accessible rock nature of The Great Leap overall, it’s still filled with multilayered splendor and a fair amount of complexity. Opener “Cast Out and Cold,” for instance, is a tour-de-force that builds ominously (with effects and harmonies) before instantly evoking the classic Phideaux charm with its blend of male/female lamentations and pastoral instrumentation. In doing so, it sets a great stage on which to introduce the more multifaceted, urgent, and dynamic “The Error Lives On”. Later, “We Only Have Eyes for You” is relatively bouncy and playful (despite being foreboding beneath the surface), whereas “C99” is a venture into sinister surrealism and “Tumbleweed” uses the trademark piano ballad as a poignant cliffhanger. Again, these songs in particular may seem too similar to each other originally, but they eventually become truly essential components in making the record flow like a unified performance filled with captivating melodies, lively textures, poetic lyricism, and entrancing structures.

The concluding portion of Infernal absolutely channels Doomsday Afternoon in its heighted emphasis on flamboyant intricacy. This is clear from the start, with “The Order of Protection (One)” contrasting its introductory choral serenity with a latter helping of dissonant tones over mesmerizingly mischievous piano motifs (that—no surprise—are reimagined brilliantly in “The Order of Protection (Two)”). Elsewhere, “In Dissonance We Play” finds a strong balance between solid songwriting and musical showmanship, “The Sleepers Wake” is tenderly enchanting, and “Endgame – An End” wraps things up in a mildly foreseeable yet entirely fitting and satisfying way. Without question, though, the standout track of the whole journey is “From Hydrogen to Love,” a fourteen-minute masterpiece that serves as the “Microdeath Softstar” of Infernal (in more ways than one and I’ll leave it at that).

At the risk of spoiling any more of the LP’s magic (hence why the breakdowns of each disc barely scratched their surfaces), suffice it to say that arguably the chief feats of Infernal are its abundant allusions to past sequences and its refreshing theatricality. Not only does it offer plenty of links—both subtle and overt—to itself, Doomsday Afternoon, and The Great Leap as it develops, but it even throws a nod or two at another full-length triumph (whose identity is then made obvious via a clever anagram). Every one of these connections will delight devotees, as will the brief scattered respites that basically act like soliloquys/monologues/intermissions. Together, these elements make the album feel at once laudably unique and endearingly familiar while also revealing (and justifying) why it took so long for such a passion project to be completed.

Ingeniously, Infernal simultaneously pays tribute to the Phideaux legacy and etches itself as a wildly ambitious, enthralling, and fresh entry into it. Although it can be a bit incongruent and underwhelming at first, those who fully internalize all that it offers—and appreciate what it’s doing both expectedly and differently—will find it to be another benchmark creation in the catalog of one of the most distinctive and essential artists in modern progressive rock. Taking that into consideration, a new question must be asked: Is it Phideaux’s greatest achievement to date?

Well, it could be.