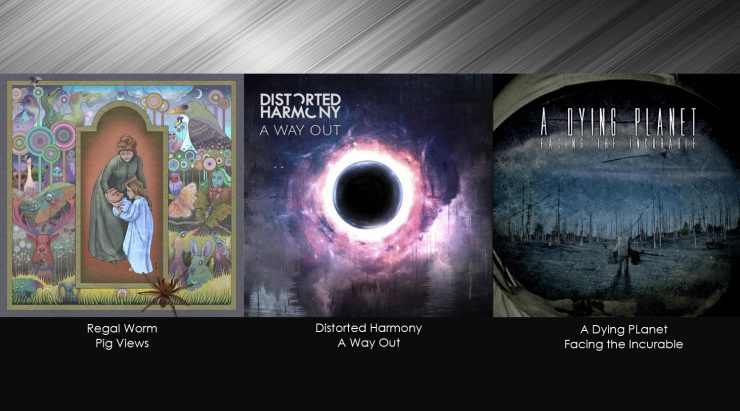 A look at some great albums that have been released in the past few months.

Pig Views is the third album from Jarrod Gosling’s eccentric Canterbury Prog-esque alter-ego, Regal Worm, featuring tales of vampires, anti-christs, volcanoes, the majesty of the sun and more. The music is eclectic, fun, and original. There’s a wide range of instrumentation, vocal arrangements and a diverse approach to songwriting making this album an alternative listening experience to a music landscape dominated by more aggressive, heavy music. The long epic “The Dreaded Lurg” clocks in at 14 minutes and of course features flutes among the cacophony of instruments.

A Way Out is the 3rd album by the Modern Prog Metallers Distorted Harmony and is the first album to be released with the new expanded line up to include 2 guitarists. Based out of Israel, the band stretch themselves on this outing bridging influences from Devin Townsend, Dream Theater to Porcupine Tree, and Periphery. The production is top notch and the songwriting showing tremendous growth from the group’s heralded previous albums. Singer Michael Rose is superb throughout skillfully combining solid rock pipes with enough growl to catch your attention.

A Dying Planet was formed by the brothers Jasun and Troy Tipton of Zero Hour, Cynthesis, and Abnormal Thought Patterns. The debut album is a prog metal powerhouse with only 6 songs, the first two of which clock in at 14 and 10 minutes. The former “Resist” covers a lot of territory and checks nearly every prog metal box, from soaring vocals, to thunderous drum patterns and guitar shredding, leaving you satisfied after just the first track. While the band do not break any new ground with their debut album, the certainly lay the groundwork for a promising run up ahead.