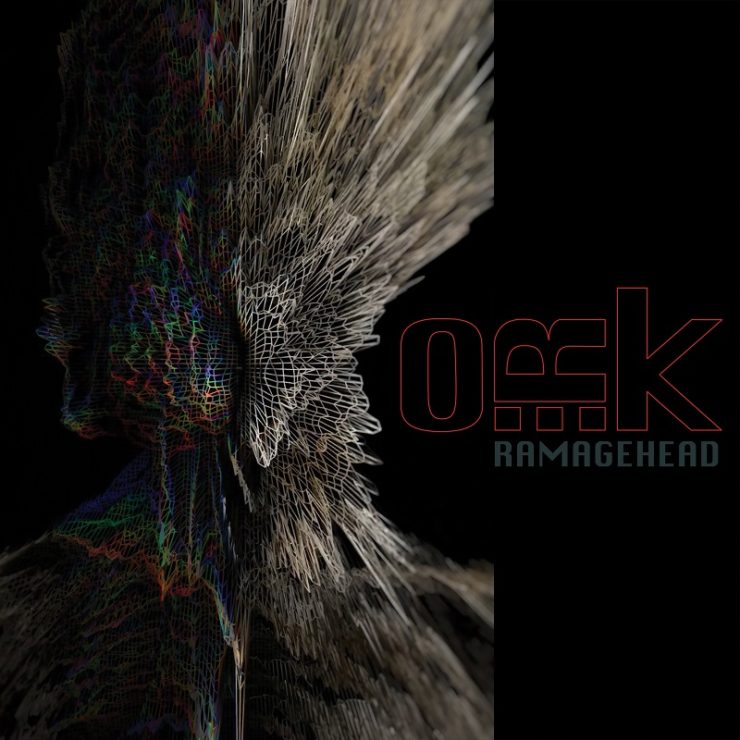 Considering the pedigree of players involved—bassist Colin Edwin (Porcupine Tree, Tim Bowness), vocalist/film composer Lorenzo Esposito Fornasari (LEF for short), guitarist Carmelo Pipitone (Marta Sui Tubi), and drummer Pat Mastelotta (King Crimson)—it’s no surprise that O.R.k’s third studio LP, Ramagehead, comes with high expectations. Fortunately, it undoubtedly lives up to them, as its resourceful fusions of industrial, progressive, and ambient rock stylings make it a very worthy follow-up to its predecessors and a must-hear for fans of the members’ outside projects. At times destructively gothic and rustically peculiar, it’s a whirlwind of enchanting ideas and inventive changes that reveals more absorbing layers with each listen.

Recorded last year in Italy, the UK, and America, the LP features guest vocalist Serj Tankian (System of a Down) and was mixed by Adrian Benavides and Grammy-winner Marc Urselli (U2, Foo Fighters). Its cover art was done by Tool’s Adam Jones, too. As for its sound and scope, Edwin clarifies that although Ramagehead isn’t an overt concept album, its main theme revolves around “the everyday bewilderment brought about by the uncertain times we’re living in, and the constant confusing information overload that we are all subjected to in today’s post-fact environment.” He also calls it their “most intense, ambitious and accessible work to date,” and it’s hard to disagree once you fully grasp Ramagehead’s vast array of gritty forcefulness and organic delicacies.

Opener “Kneel to Nothing” is immediately fascinating, with a bleak blend of dissonant tones, crunchy guitar riffs, foreboding rhythms, and gruff vocals taking over while subtler elements—acoustic guitar strums, earthily stacked singing, and pastoral percussion—glide in-between the frenzy. It’s a wonderfully puzzling and imaginative collage of opposites that yields a characteristic environment perfect for devotees of entrancingly macabre yet melodic aural assaults. Luckily, subsequent tracks like “Signals Erased” and “Strangled Words” maintain that chaotic splendor; specifically, the former scatters grungy guitar loops (reminiscent of early Radiohead, honestly) and angelic detours around its beautifully hellish landscape, whereas the latter places acoustic guitar strums, evocative piano notes, and (near the end) heartbreaking reverse effects into the fray to generate gorgeously polarized sentiments. Even at its most relentlessly heavy, Ramagehead invites you to discover more and more beguiling shades.

That said, the record arguably shines most during its softer majorities. For instance, “Beyond Sight” is lusciously tribalistic due to its haunting harmonies, breathable syncopation, and miscellaneous ethereal touches. Afterward, Tankian’s tasteful bellows make “Black Blooms” even more of an ingeniously horrific and dynamic ballad (as do Pipitone and Fornasari’s respective shrieks). In contrast, “Time Corroded” and “Down the Road” are relatively mellow, warm, and symphonic, with a ton of superb interplay and atypical imagination between the instruments. Of course, the two-part “Some Other Rainbow” delights, too, especially in how the menacingly idyllic and urgent first entry complements the more developed and devastating hodgepodges of its continuation. Combined, they make “Some Other Rainbow” the best piece of the set without question.

Ramagehead is a work of art whose outstanding balance of sinister and serene moments—almost all of which are delivered via resourcefully uncategorical and multifaceted arrangements—keep you emotionally and intellectually spellbound from start to finish. Remarkably, the core quartet unify their individual tastes and techniques into a singular vision that’s as riveting technically as it is creatively, and Tankian’s appearance, while brief, certainly has a profound impact as well. Evil and exquisite in equal measure, Ramagehead is a challenging journey you don’t want to miss.

Key Tracks: Black Blooms, Some Other Rainbow, Kneel to Nothing