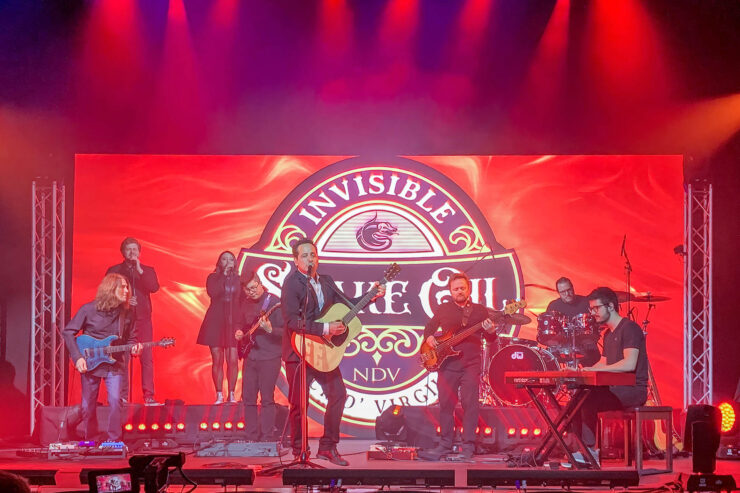 Well you don’t need me to tell you 2020 and 2021 have been gig starved years, and many artists have turned to different creative ways to keep music live: from the Prog From Home extravaganza to an online Morsefest!

This week, it was the turn of Nick D’Virgilio whose eclectic Invisible album I reviewed for The Prog Report almost a year ago in June 2020 https://progreport.com/nick-dvirgilio-invisible-album-review/ A concept album, it cried out for a live presentation and, given the lockdown circumstances, Nick turned to his Sweetwater crew and other friends to record this version which was broadcast online. Those who have seen Nick in performance, especially as lead singer of Spock’s Beard, will know that as well as an incredible musician, he’s also a entrancing and energetic frontman. Add to that a killer live band and an amazing sound mix, and you have a recipe for a brilliant live show. As a viewer it was clear from the start that the production values were of the highest standard and when the high energy “Turn Your Life Around” kicked in I found myself thinking – this sounds even better than I remember it on the album!

Performing in front of an enormous video wall, modern prog’s finest video artist, Christian Rios, provides a backdrop that shifts with the moods of the music: from the frantic beats of “Money (That’s What I Want)” to the mellow sunset of Waiting “For No One” (shout out for Don Carr’s guitar licks on this one!). The Spock’sy “Snake Oil Salesman” shows this incredibly tight band being powered along by Ryan Holquist on drums (kudos for nailing NDV’s original parts) and Andy Rice on bass, while Where’s The Passion is a vocal tour de force for NDV – spine tingling moments in that one. Jacob Dupre dazzles on the keyboard throughout but particularly on the shredding into to “Mercy,” whose London imagery is a wonderful accompaniment to the shifting time signatures and dynamics.

As with the album, the styles shift throughout the set, yet it’s seamless when the horn section joins for “In My Bones”, before the riffs and electronica of “Wrong Time Wrong Place” take over. A very clever combination of looped vocals and visuals find multiple NDV’s on screen covering the parts in this crazy tune, with a staggering Tom Morello-esque noisy/scratchy guitar solo!

“Not My Time To Say Goodbye” has shining harmonies with Nick’s daughter Sophia joining her dad harmonizing, as the show powers through riffs and reprises from throughout the album to finale “I Know The Way,” which I’ll admit I was singing along to solo… before giving the whole entourage my own standing ovation!

As many on the in-show chat said, the performance needs to get a wider release in video and audio from. If you liked the original album, this is it on steroids and then some!

Well done to NDV and crew and here’s hoping when live shows return this becomes a tour.

You can watch it here: https://boxoffice.mandolin.com/collections/nick-dvirgilio