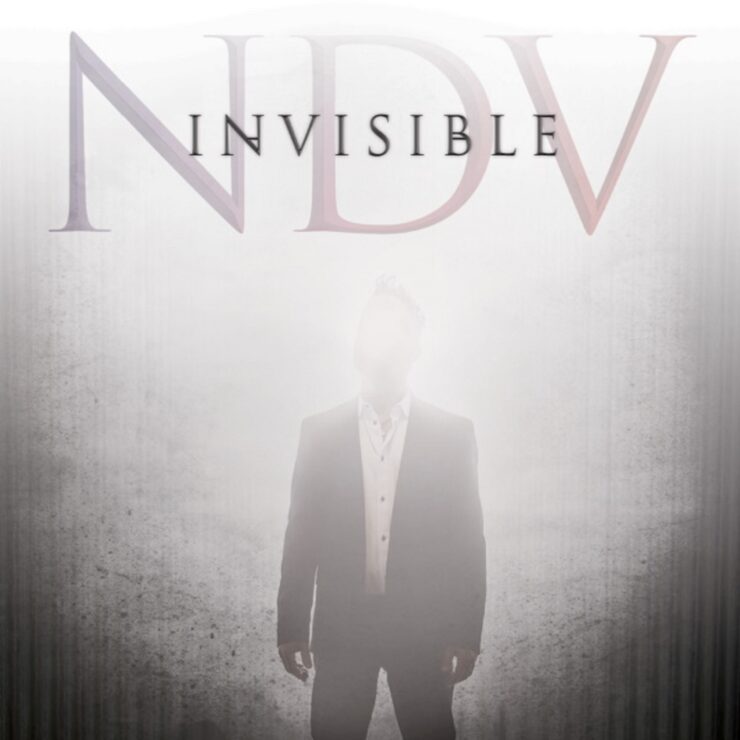 Readers of this site probably don’t need me to explain who Nick D’Virgilio is, right? He’s someone who has been very much “Visible” in the world of Prog since the debut album by Spock’s Beard in 1994, through the years when he was front man of that band, moving into bands like Big Big Train and The Fringe, as well as guesting/ playing sessions with Genesis, Tears for Fears, Peter Gabriel and Mystery. Add to that several years as a band leader in Cirque Du Soliel, and being ambassador and video blogger for Sweetwater, and it’s understandable why your shelves aren’t filled with a bunch of NDV solo albums! However, with Invisible landing, things are ramped up quite substantially!

To say that this album is a follow up to 2001’s Karma or the Pieces EP of 2011 is to understate what is presented in this fine album. I’m not going to get into what’s prog and what isn’t prog, save to say that this is an eclectic rock album with an underpinning concept that runs through it. While not tied to a strict character driven narrative, this is the story of a life – a person facing the challenges many of us face day to day: loneliness, friendship, work, money, failure, redemption, faith, decisions…and to that extent the every-person aspect means the songs will mean different things to different people – which to me is the sign of a well written lyric.

NDV-2020 is a different person than the person who made Karma and this album presents an enormous variety of styles and sounds – some traditional, some experimental – in a really rich soundscape (yes, it’s an album for the headphones!). Let’s take a journey through the tracks…

It’s probably not the opening you expected, but the lush strings of “Prelude”, recorded at Abbey Road Studios, are a gentle lead in to the first single “Invisible”. We hear the voice of a man in anguish and confusion, trapped in his life. The song has a simple backing but the strings rejoin towards the end, before the electronica in the intro of “Turn Your Life Around” draws us into this riff-heavy tune. Propelled by Nick’s signature drumming, he’s joined by Frost*s Jem Godfrey on keys plus his The Fringe band mates (Randy McStine and Jonas Reingold), and the track twists and turns through its time signatures. There’s a small moment of detail (which this album is full of) at 2:15 where the closing chords of the first section are doubled by strings – these sonic treats just show how well crafted this album is. The main body of this questioning song is extremely strong, as all the elements collide with Nick’s vocals, before going back to the intro riff, and the track concludes with the power trio being joined by the orchestra at its cinematic best.

Gear shift to the next track, “I’m Gone”, and it’s NDV’s voice that lets you know you aren’t listening to Daft Punk and Pharrel! Nick has never hidden his love of soul and funk and this song gives full reign to that. But it doesn’t sound out of place as the character is confused, and his head is spinning but… “I could learn to like this” as he moves away from his old life and steps into what lies ahead. Things seem to be on the up as “Money (That’s What I Want)” comes next, but this darker version is a bit like the evil cousin of the version you may know by the Beatles. And so it seems that, despite success, our subject is still alone and “Waiting For No One”. This strong track wouldn’t sound out of place on Peter Gabriel’s debut solo album, and the piano is joined by a brass section, as Nick laments that Miss Fortune/ misfortune is a “close personal friend” – this is a truly stand out track which shows an incredible talent Nick is, even when separated from his drum kit.

A corner is turned, as “Snake Oil Salesman” kicks in, which is a joyous, air punching anthem of positivity, with a cool keyboard riff by Ed Goldfarb – traces here of some of Nick’s finest Beard moments as he sings high up in his range. It’s also one of the tracks to feature a fabulous rhythm section combination as Nick pairs up with Tony Levin. “Where’s The Passion” is a soundtrack worthy song – “Dig down deep and reach up to the stars, and you’ll find peace of mind with yourself” – its positive message of self discovery is infectious. The ending guitar solo by Randy McStine, as the orchestra plays is another album high point.

Yet another killer lead in brings us to “Mercy” – once again Nick effortlessly combines his very best drum chops and riffing with a song that isn’t just a technical exercise. Keys again provide a brilliant moment with Mr Godfrey coloring the slamming backing with pure shred. Lyrically our hero is “racing down the track” in his life journey, which is completely in keeping with the backing.

The magical moments keep coming as Paul Gilbert and an Abbey Road recorded orchestra launch “Overcome” in movie soundtrack style. The track itself is a positive anthem – “step into a world that says you can, you can overcome”. The pulsing bass by Jonas Reingold keep the verses moving, before the BVs and orchestra will have you punching the air during the chorus! A saxophone chorus join Cheap Trick’s Rick Nielsen’s gnarly guitar, as the hero of the story moves ahead in his life. Another track overflowing with musical ideas and inventiveness. The rocking “Wrong Place, Wrong Time” is next. Apart from Randy McStine’s guitar solo, everything you hear on this track is NDV, showing the breadth of his talents, including a fun element here, in a nod back to some “Guy Named Sid” / Spock’s counterpoint vocals.

“Not My Time To Say Goodbye” draws together many of the elements that we’ve encountered throughout the album. In what seems to be a near-death experience, the character realizes he has a chance to try again. Musical themes from earlier in the album are reprised with farewell bows for the magnificent orchestra and brass section. The final song, “I Know The Way” is perhaps the most straight ahead song on the album! Reviewing this during an unprecedented period of lockdown, to me, this is a song to allow you to reflect on all that is good and positive in our lives – it’s the perfect track for a head-clearing walk in the fresh air, and brings this strong album to a great conclusion.

With respect to all of his previous output, for me this album is a pinnacle in Nick’s discography. Compositionally, lyrically, and in arrangement and performance, Nick D’Virgilio reaches a new level with Invisible. Combining his talents with a great selection of guests (that includes all of his immediate family on vocals at some point!) and a concept and lyrical themes that anyone can buy into, you have a very strong album that definitely merits your investigation.

Released on June 26, 2020.
Key Tracks: Turn Your Life Around, Where’s The Passion, Not My Time To Say Goodbye