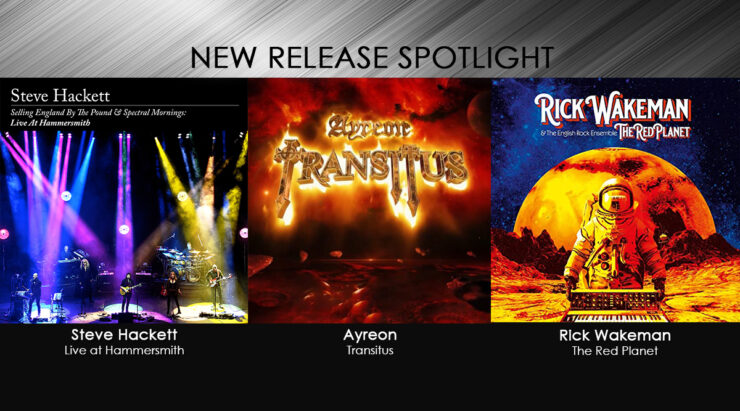 Following in a continuing trend of releasing a live album every year, guitar legend Steve Hackett is back with a live recording from his critically acclaimed 2019 UK tour featuring the entire Selling England by the Pound album. The concert was recorded at the Hammersmith Eventim Apollo, the final night of the tour. Hackett is joined by his touring band of Roger King (keyboards), Jonas Reingold (bass), Rob Townsend (saxes/flutes), Craig Blundell (drums and percussion) with Nad Sylvan on vocals. Special guests for this performance were Steve’s brother John Hackett (flute) and Amanda Lehmann (guitar and vocals). The first set of the concert includes tracks from Spectral Mornings, celebrating its 40th anniversary, and his last release, At The Edge Of Light. The second part is the live recording of Selling England by the Pound album in its entirety, plus Déja Vu, a track initiated for the album by Peter Gabriel, but later completed by Steve. Fans of Genesis and Hackett will love these renditions of the Genesis classics.

CD1
1. Intro
2. Every Day
3. Under The Eye of The Sun
4. Fallen Walls And Pedestals
5. Beasts Of Our Time
6. The Virgin And The Gypsy
7. Tigermoth
8. Spectral Mornings
9. The Red Flower Of Tai Chi Blooms Everywhere
10. Clocks – Angel of Mons
11. Dancing With The Moonlit Knight
12. I Know What I Like (In Your Wardrobe)

Ayreon is back with a new album titled Transitus, another magnum opus with multiple guests out on Sept. 25th,. Originally created as a movie concept, Arjen changed course and it became an album due to the pandemic. ‘Transitus’ is inspired by supernatural movies such as The Others, The Changeling and Ghost along with the music of soundtrack composers John Carpenter (Halloween), Ennio Morricone (Once upon a Time in the West) and Jerry Goldsmith (Omen). It is also narrated by one of the most iconic and recognizable voices in sci-fi history, most known from his eight-year stint as Doctor Who, Tom Baker. The cast includes Tommy Karevik (Kamelot), Cammie Gilbert (Oceans of Slumber), as well as Simone Simons (Epica), Dee Snider (Twisted Sister), Joe Satriani, Marty Friedman, and many more.

The 25th studio album from Rick Wakeman, The Red Planet, is the keyboard legend’s return to serious prog. The set includes 8 newly composed pieces, especially for this project, and recalls Wakeman’s critically acclaimed debut album “The Six Wives of Henry VIII” where there were 6 heavy keyboard pieces based around a central subject matter. The album is recorded with a full band of drums, bass, guitars, a wide range of keyboards. The Red Planet is Wakeman’s first progressive rock album with his English Rock Ensemble since Out There in 2003. Fans of the legend will love this new material.