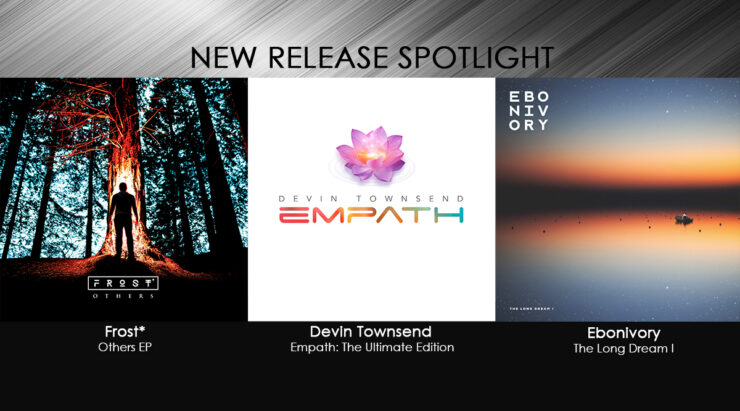 New releases we recommend from Frost, Devin Townsend, and Ebonivory

The New Release Spotlight is a roundup of recent and upcoming releases.

The group led by songwriter/producer Jem Godfrey last released an album in 2016 with Falling Satellites.  They return with an EP of previously unreleased material that hopefully serves as a prelude to some new music.  The 6 songs on the EP continue the sound that was prevalent on the last album with the use of heavy distorted synths, upbeat tempos and strong melodies.  Fans of the band’s previous output will find a lot to enjoy here from the opening frantic nature of “Fathers” to the tribal rhythms of the single “Exhibit A, and “Drown”, a strong epic ballad.

One of the best albums is 2019 getting the specials treatment as Devin Townsend adds on some more bells and whistles to Empath: The Ultimate Edition.  The 4 disc set has the special edition set of the full album and bonus material, but additionally comes with 2 Blu-Ray discs. The first blu-ray contains the 5.1 Surround Sound mix by Devin, with visuals for the full record, plus a stereo visualiser. The second blu-ray contains a load of bonus material, including ‘Acoustically Inclined – Live in Leeds’, a recording from his April 2019 acoustic tour where he performed tracks including ‘Love?’, ‘Deadhead’, ‘Thing Beyond Things’ & more. It also features the full Empath Documentary, a ‘Genesis 5.1 Mixing Lesson’, a full album commentary & more. The four discs sit inside a beautiful art-book that contains new liner notes and images from the making of the album. A must-have for any Devin fan.

Australian proggers Ebonivory release the first of a 2-part concept album titled The Long Dream I. The band that were supposed to tour the US with fellow Ausie’s Caligula’s Horse this year, certainly deliver on this powerful set that is filled with raw emotion, complex rhythms, and soaring melodies. Fans of Caligula’s Horse will appreciate the groups penchant for interesting songwriting, but will also notice the slightly more Djent approach with more aggressive vocals and up-front bass. The pristine production is also worth noting. Standout tracks include the powerful opener “Hanmer Street”, the gorgeous “Cats”, and the nearly 9-minute proggy track “The Bluegums”.

For more on the band visit here: https://www.facebook.com/ebonivoryband/