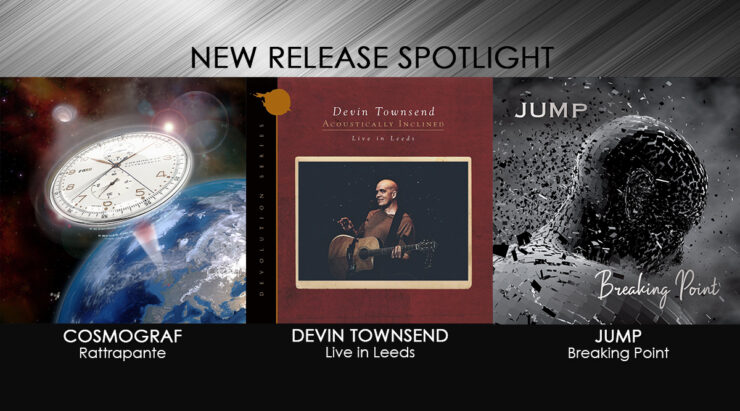 The 8th studio album from Robin Armstrong’s Cosmograf titled ‘Rattrapante’ is described as “a collection of 5 songs about our interaction with time; we measure it, but yet waste it more, it defines our existence and forms our memories.” “Rattrapante is a French word deriving from ‘rattraper’ meaning ‘to catch up or recapture. A Rattrapante chronograph can simultaneously time 2 events such a lap split time and a final race time”, explains Robin Armstrong. The opening track “In 1985” is a heavy epic rocker clocking in at over 12 minutes and sets the stage perfectly.  “I Stick To You” is a gorgeous ballad, while the the closer “Time Will Flow” is an extravagantly arranged number with a ton of parts including narration and orchestration all leading to a grand ending.  Another wonderful album from the always reliable Cosmograf.

In 2019, Devin Townsend did a series of solo acoustic shows. The first of the Devolution Series (a series of quarantine songs and concerts) is a remixed and remastered version of one of those shows titled ‘Live in Leeds’, a show that was originally on the ‘Empath’ Ultimate Edition.  Here Devin is fully engaging and personable, while delivering some fantastic renditions of DT classics and fan favorites.  Fans of Devin that have not yet enjoyed this show, will certainly want this in their collection.

Welsh proggers JUMP released their 14th studio album ‘Breaking Point’. The album is an excellent collection of poetry-laden songs centered around frontman John Dexter Jones’ remarkable story-telling abilities and the band’s top-drawer performances. If you are a fan of Big Big Train, Fish, Marillion or IQ, and are looking for something else to please your senses, JUMP could well be the answer. Each song is a literary work within itself, making the album almost into a collection of musical short stories, delivered with Jones’ purposeful and emotive perspective. From the menace of opener ‘The Heroes’ to the swirling melodies of ‘The Parade’, the album visits many varied musical themes, always accompanied by Jones’ detailed lyrical observation. Heartily recommended, JUMP’s fourteenth album deserves far more than a cursory listen, and is highly deserving of your investment and attention.