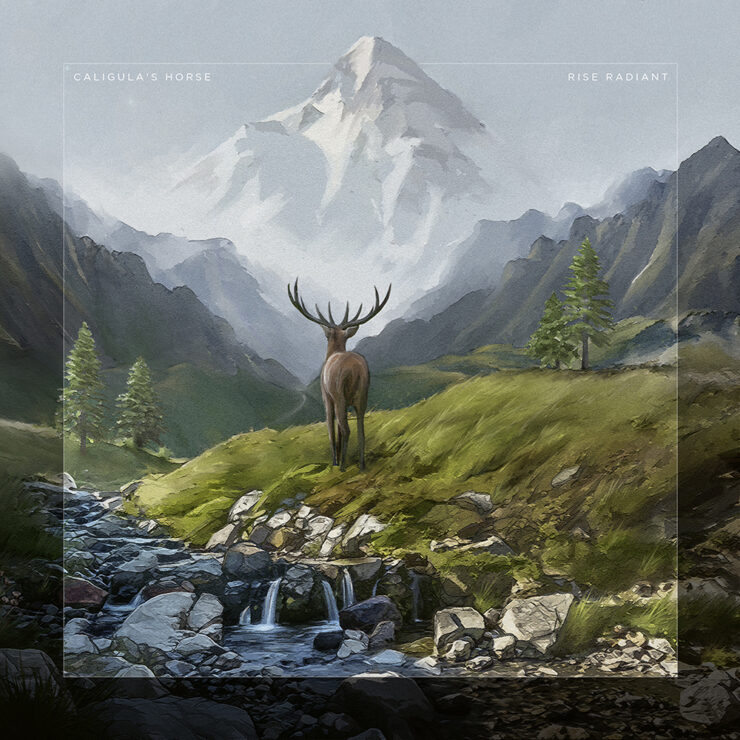 Caligula’s Horse have given themselves the unenviable task of needing to follow up what could be considered a modern classic with the band’s 2017 release, In Contact. If one factors in its predecessor, 2015’s Bloom, then the band certainly has given itself a very tough act to follow. In Contact, for a good year or even two after its release, seemed like it was omni-present in the prog / prog-metal worlds, and it certainly put the band on the map more than ever before. And suddenly, while it feels like not that much time has passed, we find ourselves treated to the next landmark in the band’s discography, a weighty tome of music called Rise Radiant.

Caligula’s Horse (or, C-Horse for short, or better yet, Incitatus to those who know,) is at the forefront of this modern renaissance of bands coming to us from Australia: bands like Karnivool, Voyager, Ne Obliviscaris, and even Caligula’s Horse lead vocalist Jim Grey’s now-defunct band Arcane (whose “Known/Learned” is one of the most underrated albums of the past decade). It could also be said Caligula’s Horse is arguably at the fore of modern progressive metal in general, standing shoulder to shoulder with the heirs apparent to the prog metal throne, Haken. The expectations for the follow-up to Caligula’s Horse’s prior two albums for prog-metal fans around the world are, understandably, quite high.

That said, Rise Radiant does not disappoint. If this band was driving in a car on Germany’s Autobahn, then Rise Radiant would not be a matter of driving at the same speed, but then changing lanes, or exiting entirely, but rather it’s a burst of speed and intensity in the same exact direction the band was already traveling. It is the modern classic sound that Caligula’s Horse is defining as their own – a melting pot of styles of influences they have stirred into a delicious concoction over the years – but, quite simply, with more power. The highs are higher, the heaviness is heavier, the intensity is… well, intensity-er. And it is a fantastic journey for the listener.

What strikes me most when listening to the band, and specifically this album, is the level of craftsmanship that goes into it. Every single note feels entirely purposeful, weighed, and nothing is wasted. When distorted chords are played on the rhythm guitar, there is not the slightest hint of any kind of intentional feedback through palm-muting from Adrian Goleby, nor any other slightly out of place elements one might hear in a live setting; everything is so incredibly accurate throughout this album. One could listen and imagine every single note streaming by in a MIDI notation. But that doesn’t mean it sounds overly-perfect, like the comparisons made between Megadeth’s Countdown to Extinction vs. Rust in Peace or Youthanasia back in the ’90s. It feels incredibly lively, crisp, emotive, and as dynamic as the band has always sounded. But the way every single note is chosen so purposefully, between all of the vocal tracks, the interplay between the guitars, the percussive root notes on the bass, and bombastic drum parts being played, the harmony happening among it all is just breathtaking. Even the room-shaking bass hits and dives for emphasis are at just the right moments to elevate the experience even higher.

Nowhere is this more evident than on the album’s grand finale (my apologies for skipping to the end, but my excitement can’t be contained for this song,) “The Ascent”. As great as past epics from the band are, such as “Dragonfly” from Bloom, or “Graves” from In Contact, “The Ascent” sees the band creating on a higher level of composition. And that’s exactly what it is, composition. By the end of the song, and album, the listener – whether unwittingly or not – has the notion that Caligula’s Horse is composing in a manner that a composer from the (super proggy) romantic period of classical music would, except the final product is slightly different. Rather than Wagner or Liszt, Caligula’s Horse is giving us a symphony of metal. Not to be confused with symphonic metal, for this is an entirely different beast, but this song feels like it could be what Caligula’s Horse has been leading up to for the past decade. It feels cataclysmic, let alone epic, and yet harmoniously enchanting all at the same time. The final three songs of the album, “Valkyrie”, “Autumn”, and the aforementioned “The Ascent” form what seems to be a trilogy of sorts, and “The Ascent” is the grand finale we never knew we were waiting for. It’s a few minutes shorter than the previous album’s epic, but it does not feel short by any means. By the end, it feels like we have come through the other side, not unscathed, but still alive. Like Winston Churchill said, “if you’re going through hell, keep going.”

Admittedly, I just sort of ate dessert before dinner, but as far as the rest of the album preceding the trilogy is concerned, it’s all very excellent material that we would expect from this band. My personal favorite song of the rest of the bunch is “Salt,” which feels cinematic and larger than life in its own right, beginning with light, twinkly piano melody before launching us into blast beats and double bass, and away we go. The chorus might be the greatest example of the layers and layers of mathematics going into harmony, with Jim Grey singing high and sweet, akin to Leprous’ Einar Solberg on their newer material, with seemingly every mathematically-correct note in every octave as low as those eight-string guitars will go included to make everything sound as complete and bittersweet as possible. The refrain is an unexpected moment of quirky, syncopated melody in unison between vocal, piano, and if one listens carefully, even Josh Griffin’s ride cymbal. We’re then taken into a haunting guitar solo from Sam Vallen, complete with key change modulation that would fit in perfectly with any Portnoy-era Dream Theater dark ballad. As much as I love the trilogy at the end of the album, and of course my favorites from past albums, “Salt” might be on its way to becoming my favorite song by Caligula’s Horse.

It’s so easy for the rest of the album (as much as I even hate to think of it as “the rest of” when compared to the finale) to be overshadowed by what comes later, but it’s all fantastic in its own right. There are intentionally auto-tuned vocal moments that are reminiscent of Imogen Heap’s Hide and Seek, slightly djent-y guitar work reminiscent of TesseracT (especially during the Ashe Austin O’Hara era of the band,) and soaring A Perfect Circle Mer de Noms Maynard-esque vocals everywhere but always infinitely catchy like Animosity-era Sevendust, a fantastic light and melodic bass solo courtesy of Dale Prinsse, and tight, crunchy, punchy production that would make Devin Townsend’s ears perk up. The album’s lead single, “The Tempest,” is the perfect whetting of the appetite for what Rise Radiant will later serve up, especially as it’s the album opener, but believe me when I say this is an album the listener should be excited to hear for the first time. Regardless of what corner of the prog world you live in when coming to this album, it deserves your attention, and you’ll likely come away liking at least something about it, if not loving it altogether.

Where Caligula’s Horse goes from here is anyone’s guess, but it’s going to be extremely difficult to out-do Rise Radiant, with its Haken’s The Mountain x Marbin’s The Last Chapter of Dreaming beautiful stag-filled cover art, to the sonic journey found within. I honestly didn’t know how they could improve upon what their previous two albums contained, and maybe some will prefer one of those over this, but there’s no denying the incredible work they have achieved with this album. I welcome them to out-do themselves over and over again.

Release Date: May 22, 2020 on Inside Out Music
Key tracks: Salt, Valkyrie, Autumn, The Ascent